The school day for Bailey Holt, a 15-year-old Kentucky high school student, started like any other, but it ended with the tragic death of the young woman who was remembered for her always happy personality and who wanted to be a labor and delivery nurse some day.

Holt was identified as one of the two deceased students who were slain by a high school classmate in a school shooting that unfolded on January 23, 2018 at Marshall County High School in Benton, Kentucky, a rural community of about 4,500 people.

Bailey Holt and Preston Ryan Cope, also 15, both died in the attack, which broke out as students gathered in a commons area of the Kentucky high school. The motive was not yet clear, but 20 students in all were injured in the shooting and its aftermath (15 by gunfire), and authorities revealed that the suspected shooter is 15-years-old and in custody. His name has not yet been released. He was a fellow student.

“It’s crazy how you go from laughing with your friends to hearing several gun shots back to back in the next hallway,” wrote one traumatized student on Facebook. “No one knows what to do we all just look at each other waiting for someone else to say something. What feels like hours we locked ourself in a tiny room while hearing our friends scream. But all we know to do is hide and stay quiet. I feel terrible for the kids that could not get in a room and had to keep running while scared for their lives. I feel terrible for Bailey Holt and Preston Cope.”

1. Bailey Was Remembered as ‘Always So Happy’ & Her Boyfriend Was Also Shot, Reports Say

Friends remembered Bailey’s friendly demeanor in tributes on social media. “Bailey holt was always so happy and a great friend we will love you and can’t believe you were taking away from us so soon. But god has definitely gained a beautiful angel.? prayer to her family as they go through all this,” wrote one friend, who shared the above photo.

According to UK Mirror, Bailey’s boyfriend was among those injured. That boy’s Facebook page reads, “Taken by Bailey Holt 6/21/17. |Bowfishing| |Hunting| |Chevy Life|”

FacebookBailey Holt with another of the wounded students.

A relative of that male student wrote on Facebook that he was “stable. He was shot through his right cheek bone just beneath his eye and it passed through his left ear. It’s going to be a couple of days before surgery due to swelling. He has a long road ahead but we will be right there with him. Please just continue to pray for him and the other families as well.”

That boy is expected to make it, but Bailey and Preston will forever be 15. A traumatized friend of the two deceased victims expressed distress on Facebook, writing, “Bailey holt and Preston I’m so sorry you guys had to pass this way it wasn’t fair for you guys to wake up and go to school and have this happen there will be a prayer circle and you will be missed by everyone.”

According to the Courier Journal, authorities believe the shootings were random and that Holt and Cope were not targeted by the gunman.

Police scanner traffic indicated that the shooting was first reported at Marshall County High School at 7:57 a.m. on January 23, with the first 911 call being placed two minutes later. First responders immediately focused on the commons area of the school as a key place where the mayhem unfolded. Eyewitness accounts also indicated that the shooting broke out in the commons area of the school.

Witnesses described how the shooter allegedly appeared “determined” and like “he knew what he was doing” as he went from one student to the next, pulling the trigger. “No one screamed. It was almost completely silent as people just ran. He just ran out of ammo and couldn’t do anything else,” witnesses said, according to UK Mirror.

Bailey Cope died at the high school. Preston Cope was rushed to Vanderbilt University Medical Center in Nashville, where he later died, according to CNN. 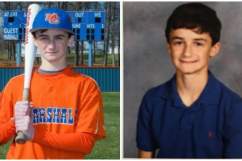 A cousin of Bailey Holt sent me this picture tonight. Investigators say the 15 year old was killed in a shooting at Marshall County High. pic.twitter.com/KgXmXBejnI

Bailey’s mother, Secret Holt, tried desperately to reach her daughter’s cell phone after news of the shooting broke. “Eventually, Bailey called her mother back, but the high school sophomore was unable to speak,” reported WKRN-TV, quoting Secret as saying, “She called me and all I could here was voices, chaos in the background. She couldn’t say anything and I tried to call her name over and over and over and she never responded.”

Bailey’s parents described Bailey as the “perfect daughter” to WKRN, describing how they waited for their daughter to get off the buses that were taking students to safety, but they never got off.

Both Bailey and Preston were remembered as positive personalities. One friend recalled how she never heard “one negative thing come from their mouths.”

“Today on 1-23-18 we lost two of the greatest people I have ever met all because one kid was ‘hurting inside,'” the friend wrote. “…I’m thankful for my injured friends that have stayed strong through their process of healing. Bailey Holt and Preston Cope were two great people, I have never heard one negative thing come from their mouths. I’m glad we made the memories we did with each other. It hurts knowing we won’t be able to share the laughs anymore…”

Preston Cope was remembered for his love of youth baseball. “These boys spent many years together learning the game of baseball and building a friendship, a brotherhood. Preston Cope was a part of that brotherhood. R.I.P. Preston #sluggersforever,” one friend wrote in tribute to Cope, posting the older photos below:

He was also remembered for inspiring other students in the weightlifting room.

The number of victims, unfortunately, grew as the chaos subsided. According to the Kentucky State Police:

One of the wounded victims was named as Daniel Austin. According to CNN, he is “a 17-year-old special needs student” whose parents “called his cell phone incessantly until someone in the emergency room picked up and said Daniel had been shot.” He was shot in an arm that might need amputation, the cable news network reported.

The details on the mass shooting also came from police scanner traffic and from a tweet from Kentucky’s governor as the tragedy unfolded. Authorities have not released any details on motive.

Shortly after the active shooter situation initially unfolded at Marshall County High School, the shooter was in custody.

3. Bailey Holt’s Facebook Page Shows a Love of Family & She Wanted to Become a Nurse

On Facebook, Bailey Holt mostly posted photos with her family. Her profile page contained the quip, “my life is about as organized as the $5 dvd bin at walmart.” Bailey’s photos contain pictures of the beach, of a family Christmas, and of younger relatives.

It was a horrific day for the community of Benton.

One woman wrote on Facebook that her nephew was safe, as frantic family members sought news of loved ones. “Prayers for Marshall County high school! My nephew… is safe and sound! Had to talk to him and hear his voice and tell him I love him. Prayers for all the children and staff, prayers for the injured,” she wrote.

A student tweeted, “Pray for Marshall County High School, I am a student there and we just had a school shooter, multiple students injured, please pray for us.” One mother described to the Courier Journal how her 14-year-old son “was crawling to her on hands and knees in a panic” when she arrived at the school.

4. Students Hid in Closets & the Woods to Escape the Shooter

A terrifying scene unfolded at the school as students hid and ran for their lives. According to the scanner traffic, there was a report of several students hiding in the woods. You can listen to an archive of the police scanner audio here:

The police scanner traffic described a chaotic scene aftermath, in which law enforcement and first responders tended to multiple victims, students were reported to be hiding in closets and the woods, and frantic parents sought information. “As of right now, all patients have been transported that we’re aware of,” police said in the live scanner traffic.

We have JUST received these photos of the school from Air 4: https://t.co/Gq3u6IQ4GC pic.twitter.com/DxSEjg10kb

Another woman wrote on Facebook: “This is my high school. I feel devastated. MCHS is a beautiful, rural community that puts all of its focus and love onto the county high school and no matter how far from home I wander, I will always and forever be a Marshall County Marshal. My heart goes out to my western Kentucky family. We stand with you.”

A long-time resident wrote on social media, “I`ve lived in Marshall County for 60 years , some things you just never expect to happen here , today was one of those things . Rest In Peace Bailey Nicole Holt , age 15 , and Preston Ryan Cope , age 15 , Fly High !”

5. Videos Showed the Chaos & Fear Outside the School in the Shooting’s Aftermath

Some videos have emerged that show the aftermath of the scene. The video above was posted on social media and features a man obtaining eyewitness accounts. In it, a student describes being in the commons area of the school when gunfire broke out. She said that one of her friends was shot. “I’m just startled. I’m trying to gather myself that this is actually happening,” she said.

“I was talking to one of my buddies in the commons, and he was shot in the chest,” said another student in the video. Witnesses said personal items were scattered throughout the school’s campus, such as gym bags. Another witness described multiple students fleeing the school.

SCHOOL SHOOTING VIDEO: Video from The Marshall County Tribune-Courier shows chaotic scene at Marshall County High School after a shooter killed one and injured multiple. Details are still coming in. Check back for updates. pic.twitter.com/fCCu7AAFcc

According to the scanner traffic, one victim had a shot to the torso and one had a graze wound. The governor provided some details on Twitter right way, writing in his first post, “Tragic shooting at Marshall County HS…Shooter is in custody, one confirmed fatality, multiple others wounded…Much yet unknown…Please do not speculate or spread hearsay…Let’s let the first responders do their job and be grateful that they are there to do it for us…” Tragically, a second student then passed away.

This post will be updated as more information is learned about Bailey Holt.