Chan’s parents, Dennis and Yvonne Chan, emigrated to the United States from China in the 70s. Chan and her two younger sisters, Elaine and Michelle, were raised just outside of Boston, Massachusetts.

Priscilla Chan was the first person in her family to graduate from college. After graduating from Harvard University, she decided to further her education by going to medical school. She enrolled at the University of California, San Francisco, in 2008, and graduated in 2012, the same year that she married Zuckerberg.

Chan and Zuckerberg are the proud parents of two daughters, Max and August. Chan currently works as a pediatrician and does philanthropy work. She has an estimated net worth of $50 billion, according to CelebrityNetWorth.

1. Priscilla Married Zuckerberg on May 19, 2012, in the Backyard of Their California Home

Today is Priscilla and my five-year wedding anniversary. I promised Priscilla that every year we'd have a honeymoon to celebrate our marriage. This year we're traveling around the US and we'll be spending our honeymoon in rural Maine. One lesson I've learned from marriage is that exploring together just gets better over time.

On May 19, 2012, Chan and Zuckerberg “secretly” exchanged vows in front of an intimate group of family and friends in the backyard of their home in Palo Alto, California. About 100 guests looked on as the couple said their “I Do’s,” many of said guests thinking that they were attending a graduation party for Chan. She was given a ruby wedding ring that was designed by her now-husband.

The couple’s marriage was announced on Facebook when Zuckerberg added a life event. An update on his account read “Married Priscilla Chan” after the big day.

According to E! News, Chan wore a $4,700 ivory-hued gown designed by Claire Pettibone.

“Intricate floral embroidery and matte, satin-lined sequins cover the entire gown, including its illusion jewel neckline, sheer back and chapel-length train,” the outlet reported at the time.

The wedding was catered by Palo Alto Sol and Fuki Sushi, two of Chan and Zuckerberg’s favorite eateries, and there was a special performance by Green Day’s Billie Joe Armstrong, according to the Washington Post.

Chan met Zuckerberg at a college party. They dated for about nine years before deciding to make things official.

Each year, on their wedding anniversary, the couple takes a “honeymoon.” In May 2017, they enjoyed some downtime in rural Maine. No word on where they’re heading in 2018.

Priscilla and I are so happy to welcome our daughter August!

Chan had some difficulties getting pregnant and suffered a few miscarriages before welcoming her first child. Zuckerberg shared a little bit about their struggle to conceive when he announced that they were expecting a daughter back in 2015.

“We want to share one experience to start. We’ve been trying to have a child for a couple of years and have had three miscarriages along the way. You feel so hopeful when you learn you’re going to have a child. You start imagining who they’ll become and dreaming of hopes for their future. You start making plans, and then they’re gone. It’s a lonely experience. Most people don’t discuss miscarriages because you worry your problems will distance you or reflect upon you — as if you’re defective or did something to cause this. So you struggle on your own,” Zuckerberg’s Facebook post read, in part.

A few months later, Chan gave birth to Maxima Chan Zuckerberg. The couple announced the arrival of their new addition in a letter to their newborn daughter, which was posted to Facebook. You can read it here.

Over the past couple of years, Zuckerberg and Chan have used Facebook to keep people updated on their family life. Zuckerberg often posts about his children, especially when they hit major milestones. For example, the couple shared a photo before Max’s first day of pre-school back in January.

“First day of preschool,” Zuckerberg wrote. “They grow up so quickly.”

3. Dr.Priscilla Chan  has an MD from University of California

Bringing in the new year with a smile on his face :)

From there, she enrolled at Harvard University, where she met Zuckerberg. He studied psychology and computer science prior to launching the ubiquitous Facebook social media platform, while she studied biology. She graduated with a bachelor’s degree after four years, according to the New York Times. She was the first person in her family to graduate from college.

Zuckerberg left college during his sophomore year. In between his departure and Chan’s graduation and her subsequent move to Palo Alto, Chan and Zuckerberg were not actually together, according to David Kirkpatrick, author of The Facebook Effect.

“Separated by 3,000 miles, Mr. Zuckerberg and Ms. Chan split up for awhile and Mr. Zuckerberg saw other women, including an undergraduate from the University of California, Berkeley, according to Mr. Kirkpatrick’s book,” the New York Times reported.

In 2008, Chan enrolled in the University of California, San Francisco’s school of medicine. Four years later, she graduated, around the time that she and Zuckerberg got married.

After Chan graduated from Harvard, she went on to teach 4th and 5th grade science at the Harker School in California, before enrolling in medical school.

After medical school, she completed her pediatric residency at the University of California San Francisco Medical Center in 2015. At the time, Zuckerberg took to Facebook to congratulate his wife.

“Congratulations to Dr. Priscilla Chan for finishing your medical residency today! I’m so proud of you for all of the lives you’ve saved and families you’ve touched. You’re a gift to our community, and I’m looking forward to seeing you make an even bigger impact in education, health and all your work with the underserved in your next chapter,” Zuckerberg’s post read.

Chan went on to practice as a pediatrician, taking a job at the Zuckerberg San Francisco General Hospital and Trauma Center, a position that she kept until 2017, according to her LinkedIn account.

5. She Is the Co-Founder & CEO of a Non-Profit Private School

Chan has dedicated much of her life to philanthropy work. According to CNN, she and Zuckerberg had donated more than $320 million to school systems as of 2015.

During her time as a teacher, she realized her love for teaching and her passion for “integrating her work in health and education through designing and implementing interventions addressing adverse childhood experiences.”

In 2015, Chan became the CEO of The Primary School, a non-profit private school in the Palo Alto area. The private school “serves low-income families living in East Palo Alto and East Menlo Park,” and does not have a tuition.

“Our approach breaks down barriers between healthcare and education, and early childhood and K-12 education, by bringing parents, teachers, and health professionals together in a team-based approach to support each child’s growth. By integrating education, health, and family support services starting at birth, TPS will expand the traditional definition of ‘school’ in order to prepare all children to succeed in college, career, and life,” reads an excerpt from the school’s website.

In 2015, she co-founded the Chan Zuckerberg Initiative, also known as CZI, with her husband. You can read the organization’s mission statement below.

“The Chan Zuckerberg Initiative, founded by Mark Zuckerberg and Priscilla Chan in December 2015, is a new kind of philanthropic organization that brings together world-class engineering, grant-making, impact investing, policy, and advocacy work. Our initial areas of focus include supporting science through basic biomedical research and education through personalized learning. We are also exploring other issues tied to the promotion of equal opportunity including access to affordable housing and criminal justice reform.”

“We look for bold ideas — regardless of structure and stage — and help them scale by pairing world-class engineers with subject matter experts to build tools that accelerate the pace of social progress. We make long-term investments because important breakthroughs often take decades, or even centuries.”

“We engage directly in the communities we serve because no one understands our society’s challenges like those who live them every day. These partners help us identify problems and opportunities, learn fast, and iterate toward our goals for the next century. We strive to be lifelong learners who work collaboratively across functions in service of our mission.”

In June 2017, Recode reported that the Chan Zuckerberg Initiative had more then $62.5 billion in assets. 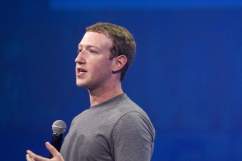 Mark Zuckerberg Net Worth: 5 Fast Facts You Need to Know

Loading more stories
wpDiscuz
0
0
Would love your thoughts, please comment.x
()
x
| Reply
Priscilla Chan is the wife of Facebook's, Mark Zuckerberg. She has an estimated net worth of $50 billion. She's a pediatrician, philanthropist, and mom of two. Here's what you need to know.