Saturday night at a vigil in protest of the Sacramento Sheriff’s Department’s purported role in the shooting of Stephon Clark, it was reported, after ordering protesters out of the way, a sheriff’s SUV struck Wanda Cleveland, 61, in the street, who in the video of the incident appears to be attempting to cross the street in front of the stopped sheriff’s SUV. It appears Cleveland waved her arm indicating for the car to wait as she crossed, but she was struck by the officer’s vehicle. People can be heard screaming as she is hit and witnesses said the sheriff’s deputy left the scene.

Wanda Cleveland about to be struck by SCSD SUV

The protest Saturday night was in response to the March 18 police shooting death of Clark, father of two, who was unarmed. The New York Times reported that Clark, the father of two, was shot eight times “mostly in his back, according to an independent autopsy released Friday, raising significant questions about the police account that he was a threat to officers when he was hit.”

According to reports, Cleveland said her arthritic knees were giving her trouble and she was getting off the street, and was very near the curb it appears, when the sheriff’s deputy’s vehicle struck her.

After being released from the hospital, Cleveland told a reporter the deputy, “…never even stopped. It was a hit and run. If I did that I’d be charged.”

Vigil organizers said the effort was directed at Sacramento County Sheriff’s Department who organizers say guided the Sacramento Police officers to Clark from a sheriff’s helicopter as they saw him break a car window. Activists believe in addition to the SPD being held responsible, one told the Sacramento Bee, the sheriff’s department has responsibility as well as they orchestrated and directed the chase. Jamier Sale of the ANSWER Coalition told the Sacramento Bee in part, “…(Sacramento police officers) didn’t just find themselves there. They were directed to this position by this other officer in a helicopter.”

The grandmother of three hit by the sheriff’s deputy, Wanda Cleveland, has a history of local activism, especially involved in the fight to raise the minimum wage and to create community gardens in vacant city lots for community use. This is not her first encounter with police.

Koseff reported that a witness said “a group of protesters had surrounded sheriff’s department cruiser, was throwing eggs at it. When driver attempted to leave, they knocked woman down.”

Dominique Poydras said a group of protesters had surrounded sheriff's department cruiser, was throwing eggs at it. When driver attempted to leave, they knocked woman down.

"It was serious enough for her to go the hospital. She didn't get up," Poydras said https://t.co/GELGMexkA5

“It was serious enough for her to go the hospital. She didn’t get up,” Poydras said

The video of Cleveland being struck was captured by Guy Danilowitz of the National Lawyers Guild.

Friends of the woman struck by a Sacramento County Sheriff's Vehicle at a #StephonClark vigil have identified her as 61-year-old Wanda Cleveland.

“I heard wheels spin. And then I saw her body flung to the curve,” Tifanei Ressl-Moyer told Koseff. “The vehicle sped off and some protesters went after them.”

Witnesses and the struck protester said the sheriff’s vehicle left the scene.

This is the license plate of the #Sacramento County Sheriff SUV that commited the hit and run on protestor, 61 yr old Wanda Cleveland, whom was peacefully protesting. Sheriff did not stop.
She was injured and taken away in an ambulance. #StephonClark pic.twitter.com/dh0KnErPYI

The Sacramento Sheriff’s Department posted a statement on its website early Sunday morning. Deputies and other law enforcement agencies, it said, responded to the planned protest and at “8:40 P.M. Sheriff’s Deputies driving two marked Sacramento County Sheriff’s Department patrol vehicles traveling westbound on Florin Road from Stockton Boulevard became surrounded by a group of protesters. As protesters approached both of the marked vehicles, they began yelling while pounding and kicking the vehicles’ exterior. As one of the Sheriff’s Deputies was driving, a collision occurred involving the Sheriff’s patrol vehicle and a protester who was walking in the roadway. The collision occurred while the patrol vehicle was traveling at slow speeds.”

The statement adds that Cleveland, whom it does not name, is first described as protester and then as a “pedestrian” when recounting rescue personnel responding to the incident saying the Sacremento Fire Department “transported the involved pedestrian to an area hospital for treatment. The pedestrian sustained minor injuries.”

The statement also reads that the “Sheriff’s Department vehicle sustained scratches, dents, and a shattered rear window. The damage to the vehicle was not a result of the collision involving the pedestrian but was caused by vandals in the crowd.”

“The Sacramento County Sheriff’s Department is conducting an internal review of the incident and the California Highway Patrol is investigating the collision.”

3. Cleveland is a Member of the Alliance of Californians for Community Empowerment Action, Sacramento Chapter

“From neighbors taking back vacant lots and creating community gardens, to being on the front-line of major local policy campaigns like raising the minimum wage, our members are growing a stronger chapter every day,” is how the Alliance of Californians for Community Empowerment Action (ACCE Action) describes itself.

The statewide group, with six local offices in Los Angeles, San Francisco, Oakland, Contra Costa and Sacramento, is primarily and currently focused on rent control issues based on its Twitter feed. But each office and each chapter also advocates for issues related to its community’s local needs.

“Raising up the voices of low income, immigrant and working families across California,” it sasy on its Twitter account, @CalOrganzie.

Rent control is a win win for everyone. It guarantees profit for landlords and guarantees stability for tenants!

“[Landlords] have to make money, But… they can’t just increase (rent) 60 percent. If there have to be increases, it … has to be gradual.”https://t.co/O7sDxAe7y0

But each office has more than one chapter and each are focused on specific campaigns. The Sacramento office chapter campaigns include ‘Worker Justice,’ “fighting to raise the minimum wage and win paid sick days and other worker protections for low wage workers,” and ‘Taking Back Vacant Lots and Creating Community Spaces.’ The latter effort has members converting vacant lots into community gardens. But it’s the ‘Worker Justice’ campaign where Cleveland has been very vocal. On its website, the ACCE Action Sacramento pointed to a local media report on their and other groups’ efforts to see the minimum wage raised.

4. Cleveland Spoke to Sacramento City Council About Minimum Wage Vote. Two Weeks Later, Before Same Board, She Was Arrested

“I’m not going to scream and yell,” she began. “The city manager probably deserves a raise, but so does every one of us…I know of a worker right now that works 10 hours a day and gets paid barely minimum wage. And she’s my daughter…”

Cleveland goes on to explain, the in the 1-minute clip that she, her daughter and her three grandchildren live in a one-bedroom house on a farm and that she, Cleveland, is disabled. She says her daughter “works hard for her money as the the city manager does” and both deserve a two percent raise. But she says he city council committee studying a minimum wage local law has ignored the ACCE’s complaints and concerns and says, “we can vote you in and we can vote you out,” to applause.

5.Cleveland, a Vocal Activist Was Charged With Assaulting a Cop at City Council Meeting

Wanda Cleveland at Sacremento City Council meeting in 2015 after being provoked attempts to strike an officer.

Two weeks after the October 13, 2015 Sacramento City Council Meeting, the ACCE was back in chambers and when one of the group, Christina Arechiga, declined to stop speaking after the citizen’s comments portion of the municipal meeting with a minimum wage proposal on its agenda had ended, and after being asked to stand down several times by Mayor Kevin Johnson, Arechiga was removed by police and arrested, the Sacramento Bee reported. Soon, as can be seen on video.

Cleveland can be seen being touched from behind by a police officer and then Cleveland turned and started to attack the officer with a closed fist.

Both Cleveland and Arechiga were arrested and charged, it was reported.

The police said that Johnson had warned Arechiga to stop talking repeatedly, without success. Her refusal seemed to prevent the meeting from moving forward, so officers moved in, the Bee reported.

“Last night, two individuals continued to be disruptive after several peaceful requests by council to comply,” Sacramento Police Officer Justin Brown said in a statement to the Sacramento Bee. “As a result, both subjects were safely removed from council chambers and arrested for disrupting a public meeting.”

ACCE issued to statement to the paper as well: “In an unnecessary and overly aggressive move to silence the crowd the police were ordered to arrest Arechiga and Cleveland who refused to be silenced.”

Two members of the City Council, who sided with the activists said the police action was an “overreaction” and “unreasonable.” 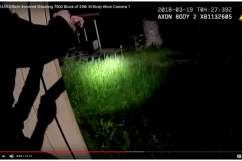