Dimitrios Pagourtzis is accused of being the school shooter at Santa Fe High School in Texas. What’s known about his family? The accused shooter, who also goes by the name Dimitri Pagourtzis, is the son of a Greek immigrant who owns a marine repair company and a mother who works at a medical center.

The Texas governor said in a news conference that it’s believed the 17-year-old used guns that his father, Antonios Pagourtzis, had purchased legally, a shotgun and a handgun. The father told The Wall Street Journal that his son was a “good boy” who was “mistreated at school.”

A picture was already starting to emerge of America’s latest accused high school shooter, a 17-year-old from Santa Fe, Texas who barged into an art room clad in a trenchcoat and Army boots. Ten people – one teacher and nine students – died in the horrific attack, according to authorities, who said that the suspect, who is still alive and is in custody, may have planted explosives in and around the school. The victims’ names have not yet been released. Ten others were injured. It’s but the latest school shooting to horrify America in a year that has already seen too many.

The accused shooter’s dad liked the Facebook page of Fox News and NRA spokeswoman Dana Loesch through his own page. The suspect’s mother shared a post that reads “Make America Great Again. Go to Church & Worship God” along with other religious oriented posts. The parents’ other posts do not appear to be focused on politics.

Dimitrios Pagourtzis’ mother’s name is Rose Maria Kosmetatos. His father’s name is Antonios Pagourtzis. They were married in 2000. There was an age gap between the two at the time; he was 45, and she was 30, according to online records.

The governor, Greg Abbott, said during the news conference that it’s believed the weapons came from the dad and added: “Neither of these weapons were owned or legally possessed by the shooter.”

It’s likely that some attention will focus on who knew what when (or should have known) in light of disturbing social media posts attributed to the suspect. While his parents’ Facebook pages are innocuous, an Instagram and Facebook page that appear to have belonged to the accused school shooter contained disturbing materials. According to his Facebook page, Pagourtzis was in the 11th grade at Santa Fe High School, which is located in Texas.

The accused school shooter allegedly shared photos of a “Born to Kill” T-shirt on his Facebook page before the shooting, although the page has been deleted. An Instagram page that may belong to him followed numerous gun-related accounts, including sickguns, gunspictures, Guns Fanatics, Guns Lovers and Guns Glory. Another photo posted by Pagourtzis on social media shows a duster jacket with icons that include Nazi symbols, and students have said he was often seen in a trenchcoat. He also played JV football.

Authorities say the suspect had a journal in which he wrote about suicide and his plans for the shooting. According to Fox News, the accused shooter was obsessed with violent videogames, including war simulation. 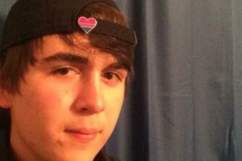 Antonios Pagourtzis is an immigrant from Greece, according to his Facebook page. “He worked at North American Marine, Inc.,” lives in Houston, Texas, and is from Magoulítsa, Kardhitsa, Greece, the Facebook page says. It’s filled with photos of boats. The father liked the pages for Fox News and Dana Loesch on Facebook.

Dana Loesch is the controversial, outspoken spokeswoman for the National Rifle Association. Most of the dad’s other likes are cities in Greece.

The father appears to own that marine company. Other photos on the dad’s Facebook page show him on a tractor and with family members. His cover photo is a Greek logo, and some people write in Greek on the father’s page.

One photo does appear to show the dad shooting bows and arrows with children. It’s not clear how the suspect obtained the guns he used in the shooting. The suspect’s parents have not commented on the massacre. According to their Facebook pages, the suspect appears to also have a sister.

3. His Mother Works for a Medical Center & There Might Be a Bomb at His Mom’s Trailer

Rosemarie K Pagourtzis is listed in a Texas Tribune salaries database as “Administrative Associate in Pediatric Endocrinology, a department of The University of Texas Medical Branch at Galveston.” She makes $42,201, and her race was listed as Hispanic/Latina in that database. She was hired in September 2013.

Click2Houston reported that “authorities were searching a home tied to the suspect.” Several law enforcement agencies were at a home on State Highway 6, about three miles away from the school. A Harris County deputy at the scene said, ‘there’s a bomb’ at the house,” according to the television station. Online records show Dimitrios Pagourtzis’ mom lives in a trailer on that property.

4. The Family Appears to Participate in Greek Dancing

The family appears to be involved in Greek dancing through an Orthodox church. The suspect’s mother shared a photo of Greek dancers on her Facebook page.

FacebookA post on the page of the accused shooter’s mother

The suspect’s mother mostly shared positive sayings on her Facebook page and made mentions to Greece. “Love fiercely because this all ends,” read one post she shared. She also shared positive phrases about Jesus Christ and being Christian. Rosa’s profile picture is a graphic about coffee.

5. The Family’s Facebook Pages Are Filled With Family Photos

Both the mother and father of the accused shooter have filled their social media pages with family pictures. However, the mother’s profile picture focused on coffee:

The profile picture of the suspect’s mother.

Here’s another family photo from the dad’s Facebook page:

A family photo on Antonios’ page

The suspect’s dad and sister