Princess Diana married Prince Charles on July 29, 1981. Diana wore an ivory silk taffeta gown when she walked down the aisle at St. Paul’s Cathedral. The gown featured antique lace and an impressive 25-foot train. It was complimented by a veil that was made using 153 yards of tulle.

The gown was designed by David and Elizabeth Emanuel, a former husband and wife design team. The then-couple was keeping one of the biggest secrets in the world. In fact, David Emanuel ripped up the sketch of the gown (after Diana and her mom approved it) to ensure that no one else saw it, according to E! News.

For the next three months, David and Elizabeth Emanuel found themselves burning the candle at both ends.

“Halfway through we realized, ‘We’re not going to finish this.’ There was a little bit of panic. Behind the scenes we’re thinking, ‘maybe we’ve bitten off too much…keep sewing!'” David recalled to E! News. “Copious amounts of tea was drunk, copious amounts of coffee was drunk, you name it—keep going! And finally we could see the end,” he added.

Both David and his then-wife were on-hand on Princess Diana’s wedding day to help her put on the gown, which was so huge that it barely fit inside the car that took her to the church. The dress ended up getting wrinkled, which panicked Elizabeth, but the creases were simply par for the course.

“I remember whispering to David: ‘Oh my God, it’s creased.’ I thought, ‘We’ve got to straighten out that dress.’ In the tiny carriage, it had crumpled far more than we’d anticipated. We’d done a rehearsal, but not with her father, Earl Spencer, in the car, too — and he was quite a large man. It was a hot day, there was so much volume in the net and she was nervous, so she kept grabbing hold of it in her hands. Fortunately, we knew the fabric would pull out — that’s why we were there. When she came out of that carriage, it was the most wonderful vision I’d ever seen. She looked like a butterfly emerging from her chrysalis, unfurling her wings and about to fly. It was so romantic. Oddly, the imperfections seemed to make her even more beautiful,” Elizabeth Emanuel told the Daily Mail in 2017.

Elizabeth Emanuel left her mark on the stunning gown. Not only did she attach a small 18-carat gold horseshoe trinket — perhaps for good luck — but she also left a safety pin attached to the dress. Neither of these things were visible to the public.

Princess Diana followed the “Something Borrowed” tradition. For “something old,” Diana’s dress’ antique lace checked the box. The Antique Carrickmacross lace previously belonged to Queen Mary. Something new was the gown itself. “Something blue” was sewn into the dress’ waistband — a small blue ribbon in the form of a bow. As far as “something borrowed,” Diana wore the Spencer family tiara, according to Good Housekeeping.

So, where is Princess Diana’s wedding dress now? Back in 2014, the wedding gown was given to Prince William and Prince Harry for safe keeping. According to Today, Diana had written about her gown in her will. She wanted her sons to keep the dress when Prince Harry turned 30.

Following Diana’s death, the gown was kept at the Spencer family’s Althorp estate in Northampton, England.

For the past few years, the gown has been on tour and it has been viewed by millions of people. 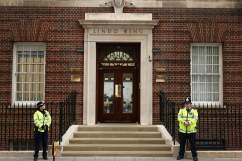