German photographer Gerda Taro is being celebrated with a Google Doodle on what would have been her 108th birthday.

As a photographer, and co-creator of the famed “Robert Capa” alias, Taro is regarded as the first female photojournalist to cover the front lines of a war. She is also the first female photographer to die as a result. Her work covering the Spanish Civil War is considered among the most iconic in history, and she was sought after by many international publications during her career.

Here’s what you need to know about Taro:

1. She Fled Germany After Promoting Anti-Nazi Propaganda In 1933

Taro was born Gerta Pohorylle on August 1, 1910. Due to the upper middle class status of her family, she was allowed a good education at a Swiss boarding school, discussions about art and politics, and elegant balls. According to UTATA, however, the German city in which they lived grew increasingly inhospitable for Jews, and by the early 1930s, Nazism had begun to spread.

During this time, Gerta became more political. She helped activists distribute anti-Nazi pamphlets, and was subsequently arrested. She spent a single night in a prison cell, where its said that she was only inmate wearing a dinner gown. By 1933, Adolf Hitler had been appointed Chancellor, and the Pohorylle family decided to leave Germany. Due to the delicate nature of their exit, however, they were forced to separate. Gerta’s parents moved to Palestine, her brothers to England, and she to Paris.

In Paris, Gerta met Hungarian photographer Endre Friedmann. She adopted the name Gerda Taro, which was inspired by Japanese artist Tarō Okamoto and Swedish actress Greta Garbo, and became Friedmann’s lover as well as his personal assistant. The couple worked at Alliance Photo as photograph editors.

2. She & Endre Friedmann Created the Alias ‘Robert Capa’ to Sell Their Photos

Taro and Friedmann honed their talents as news photographers during their time at Alliance Photo, and the former received her first photojournalist by 1936. Frustrated with the lack of pay, however, and keenly aware that their names were hindering them due to Europe’s growing intolerance of the Jewish people, Taro and Friedmann decided to invent an alias.

According to The Digital Journalist, they began selling photos as fictional American photographer Robert Capa. The surname of their alias was derived from Friedmann’s nickname as a teenager, “Cápa,” which means “Shark” in Hungarian. Although their alias was was quickly uncovered, their work became so respected that they continued to receive assignments. Friedmann decided to assume the name Robert Capa as his own, despite the fact that Taro had shot several photos under the same alias.

This has led to much confusion over the years, as Friedmann’s contributions have consistently overshadowed Taro’s, due to him adopting the alias. Further complicating matters was the fact that both of them shot using the same 35mm format, making it difficult to differentiate their work. By 1937, the duo had become releasing photos under the banner Capa & Taro, and Taro had begun submitting solo work to the French leftist press.

Another photojournalist of the period, Eva Besnyo, told The Guardian that Taro was the heart behind the Robert Capa operation. “Without Greta, Endré would not have made it,” she said. “She picked him up, gave him direction. He had never wanted an ordinary life, and so when things didn’t go well, he drank and gambled. He was in a bad way when they met, and maybe without her it would have been the end for him.”

3. The Photos She Took At a Morgue In Valencia Are Among Her Most Famous

A post shared by Abierto por deconstrucción (@abierto_por_deconstruccion) on Apr 14, 2018 at 12:28pm PDT

When the Spanish Civil War started on July 17, 1936, Taro and Capo were among the first photojournalists on the scene. They shot a great deal of the action side-by-side, and several of their images, including “The Fallen Soldier,” where a soldier was photographed at the moment of his death, were published around the world. Upon publication, the British magazine Picture Post declared Capa “the greatest war photographer in the world.”

The duo left Spain and then returned at the start of 1937. Capo decided to leave after only a month, but Taro remained, and went on to capture some of her most startling and influential work as a result. She visited a hospital and a morgue after the bombing of Valencia, and her intimate shots of the injured soldiers would go on to inspire the deep-contrast black and white aesthetic that photojournalists would use during World War II and the Vietnam War.

When asked who the dominant creative force was behind the Robert Capa alias, biographer Marc Aronson told Guernica Magazine that it seemed to be an equal partnership. “We’ve thought a lot about them as a couple who collaborated as pure equals, who, in effect, created each other,” he said. “Taro, probably literally, invented Robert Capa. And he taught her how to photograph without any sense of territory.”

4. She Was Vocal About Her Political Beliefs & How They Fueled Her Work

In her prime, Taro became associated with a group of anti-Fascist intellectuals living in Europe. Some of the most notable members of the group were authors Ernest Hemingway and George Orwell. Inspired by their political conviction, Taro began publishing her work in leftist magazines like Regards, Illustrated London News and Life.

When the Nationalist propaganda claimed that the region of Brunete was under its control, the Digital Journalist reports that Taro was the only photojournalist who fought her way to the location and discovered that the Republican forces had been removed. Her photos were the only testimony of the situation.

Marina Budhos, who co-wrote the book Eye of the World with Aronson, said that Taro was fully aware of the influence her work had. “They were very willing to let their photographs be used for propaganda purposes,” she said. “They would take images of, say, Madrid being bombed, and those would be used in fundraising campaigns… Capa and Taro knew their images would be used for a purpose besides the general newsmagazine.”

It was during this period that Taro and Capa’s romance cooled off. The Guardian claims that she began a relationship with Canadian journalist Ted Allan, who she’d met on the frontlines. According to Allan’s diaries, they spent “mornings, afternoons, and evenings together chasing stories” and were “constant companions.”

Taro was killed during a frontline retreat on July 25, 1937. According to the Digital Journalist, she and Allan were on the running board of a car when a tank smashed into the car and knocked them to the dirt. She died as a result of her injuries the next day. She was 26 years old. Due to the vague nature of her injuries, however, many scholars have speculated that there may have been foul play at work.

“The details of what happened that afternoon remain obscure, and the accepted version of events has been stitched together from several accounts, some reliable, others less so,” wrote Robin Stummer. He claims that Taro had personal links to the Socialist Workers’ Party of Germany, and that their connection landed her on the hit list of Joseph Stalin, and that the “accident” was no such thing. Others have speculated that Taro was actually run over by the tank rather than hit by it, but none of these theories have been confirmed.

Taro’s funeral was attended by thousands of soldiers and journalists, including Capa and Allan. The French Communist Party gave her a grand ceremony in Paris, and commissioned Swiss artist Alberto Giacometti to create a monument for her gravestone.

In 2018, a photograph was discovered of what appears to be Taro on her deathbed. According to The Guardian, the photo was published on Twitter by John Kiszely, a retired British lieutenant general, whose father, Dr. Janos Kiszely, worked alongside Taro. 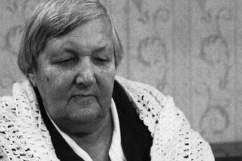