During the band’s performance of “4U,” he stopped with tears in his eyes and said, “This was my wife’s favorite song. I’m sorry.”

Davis lost his wife Deven on August 17, and although no cause of death has been publicly released, Davis did release a heartfelt statement a few days after, stating that Deven was plagued by mental illness and addiction for many years. In the statement, he said that she “had a serious mental illness and her addiction was a side effect.”

“I want California law to change to help people like me help others get the help they need. How can someone who is sick realize themselves that they need help? She wasn’t well enough to realize how sick she really was, and wasn’t able to get the help for herself that she really needed.”

According to Davis, Deven had battled drug addiction for 20 years and was in rehab six times. Jonathan noted her drug use was causing emotional harm to their kids, and had filed for divorce in October, 2016 citing “irreconcilable differences.” Sources also state that Davis had filed for a restraining order the day of her death, but, according to TMZ, it was unlikely that Deven even knew, as she was never served the paperwork.

PopCulture reports that Deven disappeared from a recovery facility shortly before her death. A press statement confirmed her passing on August 17, which read, “The Davis family is brokenhearted over the devastating loss of Deven Davis. We ask that you respect their privacy—and the privacy of those close to the family—and allow them the space to mourn in private. We thank you for your love, understanding and prayers of support during this difficult time.”

This was the first Korn show since Deven’s death. Davis ended the set in tears as well, embracing bandmate and longtime close friend James “Munky” Shaffer for a significant time. You can watch the emotional embrace below:

Deven and Davis were married in Hawaii a decade after the release of Korn’s first album. Deven leaves behind two children, Pirate Howsmon Davis, 13, and Zeppelin Howsmon Davis, 11. You can read more about her life here. 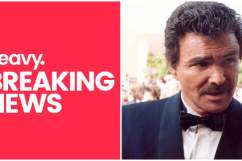 Burt Reynolds Cause of Death: How Did the Actor Die?