Kyrsten Sinema is the Democratic candidate for Senate, running against Martha McSally in Arizona for Jeff Flake’s vacated seat.

As an openly bisexual woman, Sinema might be making history on Tuesday by becoming the first openly bisexual senator in U.S. history. Regardless of whether Sinema or McSally wins, though, history will be made: Arizona will have its first female U.S. senator.

The race has been a dead lock for the past month. Here’s what you need to know about Sinema as a candidate:

I owe a large debt to my country. I got my shot and now it's my duty to help others get theirs. That’s why I’m announcing my campaign to represent Arizona in the United States Senate. Join our campaign today: https://t.co/8vJhyAJIbr https://t.co/gJufNOIsGX

Sinema made national headlines in November 2012 when she was elected the congressional representative for Arizona’s then-newly formed 9th Congressional District (created after the 2010 census results came in).

Sinema was only 36 years old when she took her congressional seat in January 2013. She was also the first openly bisexual person elected to Congress (though when she took her seat in 2013, there were already six openly gay or lesbian Congresspeople as well). GOP political analyst Kris Meyes had described Arizona’s 9th district as “representative of a changing Arizona,” and the district’s choice of Sinema as their first representative seemed to further cement that reputation.

Sinema has never been married (and in December 2015, she topped The Thrillist’s list of “The Sexiest Singles of the US Congress”).

Before going to Washington, Sinema spent eight years serving in the Arizona state legislature and Senate.

2. She Spent Two Years Homeless as a Child

We believe that every Arizonan should get his or her shot at the American Dream. Join us if you agree: https://t.co/8vJhyAJIbr pic.twitter.com/QUypH3GiVY

Sinema’s official biography on House.gov describes her as someone who “knows firsthand the struggles families face. As someone whose family at times faced serious poverty growing up, she knows what it means to struggle just to meet the most basic needs. For three years, her family lived in an old gas station – a rectangle building with no electricity or running water.”

The Washington Post went into more detail in a January 2013 lifestyle piece summarizing Sinema’s career as “A success story like nobody else’s”: Sinema was born in Tucson and moved to Florida with her mother after her parents went through what Sinema called “a tough divorce.”

In Florida, Sinema’s mother married the vice-principal of her daughter’s elementary school. But he eventually lost his job and the family ran out of money, so when Sinema was in third grade, the family started squatting in an abandoned gas station on the outskirts of a Florida Panhandle town of Defuniak Springs. The family took showers in the trailer of an uncle “down the road,” and young Kyrsten’s clothes were hand-me-downs from a girl who attended the same Mormon church as her family.

Within a couple of years the family’s fortunes improved enough to leave the gas station and move into a small house. In school, Sinema worked hard enough to get her high school diploma at age 16, and a B.A. from Brigham Young University (which she attended on full scholarship) at 18.

3. She was a Social Worker Before Going Into Politics

Heard from Tucson business leaders about the need for bipartisan tax reform. Only bipartisan solutions last the test of time. pic.twitter.com/pjnSXqSPlr

Upon graduating from college, Sinema started working as a social worker, a job she held from 1995 through 2002. (She also picked up a Masters of Social Work degree in 1999.) The poverty she experienced as a child and the poverty she saw in her social-work clients both strongly influence her work; in 2013 she told the Washington Post that poverty has a more of a driving influence on her than any other aspects of her character or experience. “I don’t think religion or my [sexual] orientation shaped my world view,” she said. “They’re parts of who I am, but they’re not driving the force.”

Her official biography on the congressional website describes her social work as follows: “Sinema became a social worker helping struggling families. She soon realized that the problems they came to her with – poverty, homelessness, job loss, abuse – were common to so many families, and that solving these problems meant thinking bigger than one family at a time. It required fighting for real change to rebuild an America that works for ALL Americans.”

A May 2013 profile in Elle magazine goes into more detail; as a social worker, Sinema was assigned to a low-income elementary school in Phoenix, where she converted a former locker room into a “family resource center,” complete with a clothing bank set up in the showers. In 2000, Arizona state lawmakers threatened to gut the school district’s budget, so Sinema’s fellow social workers voted to send her to the state capitol to fight the budget cuts.

When she first entered the capitol building, Sinema said, “I was scared I wasn’t knowledgeable enough.” That fear vanished as soon as she started talking to actual lawmakers: “I realized I was way overeducated. I had the skill level. And I realized there weren’t people like me inside the building. At that moment, I decided to run for office.”

For all its emphasis on poverty and its problems, Sinema’s career includes a consistent focus on same-sex rights, too. In 2006, she led a successful state-level voter effort to defeat Arizona’s 1996-era ban on gay marriage. OnTheIssues maintains a page focused on Sinema’s civil rights record; in 2006 she voted to include sexual orientation and gender identity in Arizona’s anti-discrimination laws. In 2012, three years before the Supreme Court’s Obergefell decision made gay marriage legal throughout the country, she expressed support for same-sex marriage, and in 2013, after going to Congress, she co-sponsored the Student Non-Discrimination Act with would enforce against anti-gay discrimination in public schools.

4. She Once Described Herself as a “Prada Socialist”

Loved seeing old and new friends at our happy hour yesterday! So grateful to have you on our team. pic.twitter.com/qakCkNBg8U

Political observers say Sinema today is much more of a moderate centrist than she was earlier in her political career. In November 2012, after Arizona’s 9th District congressional election but before the disputed vote count confirmed Sinema did indeed win, the Arizona Capitol Times published an analysis headlined “Sinema evolves from firebrand to pragmatist,” which started out like this:

For years, the consensus around the [Arizona] Capitol was that Kyrsten Sinema couldn’t win a congressional race.

She’d made too many inflammatory statements and was viewed as too much of a left-winger. Even when she entered the race for Arizona’s 9th Congressional District, many believed her past would come back to haunt her if she made it to the general election. … Sinema entered Arizona politics as a radical. She worked on Ralph Nader’s 2000 presidential campaign, protested against the invasion of Afghanistan and ran unsuccessfully for the Legislature as an independent in 2002, when the Arizona Democratic Party dubbed her “too extreme” for central Phoenix. In 2004, she was elected as a Democrat, and quickly earned a reputation as a standard-bearer for the party’s progressive wing in the Legislature.

But when Sinema toned things down and started reaching across the aisle, things started to change. She began working with Republicans on bipartisan legislation….

During a magazine interview in 2006, Sinema jokingly referred to herself as a “Prada socialist” (when the Washington Post mentioned this is 2013, it included the detail that Sinema owned more than 100 pairs of shoes). Her political opponents still bring up her relatively radical past. On Sept. 28, when Sinema formally announced her Senate run, Phoenix station Fox 10 reported the news and noted that @FlakeforSenate, the verified Twitter account for Jeff Flake’s then-active Senate re-election campaign responded with several tweets critical of Sinema, including one since-deleted tweet saying “@KrystenSinema is a radical progressive who is out-of-touch with Arizona #AZSen.”

When AZCentral reported Sinema’s senatorial run, it quoted a statement from National Republican Senatorial Committee Communications Director Katie Martin saying “Kyrsten Sinema has more in common with the failed, radical leadership of Nancy Pelosi than she does with Arizonan families, and her track record of voting in lockstep with Washington Democrats will haunt her uphill campaign for Senate.”

5. She Grew up Mormon but is no Longer With the LDS Church

Sinema was raised in the Mormon church. During those bleak childhood years when she lived in an abandoned gas station, her family did get occasional help from other members of their congregation (including the clothes Sinema wore), plus frequent visits to a Mormon food pantry. She later attended Brigham Young University on a full scholarship.

When looking back on her record of personal and political success stories, Sinema later said “I benefited from the help of church and family and government my whole life.”

Her parents still follow the church’s teachings (in 2013, when the Washington Post ran its lifestyle story about Arizona’s then-new Congresswoman, Sinema’s parents were on a Mormon missionary trip in the Philippines), but Sinema’s religious views changed after she left college and entered young adulthood. As she said to the Washington Post “I have great respect for the LDS church — their commitment to family and taking care of each other …. I just don’t believe the tenets of the faith that they believe.”

While she has never criticized the religious traditions of her childhood, she is opposed to faith groups’ intervention in politics; during a gay-marriage battle in 2008, Sinema said “I don’t think Arizonans are interested in having the Mormon religion dictate public policy to them.” 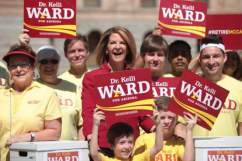