George W. Bush is a millionaire many times over. With the former president back in the public eye at remembrances for his father, many are wondering what he’s done since leaving the presidency and how much wealth he’s accumulated.

George W. Bush is not the wealthiest ex-president, but he’s a rich man. Bush served as the nation’s 43rd president, earning two terms in office and presiding over the country during the traumas of Sept. 11. With the death of his father, George H.W. Bush, on November 30, 2018, George W. Bush could be in line to inherit more. What is George W. Bush’s net worth?

The net worth of George W. Bush and his wife, Laura Bush, is generally estimated to be around $35 million.

1. Some of Bush’s Wealth Derives from the Texas Rangers Baseball Team

Before he was president and before he was governor of Texas, George W. Bush was wealthy enough to partially own a Major League Baseball team, the Texas Rangers. Some of his wealth still derives from that ownership stake.

Bush “became co-owner of the Texas Rangers baseball team, making some pivotal trades. By 1989, he sold his share of the team for 17 times his initial investment,” reported Bankrate.

As is common in Texas, Bush struck it rich in the oil fields. “In 1977, he created Arbusto Energy Inc., a Texas-based oil company, renaming it Bush Exploration in 1982. The company later merged with Spectrum 7 Energy Corp.,” reports Bankrate.

Bush’s father, former President George H.W. Bush, had a net worth of around $23 million, although much of it is tied up in property.

Being an ex-president can be very lucrative. For Bush, speaking fees are a way to bring in money. Bush earns $150,000 per speech, according to The Richest.

According to the Richest, Bush had earned $15 million in speaking fees through 2013 alone.

Mark Wilson/Getty ImagesU.S. President George W. Bush sits at his desk in the Oval Office after addressing the nation about the terrorist attacks on New York and Washington, D.C.

George W. Bush’s net worth is also rounded out by pensions from his time in public service. In addition to serving two terms as U.S. president, Bush has served as governor of Texas.

In 2012, Bush earned $1.3 million in pension benefits. Former presidents get about $200,000 a year in pension payouts, but they have other perks, such as office space, travel funds, and Secret Service protection, according to MSNBC. 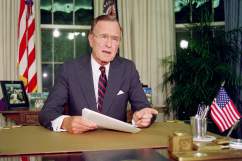 5. Bush Owns a Ranch & Other Property

In 2008, George W. Bush’s net worth was already approaching $10 million. Part of his wealth at that time was a ranch in McLean, Texas, which was worth $3 million.

You can see a list of his assets at that time here. In addition to real estate, they included government bonds, money market accounts, mining interests, and IRA accounts.