A 75-foot dive boat on a three-day trip to the Channel Islands off the California coast with 34 people on board caught fire and Monday in the early morning hours. The passengers were trapped in a lower deck. The captain and four crew escaped. The vessel’s captain is Jerry Boylan.

The trip was a $665 Labor Day weekend dive trip to the Channel Islands on board vessel “Conception.”

By late Tuesday morning, the remains of 25 were found. Some of the victims have been identified by friends and family.

During a press conference Tuesday with Santa Barbara County Sheriff Bill Brown and USCG Capt. Monica Rochester detailed what is known about the incident being investigated by the National Transportation Safety Board, the Coast Guard and county authorities.

I use to scuba dive from this boat (Conception) a lot, they do not lock anything at night and you're free to move about whenever. The only way to get up on deck is through the galley. Something happened in the galley. #SantaCruzIsland pic.twitter.com/9k6U3DJzYv

Rescue efforts “have ceased” as there’s no chance of any survivors, Rochester said.

When asked about smoke detectors, she said they are required on board. The vessel had an inspection last month and was “in full compliance.” But when asked that given authorities say the 39 people in the lower deck were likely asleep when the fire began, would smoke detectors not have gone off in that lower cabin, Rochester said that is part of the investigation.

Santa Barbara detectives, the NTSB and USCG investigators are taking formal statements from the five crew members who survived by jumping off the boat. Authorities confirmed that the captain was one of those to have jumped off the boat and was rescued by “good Samaritan” vessel ‘Grape Escape.’

The boat, based in Santa Barbara and is owned by Glen Fritzler of Truth Aquatics Inc., was fully engulfed in flames when crews arrived.

More than 12 hours after the fire was first reported, Aquatics posted this on its Facebook page which essentially details what agencies are involved. 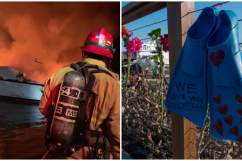 The vessel was reported as being on fire. The a group of crew members has been rescued (one with minor injuries) and efforts continue to evacuate the remaining passengers. https://t.co/ojaSdUTHXd

At 3:14 a.m., the US Coast Guard Sector Los Angeles can be head on the Ventura County Marine 16 scanner channel reporting a mayday call for a vessel in distress.

Through static, a US Coast Guard dispatcher can be heard speaking to the captain who says the vessel is on fire. The captain says he has 33 on board. The dispatcher then confirms that there are 34 in total, including one crew member trapped below deck. He urgently asks the captain if he is on the boat. The Coast Guard asks the captain if he can get back on board the boat and unlock the hatch door so people can escape:”They cannot get off …are they locked inside the boat? Can you get back on board and unlock the doors so they can get off? Was that all the crew that jumped off? Is this the captain? “Roger.” There’s no escape hatch,” the dispatcher asks. He asks if the captain has fire-fighting equipment. He apparently does not.

This was the vessel that saved 5 crew members from the burning Conception dive boat. Those onboard now speaking with USCG. pic.twitter.com/XuHf3s91gs

The captain and four other crew were rescued by a boat called the ‘Grape Escape.’

At an initial briefing, while Ventura County fire said it was now a “recovery” operation, Rochester said they were combing the shore looking for survivors. The fire occurred just 20 yards from shore at Platts Harbor on the north side of Santa Cruz Island.

A Night Watchman Was Supposed to be on Duty, but the Passengers Below Deck Were Likely Asleep When the Fire Started

Authorities also said that the vessel is supposed to crew member that acts as a night-watchman. That too is part of the investigation.

Authorities said when the fire broke out, all 39 below deck were likely asleep. When asked if they were asleep when they “perished,” Brown said that would be determined as part of the investigation.

Brown said there has as of yet only been visual examinations of the bodies recovered so far. He said that while the Los Angeles Coroner’ Office sent mobile coolers and additional personnel, no autopsies have been performed so cause and manner of death have not been identified.

Brown said that DNA testing is being used to identify victims because it was an “extremely hot fire” and there was “extreme thermal damage” to the bodies of the victims.

When asked if anyone below deck made it out Brown said there was no indication that was the case.

The ship has three decks. The lowest is the sleeping deck, the second deck is the salon and galley are and main deck for passengers and the top deck is known as the bridge and that’s for the crew.

Brown said the 39 below deck “trapped.”

“That does appear to be exactly what happened,” he said. The “stairwell and escape hatch were blocked by fire.”

Rochester said the takeaway for other charters is to make sure that “everybody understands what the emergency escape routes are prior to departure,” she said, adding “I would suggest” adequate preparation, training, drills and fire exercises be carried out.

The vessel is equipped with a “fixed firefighting system in engine room” and portable fire extinguishers at both exit and entry points, “on bridge and on main deck” and as of the last inspection, “all apparatus was accounted for,” Rochester said. Lower deck fire extinguishers were not mentioned or asked about at a press briefing in Santa Barbara Tuesday.

Authorities said there are 14 people still missing but at least four and possibly six bodies were seen in the wreckage.

Read the full statement from the Coast Guard here.

#CoastInc: @VCFD responded to boat fire off the north side of Santa Cruz Island at approximately 3:28am. @USCG helping support rescue operations for people aboard a dive boat. #ChannelIslands @USCGLosAngeles @CountyVentura @SBCOUNTYFIRE pic.twitter.com/DwoPGfBjtA

Twitter emergency scanner accounts from Los Angeles and Ventura County are reporting that 34 are dead and a “coastline search now underway seemingly as a contingency but units are reporting the info from the boat crew was definitive.”

The first reports were that a “fully involved” fire aboard the vessel in Platts Harbor in Santa Cruz Island off the coast of Ventura and Santa Barbara counties. “…reportedly 30+ souls on board, rescues are in progress. Numerous resources on scene & responding including private boats, USCG copters, FD boats.”

Reports said that five “crew escaped per the Captain of the boat, 1 being treated for a broken leg. The remainder of the persons on board are unaccounted for. Being treated as a crime scene, FF’s knocking down fire while trying to not sink the remains of the boat.”

Tuesday, it was explained that there were two Mayday calls. The first was from aboard the Conception, Santa Barbara Sheriff Bill Brown said, where the captain says he can’t breathe. The second call came from the Grape Escape once the crew had been rescued. It was explained that after an interview with the watchstander and dispatcher, Brown said there was a lot of activity that happened, a lot of adrenaline.” He said the radio communications person was trying to ask for information to determine if the people below deck were trapped. Brown said they were. But said the hatch was not locked but they were nonetheless trapped by the fire.

The Grape Escape vessel captain said he heard explosions; Brown said these were likely from propane tanks and scuba gear while the fire was underway. Whether or not an explosion precipitated the fire is also part of the investigation, Brown said.

#SantaCruzIsland: The vessel was reported to be named "Conception". This is a 75 foot diving vessel owned by Truth Aquatics out of Santa Barbara. According to their website, the vessel was on a 3 day dive to the Northern Channel Islands. https://t.co/e70cLpCMPv pic.twitter.com/eyGdX6pDiL

According to its website, the vessel Conception holds “46 people maximum, 13 double bunks, 20 single bunks.” The craft holds 1600 gallons of fuel. It has rescue rafts and jackets for 110 passengers.

It says it has a 16-foot chase boat also known as a shadow boat. It’s not clear if that craft was near the main dive yacht.

The Dive Charter Company, Truth Aquatics, Its Staff & Vessel ‘Conception’ Are Praised by Many on Social Media

People who have been on the boat posted to social media their shock.

“I have been on dive trips on this boat many times and cannot imagine how something like this could happen.”

According to its website, the captain of the Conception is Jerry Boylan. It’s not been confirmed that Boylan was operating the craft at the time of the fire and sinking. Some reports suggest he survived the deadly incident at sea.

Truth Aquatics says Boylan has been at sea his whole life. His father was a US Coast Guard officer. He began diving at age 5. He’s been piloting dive boats at Truth Aquatics since 1985. He has “captained all of the Truth Aquatics liveaboard vessels as well as other boats in the sport diving and commercial marine industries” and is “in command of the Conception and enjoys showing others the beauty of the Santa Barbara Channel Islands.”

This is video of a 2018 dive trip aboard Truth Aquatics vessels.

Loading more stories
wpDiscuz
0
0
Would love your thoughts, please comment.x
()
x
| Reply
'Conception,' a 75-foot dive boat on a three-day trip to the Channel Islands off the California coast caught fire Monday. The captain and crew escaped, but 34 trapped below deck died.