It is no surprise that Seahawks quarterback Russell Wilson was asked about his relationship with Earl Thomas leading up to the Baltimore and Seattle matchup in Week 7. Wilson revealed he still frequently communicates with Thomas and the two families remain close even though the Pro Bowl safety is wearing a different jersey.

“Earl and I are actually really close,” Wilson noted at his weekly press conference. “We actually text quite a bit and communicate even during the season sometimes. You know, I think for Earl and I, we have shared a lot of similarities just in terms of his passion for the game. He loves the game and I think for us, my family and his, we’ve shared a lot of cool moments together. Our kids spent a lot of time together. Me and Earl, his wife and Ciara, so it’s been really cool just getting to know him obviously outside of football. Which is always amazing, we’ve always shared a lot of moments. I remember Ciara and I went to his wedding, how cool that was. How much fun that was. We’ve shared a lot of cool moments together. I love Earl. I love his family too, his kids and everybody else. It’s been cool just to get to know his family, his mom, his dad and everyone else, too.”

As for Thomas, the former Seahawks safety noted it is “business as usual” as he prepares to face his former team.

“Nothing has hit me yet,” Thomas explained to The Seattle Times. “I’m just trying to get the game plan down, just taking it one day at a time, trying to get my body right for the game. But no emotions yet. Nothing has really hit me yet.”

Wilson could not have been more complimentary of his former teammate leading up to their big matchup. Wilson emphasized that he believed Thomas is one of the best safeties to have ever played in the NFL along with Ed Reed, Ronnie Lott and Troy Polamalu.

“I hate having to play Earl, because we spent so much time together,” Wilson said during his Week 7 presser. “You think about all the fun moments together, just everything else. It’s been cool. All the games we were able to find a way to win and all the amazing plays he’s made. He’s as good as it gets. When you think about safeties, to be honest with you, he is one of the top one, two or three safeties to ever play the game, in my opinion. You know, you think about the Polamalus, you think about Ed Reed, you think about Earl, you think about Lott too, he’s an amazing player. There’s been some great players and he is one of those. I love Earl as a person. I love him as a player. I loved him as a teammate. Facing him every day for seven years, it was always a tough challenge every day in practice. He was amazing just how fast he was [a] sideline to sideline kind of guy. Physical, he brought it every day.”

The Seahawks Are a 3-Point Favorite Over the Ravens

Vegas expects a close contest as Thomas and the Ravens come to town. The Seahawks are a three-point favorite over the Ravens and the point total is set at 48.5, per OddsShark. The Seahawks-Ravens is one of the most exciting Week 7 matchups with Wilson and Lamar Jackson squaring off at CenturyLink Field.

It will be interesting to see if Thomas’ familiarity with Wilson and the Seahawks’ offense will give the Ravens any advantage. Seattle’s defense gets a big boost with Jarran Reed returning to the field on Sunday after serving a six-game suspension. 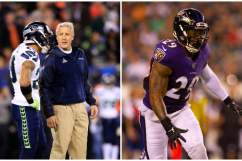