Iranians tear up a U.S. flag during a demonstration in Tehran on January 3, 2020 following the killing of Iranian Revolutionary Guards Major General Qasem Soleimani in a U.S. strike on his convoy at Baghdad international airport. Photo by ATTA KENARE/AFP via Getty Images.

The Department of Homeland Security issued a National Terrorism Advisory System bulletin on Jan. 4 after a U.S.-led airstrike in Iraq killed Qasem Soleimani, the head of the Iranian Revolutionary Guard Corps’ Quds Force.

“At this time there is no specific, credible threat against the homeland. The department issued this bulletin to inform, share protective measures, and reassure the American public, state and local governments, and private sector partners that the Department of Homeland Security is actively monitoring and preparing for any specific, credible threat, should one arise” Acting Homeland Security Secretary Chad Wolf said in a statement. “The department is operating with an enhanced posture and various operational components are taking protective measures where prudent and necessary. We have been in constant communication with Congress and interagency partners. The American people should feel assured the entire department is working for them to keep them safe.”

In 2011, the Department of Homeland Security replaced its color-coded alerts with the National Terrorism Advisory System designation of bulletins, elevated alerts and imminent alerts.

While the Department of Homeland Security said there is no immediate credible threat from Iran, “previous homeland-based plots have included, among other things, scouting and planning against infrastructure targets and cyber enabled attacks against a range of U.S.-based targets.” The department is urging Americans to protect themselves from a cyber attack.

“Iran maintains a robust cyber program and can execute cyber attacks against the United States. Iran is capable, at a minimum, of carrying out attacks with temporary disruptive effects against critical infrastructure in the United States,” the bulletin said. It also warns against “homegrown violent extremists” who “could capitalize on the heightened tensions to launch individual attacks.”

The Homeland Security Bulletin Was Issued After the U.S. Military Conducted an Airstrike in Iraq That Killed Qasem Soleimani

Wikimedia CommonsQasem Soleimani, the head of the Islamic Revolutionary Guard Corps-Quds Force, a U.S.-designated Foreign Terrorist Organization, was killed by a U.S. airstrike in Iraq.

Pentagon officials confirmed the death of Qasem Soleimani, the head of the Islamic Revolutionary Guard Corps’ Quds Force, on Jan. 2.

“At the direction of the President, the U.S. military has taken decisive defensive action to protect U.S. personnel abroad by killing Qasem Soleimani, the head of the Islamic Revolutionary Guard Corps-Quds Force, a U.S.-designated Foreign Terrorist Organization,” the Defense Department said in a statement on Jan. 2.

“General Soleimani was actively developing plans to attack American diplomats and service members in Iraq and throughout the region. General Soleimani and his Quds Force were responsible for the deaths of hundreds of American and coalition service members and the wounding of thousands more. He had orchestrated attacks on coalition bases in Iraq over the last several months – including the attack on December 27th – culminating in the death and wounding of additional American and Iraqi personnel. General Soleimani also approved the attacks on the U.S. Embassy in Baghdad that took place this week,” the statement said. “This strike was aimed at deterring future Iranian attack plans. The United States will continue to take all necessary action to protect our people and our interests wherever they are around the world.” 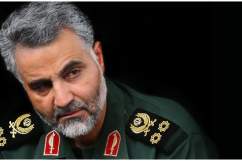 A senior State Department official told reporters that Soleimani “is the architect of Iran’s major terrorist attacks over the last 20 years. He’s killed 608 Americans in Iraq alone. And so when we start seeing extensive and very solid intelligence that he is plotting imminent attacks against the United States, the president, as Commander-in-Chief, has a duty to take decisive action.”

….targeted 52 Iranian sites (representing the 52 American hostages taken by Iran many years ago), some at a very high level & important to Iran & the Iranian culture, and those targets, and Iran itself, WILL BE HIT VERY FAST AND VERY HARD. The USA wants no more threats!

In a series of tweets on Jan. 4, President Donald Trump warned Iran that there would be dire consequences if it retaliated against the United States for the killing of Qasem Soleimani.

"Iran is talking very boldly about targeting certain USA assets as revenge for our ridding the world of their terrorist leader who had just killed an American, & badly wounded many others, not to mention all of the people he had killed over his lifetime, including recently hundreds of Iranian protesters," Trump wrote on Twitter. "He was already attacking our Embassy, and preparing for additional hits in other locations. Iran has been nothing but problems for many years. Let this serve as a WARNING that if Iran strikes any Americans, or American assets, we have targeted 52 Iranian sites (representing the 52 American hostages taken by Iran many years ago), some at a very high level & important to Iran & the Iranian culture, and those targets, and Iran itself, WILL BE HIT VERY FAST AND VERY HARD. The USA wants no more threats!"

A statement from President @realDonaldTrump: pic.twitter.com/Jfy4GCLdif 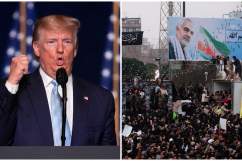 .@SecPompeo: It’s very clear the world’s a safer place. Qassem Soleimani no longer walks the planet. President @realDonaldTrump made the right decision to stop Soleimani from the terror campaign that he’d been engaged in against America and prevent the future plans that he had. pic.twitter.com/FXkzLPS9ge

The U.S. Embassy in Iraq was shut down on Dec. 31, 2019 after Iranian-backed protestors stormed the compound in Baghdad. The State Department issued a “Level 4: Do Not Travel” advisory for Americans traveling to Iraq, where thousands of U.S. troops are still deployed despite an official end to the Iraq War in 2011 under the Obama Administration.

The State Department warned that Americans in Iraq are in danger due to “terrorism, kidnapping, and armed conflict.”

“U.S. citizens in Iraq are at high risk for violence and kidnapping. Numerous terrorist and insurgent groups are active in Iraq and regularly attack both Iraqi security forces and civilians. Anti-U.S. sectarian militias may also threaten U.S. citizens and Western companies throughout Iraq. Attacks by improvised explosive devices (IEDs) occur in many areas of the country, including Baghdad,” the advisory said.

Secretary of State Mike Pompeo told NBC’s “Meet the Press” on Sunday that America was safer now that Qasem Soleimani had been killed.

QUESTION: Can you confidently say America is safer today?

QUESTION: How do you square that statement with the fact that we’re bringing – you’re advising American citizens essentially to leave the region if – particularly Iraq. We have the Homeland Security Department bracing Americans for cyber attacks, saying that we know the Iranians have been through our infrastructure, it is likely to happen and there won’t be a warning from it. It doesn’t sound like we’re safer today after this.

QUESTION: Then why did we put out that warning after the Soleimani – I mean, we do expect retaliations against American citizens now, correct?

SECRETARY POMPEO: Chuck, you’re concentrating on the second and the moment. President Trump is focused deeply on keeping Americans safe over the long haul. Preserving and protecting and defending America is the mission that we have. It may be that there’s a little noise here in the interim and that the Iranians make the choice to respond. I hope that they don’t. President Trump has made clear what we will do in response if they do, that our response will be decisive and vigorous, just as it has been so far.

But we’re going to take all actions necessary, not only in Iraq but throughout the region, to protect Americans, American citizens as well as my diplomats and servicemembers who are serving overseas. We’re always going to do the right thing to protect America, and I am confident that the decision we make – made to take down this terrorist, this designated terrorist who had inflicted so much harm over such an extended period, was the right course of action to reduce risk to America.

Iraq's parliament has passed a resolution calling for all U.S. and other foreign troops to leave the country amid a growing backlash against the U.S. killing of Iran's Qaseem Soleimani https://t.co/bByOgJ88zn pic.twitter.com/XEQKd6wTDn

In 2011, the Terrorism Alert System Was Changed From a Color-Coded System That Was Created After the Sept. 11, 2001 Terrorist Attacks

In 2011, the department scrapped the color-coded system. "Because of the trust we have in Americans to share in our collective security, today I announce the end of the old system of color-coded alerts," then-Homeland Security Secretary Janet Napolitano said at the time. “In its place, we will implement a new system that is built on a clear and simple premise: When a threat develops that could impact you – the public – we will tell you. We will provide whatever information we can so you know how to protect yourselves, your families, and your communities.”

“Under the new, two-tiered system, DHS will coordinate with other Federal entities to issue formal, detailed alerts regarding information about a specific or credible terrorist threat. These alerts will include a clear statement that there is an “imminent threat” or “elevated threat.” The alerts also will provide a concise summary of the potential threat, information about actions being taken to ensure public safety, and recommended steps that individuals and communities can take,” she said.

Loading more stories
wpDiscuz
0
0
Would love your thoughts, please comment.x
()
x
| Reply
The Department of Homeland Security issued a National Terrorism Advisory System bulletin on Jan. 4 after a U.S.-led airstrike in Iraq killed Qasem Soleimani, the head of the Iranian Revolutionary Guard Corps-Quds Force. Here's what you need to know.