Facebook Christian Cooper posted a video of a white woman, Amy Cooper, calling police on him after he asked her to leash her dog in Central Park.

A video of a white woman calling the police on a black man who was bird watching in the Ramble at New York’s Central Park after he asked her to leash her dog has gone viral online and is sparking outrage. The video, posted to Facebook on Monday, May 25, by Christian Cooper, shows the woman telling him she is going to call the cops and claim that he was threatening and trying to attack her and her dog. The video does not show Cooper threatening the woman and does show him telling her to stay away from him and to call the police if she wants to.

Christian Cooper, 57, said on Facebook the incident happened at the famed New York City park on Memorial Day morning as he was birding, as he often does. Cooper, a senior biomedical editor at Health Science Communications, said he told the woman dogs have to be on a leash in the Ramble. He said he began recording when she refused. The woman has since been identified as Amy Cooper, an investment banker. Christian Cooper and Amy Cooper are not related.

The video also shows Amy Cooper’s dog appearing to choke and struggle as the woman talks to police and moves around while on the phone. Heavy has reached out to Amy Cooper for comment. Heavy has also reached out to the NYPD and to Christian Cooper for more information. The video was also shared by Christian Cooper’s sister, science fiction and horror writer Melody Cooper, on Twitter, and it has been viewed more than 5 million times as of Monday evening.

You can watch the video and learn more about the incident below:

The Video Shows Amy Cooper Telling Christian Cooper ‘I’m Going to Tell Them There’s an African American Man Threatening My Life’ as He Stands Calmly in Front of Her, Encouraging Her to Call the Cops

Christian Cooper wrote in his Facebook post, “Central Park this morning: This woman’s dog is tearing through the plantings in the Ramble.” He included the conversation he said he had with her before the video began:

ME: Ma’am, dogs in the Ramble have to be on the leash at all times. The sign is right there.
HER: The dog runs are closed. He needs his exercise.
ME: All you have to do is take him to the other side of the drive, outside the Ramble, and you can let him run off leash all you want.
HER: It’s too dangerous.
ME: Look, if you’re going to do what you want, I’m going to do what I want, but you’re not going to like it.
HER: What’s that?
ME (to the dog): Come here, puppy!
HER: He won’t come to you.
ME: We’ll see about that…

Christian Cooper wrote, “I pull out the dog treats I carry for just for such intransigence. I didn’t even get a chance to toss any treats to the pooch before Karen scrambled to grab the dog.” He said she then yelled at him, “don’t you touch my dog.” Cooper said, “That’s when I started video recording with my iPhone, and when her inner Karen fully emerged and took a dark turn…”

Oh, when Karens take a walk with their dogs off leash in the famous Bramble in NY’s Central Park, where it is clearly posted on signs that dogs MUST be leashed at all times, and someone like my brother (an avid birder) politely asks her to put her dog on the leash. pic.twitter.com/3YnzuATsDm

Amy Cooper then backs up and lowers her face mask as she calls 911. “I’m in the Ramble and there’s an African American man in a bicycle helmet. He’s recording me and threatening me and my dog,” she can be heard saying. As she is speaking to the dispatcher, her dog starts pulling at his collar and trying to get free, appearing to struggle to breathe as Amy Cooper focuses on the call. She repeats, “There’s an African American man. I’m in Central Park, he is recording me and threatening myself and my dog.” Her dog then tumbles to the ground and yelps before panting heavily.

Amy Cooper wraps up the 911 call by yelling, “I’m being threatened by a man in the Ramble. Please send cops immediately. I’m in Central Park in the Ramble, I don’t know.” The video ends with her attaching the leash to her dog’s collar and Christian Cooper saying to the woman, “thank you.” 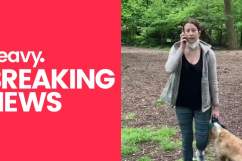 Police Did Respond to the Scene for a ‘Possible Assault,’ but Both People Were Gone, the NYPD Says

According to TMZ, which dubbed Amy Cooper, “Central Park Karen,” NYPD sources said officers did respond to Central Park about 8 a.m. Monday in connection to the call, but both Amy Cooper and Christian Cooper were gone when they arrived. The police sources told TMZ the officers were dispatched to a “possible assault.” No one was arrested and no tickets or warnings were issued because no one was there, TMZ reports.

ABC 7 New York’s Morena Basteiro tweeted a statement from the NYPD, “Call came in for a dispute, inside of the Central Park’s Ramble, around 8 a.m. this morning. Officers arrived and neither party was on scene. Thus, no report was filed and no arrests were made. No one has come forward to police since.”

Christian Cooper wrote on Facebook, “Once she put the dog on the leash, I birded my way out of the park as normal (I was done for the day and on my way out when I encountered Karen).” He added, “I’m fine… At this point, I’m getting used to this. Though the full-on racist slant was new.”

Christian Cooper also wrote, “imagine the police responded at some point, but once she put her dog on the leash, I went back to birding (which I was wrapping up and heading out anyway). We’ll see if there’s any blowback the next time I’m in the park, though I doubt it. If there is, I’ve got the video. … Also hopefully the police presence in the Ramble will increase (there is zero right now), and that will put further pressure on the irresponsible dog owners.”

Christian Cooper is a Harvard University graduate who worked at Marvel Comics from 1990 to 1999 as an associate editor, editing “Blade: The Vampire Hunter” and, briefly, “The Punisher,” and creating and writing “Darkhold: Pages from the Book of Sins” and “Star Trek: Starfleet Academy,” according to his LinkedIn profile.

Cooper’s father, Francis Hedgeman Cooper, was a longtime science teacher on Long Island and civil rights and community activist in New York who died in 2019, according to Newsday. He led the organization Congress of Racial Equality on Long Island in the 1960s and pushed for equality until the end of his life.

Cooper said after his father’s death, “He had an inability to sit still when he perceived something was wrong. He passed that on to his kids as well — you’re not a Cooper until you’ve been arrested at a protest demonstration. The idea he passed on to us is if you see something that’s wrong, it’s your personal responsibility to do something about it.”

A family friend, Debra Mulé, told Newsday about Cooper’s father, “He brought his recording camera to public meetings to keep people honest. He was always someone who would speak out for things he believed to be right and he didn’t care what kind of a scene he caused or what feathers he ruffled — he was going to speak out.”

Several people commented on Christian Cooper’s video saying Amy Cooper was being racist and endangering his life by calling the police and saying he was threatening her. Commenters also said she should be investigated for animal abuse because of the way the dog was being treated in the video.

Christian Cooper’s sister, Melody Cooper, wrote, “I know part of you (the Dad part) enjoys setting these idiot Karen’s straight, but be careful. I agree that she should be reported for calling in a false report. I LOVE oh she was so concerned about her dog that she started choking it as she called the police.”

Asked if her brother was doing OK, Melody Cooper wrote on Twitter, “He’s fine, thankfully. No I told him to be careful! As soon as she leashed the dog, he said thank you stopped filming and went about his business. This kind of entitlement dog walking happens weekly in the Ramble.”

Richard Spedale wrote, “What a heinous woman. Racism driven by white privilege (or is it the other way around?). Guess they go hand in hand. Pathetic. I am relieved you weren’t physically injured, despite the outcome she was clearly hoping her white privilege would result in. Sadly, I can’t say the same for her poor dog. The agency that should have been called is the ASPCA.”

Tanya Noel wrote, “And this is how black men are killed. The cops would have shown up guns blazing in ‘defense’ of the poor white lady ‘in (fear) for her life’ after she was the one to approach him with her hand in his face/camera..” Tyhina Canto added, “The amount of people showing concern only for the dog is alarming….my stomach clenched when she started her hysterical lies. You do realize a black man in America can get killed for less than this?” 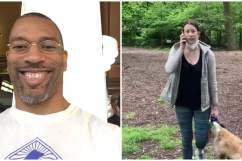 When you are too invested in bigotry that you willingly choke your own dog. https://t.co/UZuctIDjzX

Another Facebook commenter, Sarah Allen, wrote, “I understand she’s being brutal towards her dog. But let’s not forget the real message here and that is the risk she is putting Christian’s life . Because African Americans do not get to explain first with police interactions a lot of the time. This kind of racism is unforgivable. I hope you were able to give your side of the story to any police who showed up without confrontation.”

Stacey Lager wrote, “you should send this to the police because she flat out said she was going to make up something – that you were threatening her life – when that is clearly not true. she should be charged with making false claims and misuse of 911. i have no tolerance for intolerant people (especially those that think rules don’t apply to them). she is a racist and i’m sorry your day started out like this.”

And another commenter, Jordi Schultz, wrote, ” Y’all, yes what she did to the dog is bad. But she knowingly lied to the NYPD about being in danger from a black man. She knew the cops would believe her over him based on their colors of skin. SHE COULD OF GOTTEN HIM KILLED. This nice, kind person who was just out for a nice walk! And she would of walked away Scott free. THIS. IS. WRONG. Yes, be upset about the dog, but it is not what you should be focusing on.”

READ NEXT: Multi-State Manhunt for Suspect in Brutal Killings

Loading more stories
wpDiscuz
0
0
Would love your thoughts, please comment.x
()
x
| Reply
Christian Cooper, who is black, posted a video on Facebook of a white woman calling the police on him because he asked her to leash her dog at The Ramble in Central Park in New York CIty.