Vicki Draves became the first Asian-American woman to win an Olympic medal when she won two gold medals for diving during the 1948 London Summer Olympics Games on August 3 and 6.

Draves overcame racism and poverty in her youth to excel at the pinnacle of her sport, according to Olympic.org. Google honored her determination and success with a Google Doodle commemorating the first day she won a gold medal at the Olympics.

ABS-CBN, a Philippine commercial network, reported that Draves was born Victoria “Vicki” Manalo-Draves to an English mother and a chef and musician Filipino father. In an oral history published by The Amateur Athletic Foundation of Los Angeles, Draves recalled that her parents had a difficult time as an intermarried couple living in San Francisco: “Intermarriage was frowned upon in those days. It really was not an easy situation for the family,” she said.

According to her oral history, Draves also grew up in a family that knew tragedy; her parents had a boy named Sonny who died at just a year old, before Draves and her nonidentical twin sister were born. Later on, her older sister Frances – or “Frankie” – would die of cancer. There was also little to no time spent with extended family; as a result, Draves said that she had little exposure to relatives and instead had “a small family unit.”

Ironically, the sport that would make Draves famous was also an unlikely one; according to her oral history, she originally wanted to be a ballet dancer but couldn’t because their family was too poor. So instead, she learned to swim at the age of nine or 10, taking 5-cent lessons from the Red Cross despite being afraid of the water.

“I tried some dives off the diving board and off the side,” she said. “I had a close girlfriend, Diana Radovich, who thought I was very brave.”

According to her oral history, her older sister took lessons from a Hawaiian lifeguard by the name of Eddie Ukini and she would tag along, watching her sister dive and swim at the Fairmount Hotel Swimming and Diving Club in San Francisco. Draves developed a crush on Jack Lavery, a young diver, and he began to teach her how to dive before eventually taking her to meet diving coach Phil Patterson.

Initially, Patterson told her he could not make her a member because she was half-Filipina. Instead, he created the “Patterson School of Swimming and Diving,” Olympic.org reported. He also asked her to change her Filipino surname, Manalo, to her mother’s name of Taylor; Draves did, but said she “didn’t feel great about it.”

After she began training with the man who would become her husband, Lyle Draves, she said in her oral history that she still faced prejudice, partially because of residual anti-Asian racism from World War II. Lyle Draves told the 19-year-old that he did not feel she was ready and didn’t want her to compete yet when, in truth, he had been unable to enter her into competitions due to racism.

“The athletic committee told me that I could enter Olsen and Gloria, but not Vicki,” Lyle Draves said in his wife’s oral history. “They would not give me a reason. I entered her, but she didn’t dive anyway. … I was asked why I had entered Manalo (Vicki) in the swim meet? I told them I was exercising my prerogative. When the athletic committee told me that they would tell me who to enter, I quit.”

3. Draves Won Gold Medals in a Rare Set of Competitions 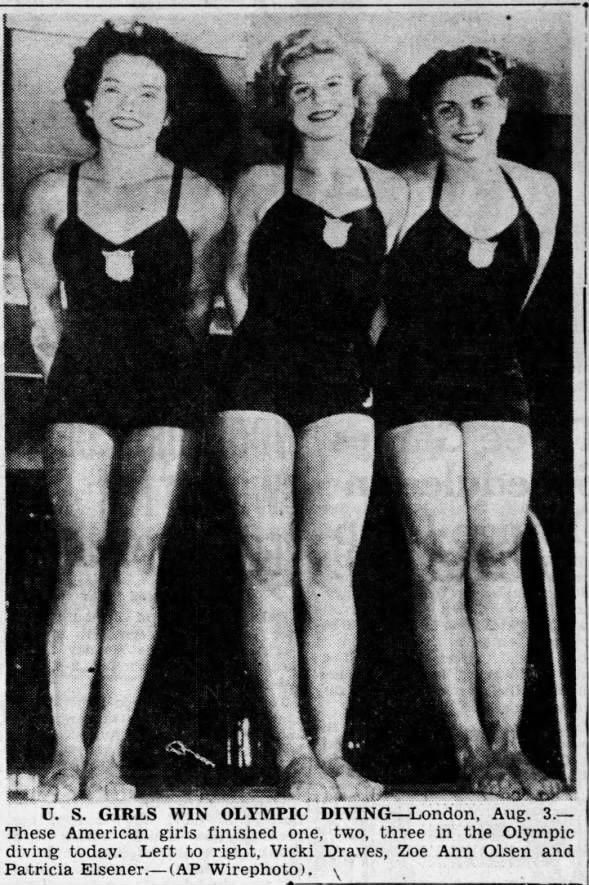 In 1946, Draves married her coach, Lyle Draves, who was working for the Navy as an electrician at the time and also training her. It was during that year when she also won her first national outdoor highboard diving championship, coming in second place on the springboard and first in the junior and senior national platform contests. She also held the highboard championships in 1947 and 1948, according to Britannica.com.

In total, The New York Times reported that she won five U.S. championships during the two-year lead-up to the Olympics. Draves told oral historians that her experience during the Olympics made her feel as though she were part of something bigger:

You just feel like this one little tiny member of a huge gathering of all these wonderful athletes from all over the world. It is one of the few times that a woman was able to have a real patriotic feeling. It is such a different experience. It is just magnificent. Something you just hold in your heart and you just never forget, no matter how long ago it was.

Even though she was incredibly nervous before each dive, Lyle said even the crowd realized her dives were winners before she did: “There were 6 or 7,000 people at Wembley Stadium, and before her head come up above water, the whole audience was applauding,” he recalled. “They knew she’d hit it. When she went in that water, it was like a knife. It was beautiful, but she didn’t know that.”

She won gold medals in the 3-meter springboard and 10-meter platform competitions, which Olympic.org reported as “a double that is much discussed, but not often achieved.” The site noted that “Draves was the first female diver to achieve the feat.” She was also the first Asian-American woman to win an Olympic medal.

4. Draves Had a Full Life After the Olympics 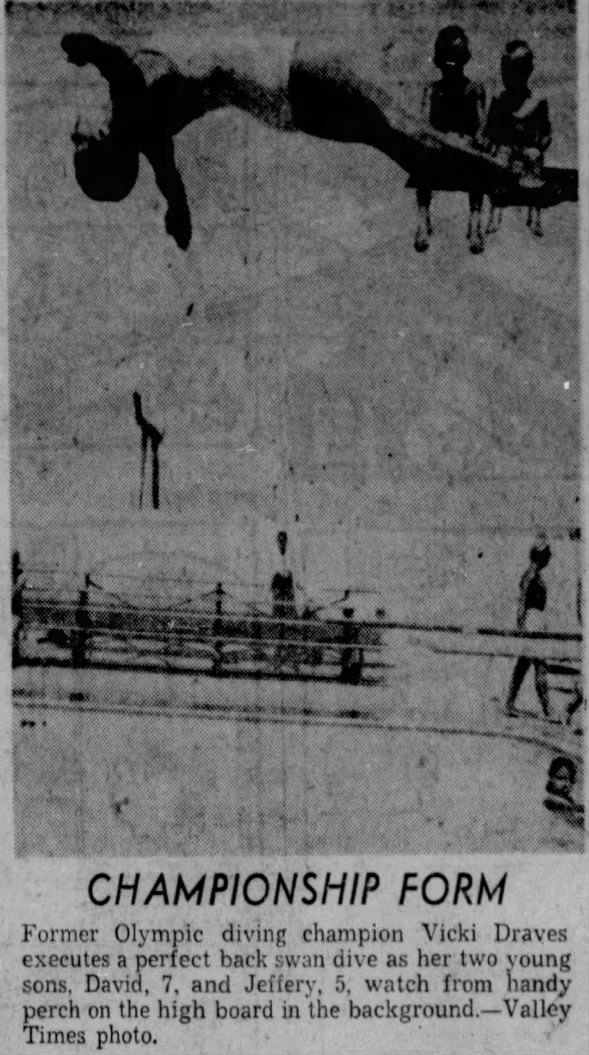 After the Olympics, Draves became a professional diver and toured in water shows as a featured diver, touring with Larry Crosby’s “Rhapsody in Swimtime” and Buster Crabbe’s “Aqua Parade,” The New York Times reported.

Olympic.org reported that she toured all over the U.S. and Europe before helping Lyle Draves set up a training program for potential swimmers and divers; the program would go on to produce several more Olympians, including Patricia McCormick and Sue Gossick, The Times reported. Draves worked as a secretary and raised the couple’s four sons, David, Jeffrey, Dale and Kim, according to The Times.

Google interviewed Draves’ son, David, who said that she was “gracious and humble”:

Growing up with a mother who was an Olympian came with notoriety, but she was always first-and-foremost, my mom. So that part was pretty ordinary. And as a mom, she had her work cut out for her. … I was a handful by myself, and then came my three brothers.

… With all the success and fame my parents received for their amazing achievements and contributions to the sport of diving, the one thing they both showed my brothers and I was humility. To win was one thing, but to be gracious and humble were the attributes of a true ‘Champion.’

5. Draves Was a Celebrated Trailblazer

In 1969, Draves was inducted into the Fort Lauderdale, Florida, International Swimming Hall of Fame, The New York Times reported. In 2005, then-San Francisco Mayor Gavin Newsom built and named a park in her honor.

A plaque there reads, “Victoria Manalo Draves was the first Asian-American woman to win an Olympic medal … Her achievement continues to serve as an inspiration for all athletes interested in competition regardless of race, creed or national origin.”

Draves died April 11, 2010, in Palm Springs, California, at the age of 85 from complications of pancreatic cancer, The Times reported, leaving behind her husband, four children and twin sister Connie.

In her oral history, Draves gave young women interested in becoming world-class divers and other athletes some advice:

If they have the desire they should follow their goals. You never know what a wonderful experience it is to concentrate on something, to set your goals and to work hard for them and then to eventually attain the ultimate. There is so much that happens to you along the way that is so wonderful. The discipline that you learn for yourself, believing in yourself, and meeting other fine people who are involved in whatever activity it is that you are trying to attain. Above all you need to find a good coach. Diving is not a sport that you can do entirely on your own. You need guidance.

Loading more stories
wpDiscuz
0
0
Would love your thoughts, please comment.x
()
x
| Reply
Draves overcame racism and poverty in her youth to excel at the pinnacle of her sport.