YouTube/FLPD FLPD released the video of Brad Parscale, former campaign manager for Donald Trump, getting arrested at his home on September 27.

Brad Parscale, President Donald Trump’s former campaign manager, was hospitalized on an involuntary hold after he threatened to harm himself while armed with a gun at his Florida home, as reported by the South Florida Sun Sentinel. On September 28, police released the video of his arrest, which features authorities speaking to Parscale’s wife, Candice Blount Parscale, who called police Sunday night, September 27, after her husband threatened suicide.

The Sun Sentinel reported that Candice Parscale had cuts and bruises on her arms and face that were caused by her husband earlier in the week.

In the video of Parscale’s arrest, which was released by the Fort Lauderdale Police Department on Monday, Candice Parscale describes to police how her husband was “going irate and came out of his office and cocked a gun … and I was like this is f***** up. So, I went to the front yard. I was trying to give him space and chill out, but then I saw him like look out the window and I heard a loud boom,” which she thought was a gunshot.

When Parscale, 44, who stands at 6-foot-8-inches tall, comes out of the house, he is shirtless and holding a beer in his right hand. After placing the beer can down on the top of his truck, a cop asks, “What’s going on?” and he replies, “So, she started saying all this s***,” before police officers off-camera yell for Parscale to get on the ground.

Parscale, standing in nothing but his khaki shorts, is then forcefully tackled to the ground by police in what’s called a “double-leg takedown.” Parscale puts his hands up and yells, “I didn’t do anything!” numerous times while multiple armed officers surround him. The FLPD turns Parscale on his back and puts him in handcuffs. 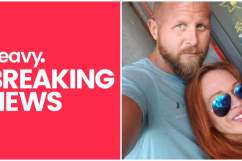 GettyBrad Parscale was arrested on September 27.

After police arrested Parscale at his home in the affluent Seven Isles community, he was taken to Broward Health Medical Center under Florida’s Baker Act, “which allows police to detain a person who is potentially a threat to himself or others,” according to the Sun Sentinel.

Following the incident, Trump campaign spokesman Tim Murtaugh said in a statement, “Brad Parscale is a member of our community and we all love him. We are ready to support him and his family in any way possible. The disgusting, personal attacks from Democrats and disgruntled RINOs have gone too far, and they should be ashamed of themselves for what they’ve done to this man and his family.”

“RINO” is a pejorative term that stands for “Republican in name only.”

After being named to the post in February 2018, Parscale was removed as Trump campaign manager in July 2020, according to The New York Times. He was replaced by Bill Stepien, but Parscale remained on staff as senior adviser for data and digital operations, according to the Trump team.

GettyBrad Parscale speaks before Donald Trump supporters at a rally in Manchester, New Hampshire, on August 15, 2019.

After Parscale was taken into custody, police removed 10 firearms from his home. He had several pistols, a shotgun and a rifle, according to the Sun Sentinel.

While it remains unclear what Parscale and his wife were arguing about on Sunday, Candice Parscale ran away from their home in fear before calling the police. She told the FLPD that she was afraid her husband was going to kill himself as he “suffers from PTSD” and has been “stressed out” over the past few weeks, the Sun Sentinel reported.