Carla Walker was only 17-years-old when she was abducted from a car, raped and strangled in Texas, according to a 1974 report in the Fort Worth Star-Telegram. Walker’s case featured multiple suspects, but none were ever convicted of the crime.

Multiple suspects and a DNA match later, police believe they have finally found her killer in what  Fort Worth Police Detective Leah Wagner told the Houston Chronicle was a moment in which she and others were “ecstatic.”

The suspect told a radio station that he accidentally killed Walker after misinterpreting a hug she gave him; however, police and Walker’s boyfriend dispute his account.

1. Walker Was Abducted While in a Car With Her Boyfriend 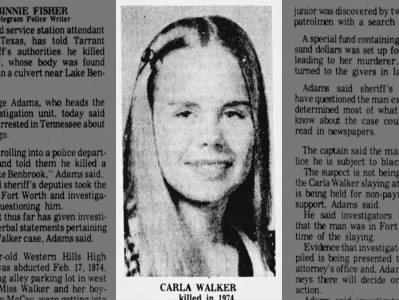 On the night of February 16th, Carla Walker was wearing a promise ring from her 18-year-old boyfriend, Rodney McCoy, and a blue party dress that she had worn to a Valentine’s Day party, according to a 1990 report in the Fort Worth Star-Telegram.

The couple had eaten at a seafood restaurant, attended a dance and spent time with another couple, the paper reported. Then McCoy drove Walker to a bowling alley, Brunswick Ridglea Bowl, to use the restroom. McCoy told the paper that he and Walker were kissing when the attacker abducted her. Here is what McCoy said happened next:

He opened the door and she just about fell out. She was leaning against the door. He started hitting me over the head with a gun. I thought he was shooting me. I heard her say, ‘I’ll go with you, just don’t shoot him.’ I didn’t see them walk away.

To alert Walker’s parents that she had just been taken, McCoy drove to her parents’ home where he was an adored and trusted guest, according to the Fort Worth Star-Telegram. “I just started driving,” McCoy told the paper. “I didn’t know what I was doing. I almost had a head-on.”

When he arrived at the Walker family home, he was “covered in blood,” Walker’s mother Charlene recounted to the paper. She called an ambulance for McCoy, while her husband drove to the bowling alley — already closed — and pounded on the door. McCoy would later tell police that the man was a “clean-cut, slender young man about 20 with short-cropped, wavy hair who talked with Texas drawl and stood about 5 feet, 11 inches … wearing a shiny green sleeveless vest and a near-white cowboy hat.”

For the next few days, the family waited for news as police conducted an extensive search by foot, horseback, car and helicopter was conducted.

2. Walker’s Body Was Discovered Days After Her Abduction 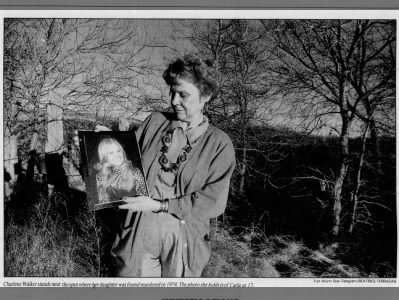 Two Fort Worth police officers searching culverts and pastures near Lake Benbrook found a “partially-clad body” on Wednesday that would later be identified as the body of Carla Walker, according to the Fort Worth Star-Telegram.

Her parents were able to identify jewelry left at the scene before they were shown her body. Although police picked up a number of clues which they released in a news conference covered by the Star-Telegram, they held some information back. Police did disclose autopsy findings which posted that Walker had been dead for two to two-and-a-half days, and reported that “the girl was raped and strangled to death sometime Monday.”

The grisly discovery was difficult on the family, and the Star-Telegram reported. Walker’s brother Jim, told the Star-Telegram that he remembered “hearing his mother scream” and McCoy said he “collapsed to the floor” over the news.

3. Several Suspects Came Over the Years But No One Was Ever Convicted 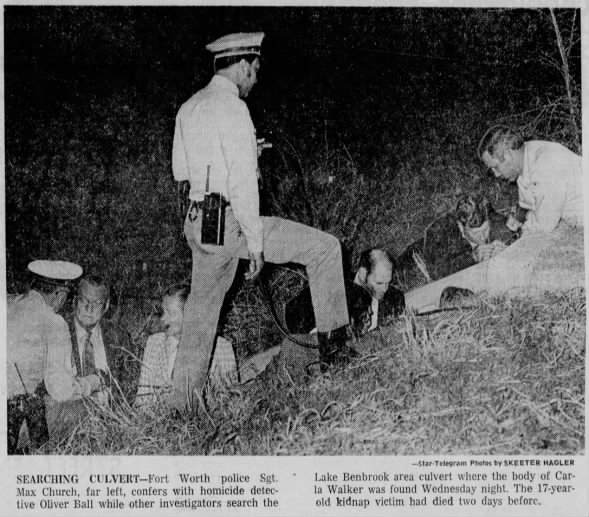 Detective Lieutenant Oliver E. Ball said that he received at least 200 calls from people with tips and students at Walker’s high school were also providing information about the case, the Star-Telegram reported. A reward was also established and over the years, multiple people emerged as suspects in her murder.

First, 21-year-old Tommy Ray Kneeland confessed to the crime, according to the Fort Worth Star-Telegram. Walker was on trial being accused of the murder of two others. Even Walker’s old boyfriend identified him. However, Kneeland failed a polygraph from D. E. Wheeler, who said, “I told him that I could not pass him on the Carla Walker killing.

After him, police focused on a different man they were accusing of committing a series of burglaries. He shocked them, according to what Detective J. F. Terrell told the Star-Telegram, said, when he told them, “I wondered when you were coming after me for Carla Walker.” Terrell nearly got the man to confess in 1975 but was interrupted. When he tried again in 1976, the man said, “You almost got me with that (routine) last time, but I’ve learned some things since then.”

A couple of years later, a man identified as Jimmy Dean Sasser told police that he had killed Walker in 1977, the Fort Worth Star-Telegram reported. Sasser was charged and indicted for the crime. But seven months later, Sasser was released from prison and said that he had lied about the murder because his marriage had fallen apart and he was depressed.

In April of 2019, the Fort Worth Police revealed that police had received a letter from someone who said he was Walker’s killer, which they said further down in the thread that they had received in 1974.

Police have not revealed if they know the author of the letter today. However, in 2019, the Fort Worth Police department implored the letter’s author to identify themselves and come forward via Twitter.

5. A Suspect Was Identified & Named in Late September

Police had tried running DNA from a garment at the crime scene — a bra that belonged to Walker — through the FBI’s Combined DNA Index System (CODIS) but came up empty, according to local CBS station DFW. However, in late September, police announced that the DNA agency, Othram, had found a match to one of Glen McCurley’s relatives and that led police to take another look at him.

At the time of the murder, police had looked at McCurley because he owned a .22 Ruger pistol, according to the Houston Chronicle, which matched the magazine was found at the crime scene. After collecting DNA from McCurley’s trash, they confirmed that his DNA was a match.

In a radio interview with KRLD, as reported by the Fort Worth Star-Telegram, McCurley said that he was drunk when he came across Walker and her boyfriend. McCurley said that he saw McCoy hit Walker and he “went over there and opened the door, and knocked him off of her.” He said he pulled Walker from the car where they talked. McCurley said that Walker told him “she was thankful for me getting him away from her.” McCurley then said, “She just gave me a hug. I gave her a kiss. I mistook her for something else,” he said. “I didn’t mean to do it.”

Other than a car theft, McCurley had no other criminal record, according to the Houston Chronicle.

The 77-year-old McCurley was arrested on September 21, has been charged with capital murder and is being held on a $100,000 bond at the Tarrant County Jail, according to the Houston Chronicle. “I can’t find any cold cases with a live suspect that are older than this that have been solved,” said Wagner told the paper. “Our first priority was to find out the truth for the (victim’s) family, and because we did that, it was just a tremendous feeling of relief.”

READ NEXT: Reagan Hancock: Murdered Texas Woman Had Her Baby Cut From Womb