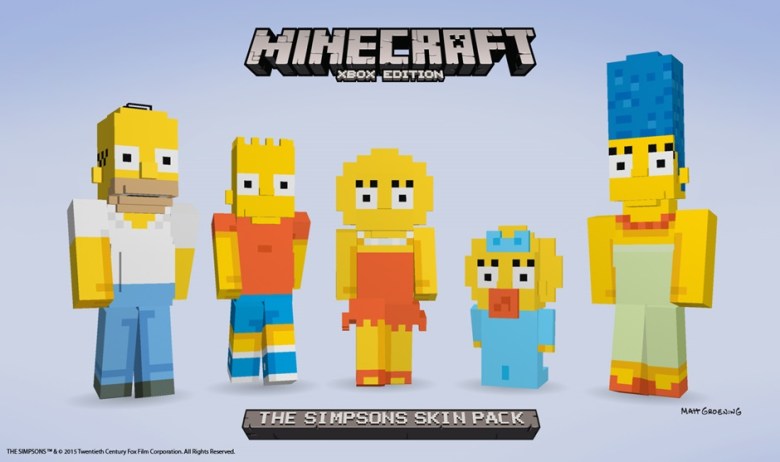 We’ve seen quite a bit of skins added to Minecraft after the past few years. And now, the game will get yet another skin pack based on the Emmy Award-winning animated series, The Simpsons.

The downloadable pack will include Homer, Bart, Marge, Lisa, Maggie and nineteen other characters from the wonderful world of FOX’s Springfield. So if you were looking for a blocky version of Springfield’s finest, be on the look out for the upcoming DLC when it launches, which will be sometime in late February 2015.

“We have an active community of more than 14 million die-hard Minecraft fans on Xbox Live enjoying the wide range of downloadable content on Xbox, and they have been clamoring for us to bring Simpsons characters to the game,” said Phil Spencer, Head of Xbox, via the Xbox Wire. “We are thrilled to partner with Twentieth Century Fox and Gracie Films to bringTHE SIMPSONS to life on Minecraft Xbox 360 and Xbox One editions.  I can’t wait to see what the community creates.”

Minecraft has over 100 million downloads since its initial launch in 2009, so it’s safe to say that this content pack, which will only cost users $1.99 USD, will do quite well. The Simpsons Minecraft downloadable pack will be coming first to Xbox One and Xbox 360, with future editions on the way.