Square Enix has announced the Final Fantasy XV voice cast for the English version of what is one of the most highly anticipated upcoming RPGs of 2016.

On its official blog, the developer and publisher revealed the voice actors behind the main characters in FFXV. Interestingly enough, many of the actors have worked on Square Enix games in the past.

Jim Pirri’s name might be familiar to many of you, as he’s worked on numerous notable video games over the past few years, including Uncharted 4, Rise of the Tomb Raider, The Order: 1886, and even World of Warcraft: Warlords of Draenor. Ray Chase is also no stranger to the world of video games, as he just voiced Louis Gallois for Square Enix’s latest release, Deus Ex: Mankind Divided, as well as Fallout 4 and Call of Duty: Black Ops 3. Amy Shiels’s voice also appeared in Black Ops 3 alongside Chase.

If you’re not quite sure if you recognize any of the actors listed above, check out the Final Fantasy XV English Voice Cast Trailer released by Square Enix this morning (which we’ve embedded at the top of this post) to see if any of their voices sound familiar. Undoubtedly, you’ll notice a few recognizable voices.

Of course, Square has released a slew of information over the past few weeks regarding the now delayed Final Fantasy XV, including information about its season pass, why FFXV was delayed, and an entire hour of gameplay for our viewing pleasure. Square Enix also took to the official Final Fantasy XV Facebook page to release links to the game’s soundtrack by Florence + the Machine on Spotify, and we highly recommend you give the tracks a listen.

Final Fantasy XV will release on November 29th for both the Xbox One and PS4. Stay tuned to Heavy’s Gaming News for the latest. 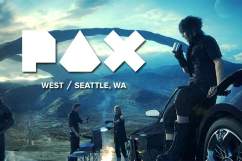