For those of you who’re ready to scratch that Dynasty Warriors itch, the date January 17th should be of importance to you. Fans of the Musou genre and PS4/PS Vita owners will undoubtably enjoy the game we’re set to cover.

Fate/EXTELLA: The Umbral Star will throw the most masterful button mashers into the ultimate war to settle the score. The visual novel series known as Fate/stay night has already delivered other gaming experiences in RPG and fighting game form. But this upcoming venture lets you tear into hundreds of enemies as the familiar Servants seen throughout the world of Fate. We delved into this action-packed title from Xseed and Marvelous and are ready to break down the finest aspects of this little known game.

Here’s our preview guide on everything there is to know about Fate/EXTELLA: The Umbral Star.

1. The Game’s War Takes Place in a Parallel Universe Within a Visual Novel/Anime Series

Fate/EXTELLA: The Umbral Star’s plot places it within the same parallel universe that was the main focus of the Fate/Extra game. Both games are linked to the original Japanese visual novel franchise, Fate/Stay night. The game’s events place it right after the conclusion of the “Holy Grail War.” As the main Praetor (Master) who become victorious alongside your servant (Nero Claudius), you are granted complete control over the Moon Cell Automation computer.

This lauded piece of technology is capable of granting any wish that one desires. The computerized world you reside in falls under your kingship due to you and Nero owning the Regalia Ring. This allows the both of them to rule over the Servants they defeated during the pervious conflict. However, a new enemy rises and reveals that they hold a Regalia Ring of their own. This in turn leads to the start of a new war that you, your Main Servant and allies become a part of.

2. The Gameplay Evokes the Beat ‘Em Up Chaos of the Musou Games

What sets this game apart from the PSP RPG that came before it is the fact that you can actually control Servants during intensive battles. You’ll run around various stages that task you with taking over enemy sectors and defeating the main Servant who opposes you. Your chosen Servant dishes out damage by defeating hundreds and hundreds of enemies with swift melee attacks. Some Servants are master swordsman, while others choose to head into battle as magic spell casters. As you venture through each stage, you’ll find yourself racking up a huge amount of enemy kills and making your way towards ultimate victory.

The flashiest finisher comes courtesy of the battlefield clearing “Extella Maneuver,” an attack that strikes down a bunch of enemies simultaneously. Servants can also tap into another more powerful form of themselves by changing into their “Moon Crux/Moon Drive” self. For example, Nero’s formation lets her tap into the power of fire and Tamamo no Mae’s version focuses on the might of ice-based powers. In between each battle, you’ll get to build up the relationship with your main Servant by speaking with them, upgrading their abilities and taking on additional side missions for future missions.

3. Each Playable Servant is Tied to a Specific Battle Class

Fate/EXTELLA: The Umbral Star includes several Servants from the Fate/Extra, Fate/stay night, Fate/Apocrypha and Fate/Grand Order series spinoffs. These powerful warriors stick to a certain fighting type, such as Nero Claudius’ affiliation with the Saber sword wielding class. All of the characters included in the game and which class they’re tied to can be seen in the list posted below:

4. All of the Servants Fight Under Their Chosen Party Affiliation

As the main Praetor who’s backed by Nero Claudius, you’ll head into battle against other parties who’re also lead by another Servant. This clash between armies is lead by the following Servants and feature a number of powerful generals who fight underneath them:

Besides the Standard Edition of the game, fans can go all in and obtain the extra special “Noble Phantasm” box set. This Limited Edition release comes within a beautiful custom box and includes the following items: 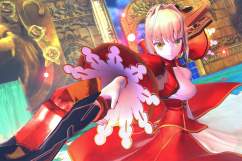