DICE and EA Sports are releasing free Star Wars: Battlefront II-themed DLC for Battlefield 1, FIFA 18, NHL 18, and NBA Live 18 to commemorate the release of the game.

All players who log into Battlefield 1 starting November 8 will get the Totokia War Club in a special Battlepack, according to a blog post by EA. The offer ends on December 31, 2019, giving you plenty of time to scoop it up. The club was developed in Fiji and features a heavy spiked head with a beak meant to puncture holes in people’s skulls.

Including the Totokia War Club to celebrate the release of Star Wars: Battlefront II is a stroke of genius because the design of the weapon influenced the design of the Gaderffii or gaffi stick used by the Tusken Raiders on Tatooine in Star Wars: A New Hope, according to an article by historian Bruno Claessens. Fun fact: the club is often referred to as the “pineapple club” due to its spiky head but it’s actually designed after the pandanus fruit.

Unfortunately the other DLC for FIFA 18, NHL 18, and NBA Live 18 isn’t nearly as exciting. They’re basically just T-shirts your in-game characters can wear that are based off of the emblems of Inferno Squad, an Imperial special forces commando unit that is the main focus of the Star Wars: Battlefront II single-player campaign.

For FIFA 18, players can get the Inferno Squad-inspired kit in FIFA 18 Ultimate Team from November 7 to 28. Your Hockey Ultimate Team in NHL 18 can get their own kit if you logged into your HUT accounts before 11:59 p.m. PST / 2:59 a.m. EST on October 31. The packs are in your inbox and will remain available until you open them. Finally, NBA Live 18 will grant you court graphics and home and away kits in addition to Inferno Squad-themed Live Events to unlock limited-time gear from November 7 to 14.

DLC is limited to one offer per person. All offers require an internet connection and an EA account.

Star Wars: Battlefront II will be releasing on November 17, 2017.

The game will follow up from its 2015 predecessor, featuring large scale multiplayer battles and starship dogfights set in the Star Wars universe from the prequels to the original trilogy. A single player campaign is also being included after it was missing from the initial game.

While there is free DLC and no season pass in sight, Battlefront II was caught in the crosshairs during its beta for having a pay-to-win economy with loot boxes filled with Star Cards offering big advantages over players who don’t have them. Of course, the more loot boxes you buy, the more advantages you have over players. EA and developer DICE did tone down the loot boxes and progression system based on player feedback during the beta. Changes include removing the highest tier of Star Cards from crates, making players reach a certain rank to craft upgraded Star Cards, locking weapons to specific milestones, and unlocking class-specific gear and items simply by playing as that specific class. 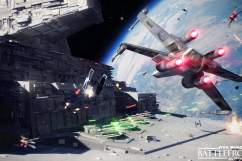