It may have taken a while for an official reveal, but Predator has finally arrived in Fortnite and he comes with all sorts of cosmetics to unlock on top of his skin.

There are a lot of quests to complete if you want to get everything, but if you’re in it for just the skin, all you have to do is eliminate the Predator himself, which is no small task.

If you manage to do that and you still want to complete some more challenges, it’s a good thing you have the skin unlocked because you’ll need it to complete this task.

One challenge asks you to visit the Predator’s Apartment while wearing the skin at Hunter’s Haven. Getting your hands on the skin is just part of the quest, but it’s arguably the hardest part.

Here’s where to find the Apartment. 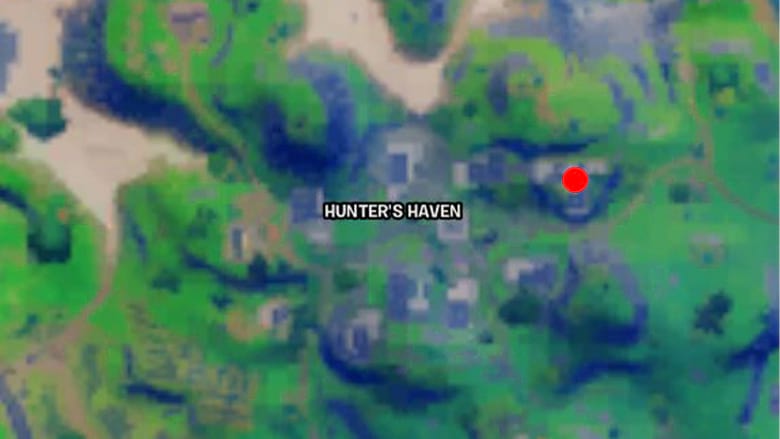 Epic GamesHunter’s Haven is where you’ll need to be.

Obviously, you’re going to want to head to Hunter’s Haven, one of the new areas introduced with Fortnite Season 5.

The apartment can be found on the far right side of the location, so it shouldn’t be difficult to find as it just stands alone from the rest of the POI.

There are all sorts of interesting things to explore here if you have time, so make sure you check out what’s hiding in the apartment.

By doing this quest, you’ll unlock a special emote that’ll allow to remove the Predator’s mask and allow him to go maskless.

This is similar to the emote that let Wolverine transform his pickaxe into claws, so if you’re familiar with how that worked, then you’ll be right at home here.

While many thought this was going to be a separate style, in many ways this is a lot better because it’ll allow you to switch up your look in-game if you’d like to do that.

It also saves you the trouble of having to go through your locker and switching styles, which is pretty difficult if you have a lot of skins.

Here's where to find Predator's Apartment in Hunter's Haven in Fortnite.