On November 17, Fortnite introduced The Last Laugh bundle into the game, but you’ll notice that it didn’t actually come to the in-game Item Shop.

Instead, the bundle is part of an actual in-store promotion that you’ll have to purchase physically, at least for the time being.

This means you can head to stores like Best Buy or Walmart to pick one up if you’re dying to get your hands on the new skins now, or you could wait until it actually arrives in Fortnite with a digital edition.

Epic Games releasing physical Fortnite bundles like this is nothing new, but given how popular these skins are, it does seem like a bit of a head-scratcher. With that said, there will still be a digital release, but it’ll be a little while before it happens.

Where to Buy The Last Laugh Bundle Digitally 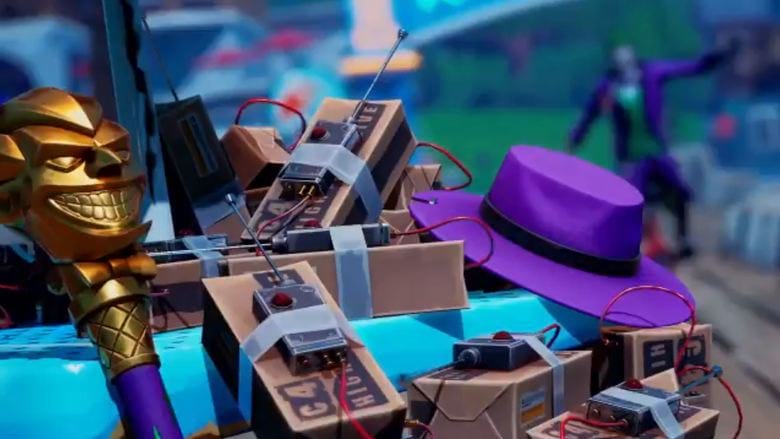 Epic GamesThat’s a lot of explosives.

If you don’t want to get the physical copy of the bundle, you’ll have to wait until December for it to come to the in-game store.

On the official announcement page from August, Epic Games gave this update:

We’re not entirely sure why this is the case, but this is your confirmation that it’s coming to the game in the future in digital form, but just a few weeks later.

You likely already know about all of the skins that are included in this bundle, but there’s a bit more than that that you’ll be able to get your hands on.

Although you have to spend real money on this instead of V-Bucks, you’ll be able to recoup some of that loss with 1,000 V-Bucks being included.

Here’s a look at everything that’s in the set:

Due to this being available physically, we can expect this bundle to stick around for quite a while as we still see older bundles from a year or so ago still floating around.

READ NEXT: How to Get the Fortnite Rainbow Fog Wrap For Free