The Fortnite Season 7 Week 5 Legendary quests are now live and completing these is your best way to earn XP in a hurry.

Unlike the weekly quests, these are on a strict time limit, so you’ll want to make sure you get them done as soon as you possibly can. This does mean that Week 4’s quests have come and gone.

They are also unique in that you have to do them in a certain order, so if you’re trying to do something like, say interact with a CB Radio, then it might be tough to do if you’re skipping over the first quest of interacting with a payphone.

If you’re here reading this, then chances are that you need to find the radio. Here’s where to find and interact with a CB Radio in Fortnite.

Where to Find a CB Radio 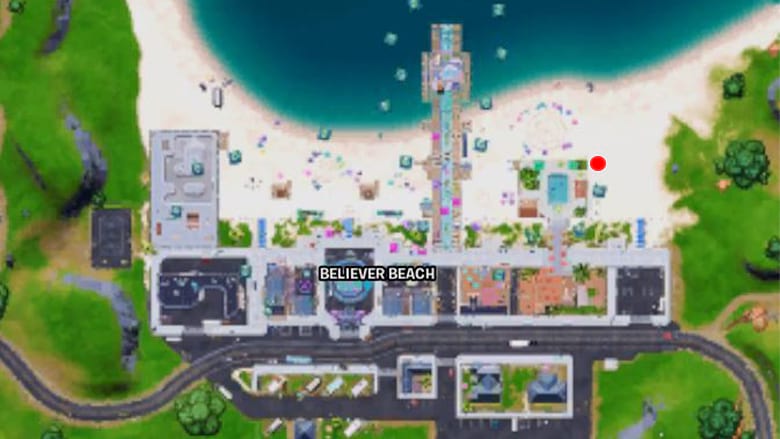 These radios can be found in several different locations around the map, and the quest tells us to look at Believer Beach for it. You can find these radios at just about any location around the map, but we’re just going to go to the recommended one.

This will mean you have to land at Believer Beach and the experience the remnants of the Cosmic Summer event.  Land near the beach itself and look for the massive radio. There are several different spots you can look, but the easiest one will be the one marked on the map above as it’s a little bit outside of the area.

All you have to do is land on it and interact with the radio. This spot shouldn’t have many weapons lying around by it, so it’ll be even easier to complete.

Although there are many radios all around the map, you won’t have to deal with any of them because you only need to interact with one. If you remember where a radio is off the top of your head and you know it’s in a safe spot, there’s no harm in just heading there and interacting with that one if you want to.

Retail Row is filled with the radios, so you can always head there for a different option.

Things Are Getting Interesting

It’s weird to hear actual voices in Fortnite, especially on the island and not in the cutscene, but that’s what the first two Legendary Quests from Sunny have given us.

These Legendary Quests have actually given us a decent amount of storyline to look at, which is pretty cool because Epic definitely has a big story to tell.

The next quest takes us to the newly renamed Holly Hatchery, which is pretty much the same as Holly Hodges except completely taken over by aliens. You might not like what you find there, but you’ll have to suck it up and head there if you ever want to place these welcome gifts.

You might not want to be thanking our alien visitors, but it seems like our best bet if we don’t want them to destroy life on the island as we know it.

READ NEXT: How to Unlock Armored Batman in Fortnite Season 7