NOTE: David Matusiewicz is not the shooter from yesterday’s New Castle Courthouse shooting incident in Delaware, as previously reported by numerous news outlets. Cops are now saying it was his dad, Thomas. READ MORE HERE: 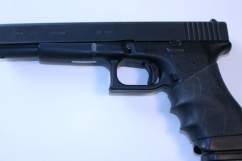 Contrary to prior reports, David Matusiewicz, 45, is not the now-deceased gunman who stormed the New Castle County Courthouse in Wilmington, Delaware, and opened fire on the morning of February 11 and opened fire. Cops are now saying he is actually the son of the real shooter, Thomas Matusiewicz.

Here’s what you should know about Thomas’s son, David Matusiewicz.

1. He Kidnapped His 3 Kids & Took them to Central America


In 2007 Matusiewicz forged his wife’s name to secure a $249,000 loan, which he used to take his three daughters with him to Panama, Mexico, Costa Rica and Nicaragua. He and his children were eventually located in Nicaragua in 2009, living in a tiny, filthy trailer. The girls — one of whom is autistic — were ages 4, 6 and 7.Police officials transported them back to the U.S. David’s three children were returned to their mother.

2. He Was Released from Federal Prison Last Year


David was imprisoned for 48 months, convicted of international parental kidnapping and bank fraud. At the time of David’s capture in 2009, police came across his motor home and discovered fake Social Security cards and false passports for him and his three children. The FBI issued a press release on his case. He served time at the Philadelphia Federal Detention Center and a federal prison in Bastrop, Texas. He was released in April 2012 to a halfway house, then home confinement, and was fully released on September 5. The above document details his appeal case.

3. He Once Told His Wife “I Know How to Kill People & Leave No Trace”
According to Delaware Online:

While they were married, he reportedly kept several weapons in the house, including a .357 magnum, and had taken a one-week shooting course in Las Vegas. He read survivalist books, and alarmed Belford, who during an interview recalled his wife saying, “I know how to kill people and leave no trace.”

4. He Fought Unsuccessfully for Custody of His Daughters While in Prison


Matusiewicz had the audacity to apply for joint custody of his children while he was incarcerated for their kidnapping. His wife fought successfully to end his parental rights.

5. He Was at The Courthouse for a Child Support Hearing


David was scheduled to be present at the New Castle County Courthouse for a child support modification case, scheduled for 8:30 a.m.

6. One of the Fatal Victims Was His Estranged Wife
Two women were killed in this morning’s courthouse shooting. One of the victims was David’s estranged wife, Christine Belford, 39. Another woman was murdered, and two Capital Police officers were shot, suffering none-life-threatening injuries.

The gunman reportedly fired 20 shots before being shot and killed by police. Above is police radio chatter captured during the shooting.

8. His Father Allegedly Never Made it to the Metal Detectors


A state police spokesman stated that Thomas never made it past the courthouse lobby’s metal detectors before he started shooting. Defense Attorney Brian Chapman gave his thoughts on what may have occurred to NBC Philadelphia:

When I first heard about this, my first thought was that the only way someone could have gotten in there was to avoid the metal detectors, which is very hard to do, or go in firing. There are at least four or five rows of metal detectors when you go in, you put your belongings through, then you have to walk through the metal detectors. Then there are usually eight to ten police with wands checking everyone and after that you still have to walk by a desk where capitol police sit.

9. His Father Allegedly Bypassed A Potential Victim During the Shooting

I saw the gentleman and a bunch of ladies and people running out of the court building and I just hear all the bam, bam, bam, so I ran too. And the gentleman that passed me told me not to go in there. And he told me that the shooter pointed the gun at him, passed him by and shot everybody else.

10. He Was an Optometrist

Loading more stories
wpDiscuz
0
0
Would love your thoughts, please comment.x
()
x
| Reply
He's the SON of the gunman, Thomas Matusiewicz, who allegedly shot up a Delaware courthouse, killing David's estranged wife and wounding two cops. What set him off?