A vast network of tunnels that Hamas fighters are using to “surprise the enemy and strike it a deadly blow” is a key component in the raging battle between the terrorist group and the Israeli military.

One suspected Hamas tunnel ran from Beit Hanoun in Gaza to the Israeli-border town of Sderot. (Google Maps)

The most advanced tunnel discovered by the Israeli Defense Force is 1.5 miles long and 66 feet underground.

Here’s what you need to know about the tunnels and the role they’re playing in the conflict:

The Washington Post reports that Hamas is estimated to have spent around $10 million and used 800 tons of concrete on the construction of the tunnels. The Post further reports that despite the average yearly income in Gaza being $1,165, Hamas is spending millions on the maintenance of the tunnels. Al-Monitor’s Shlomi Eldar writes:

There are two types of tunnels. Some run into Egypt and are used for trading and smuggling, while others are being used for attacks on Israel.

2. Hamas Fighters Have Been Popping Out of the Tunnels Disguised as Israeli Soldiers

On July 19, pockets of Hamas fighters emerged from tunnels in Israel and opened fire on an Israeli army unit, killing two Israeli soldiers and one Hamas fighter. According to the Associated Press, the 12-man Hamas unit was disguised as Israeli soldiers. The following day, another group of Hamas militants was captured by IDF troops. The Hamas members were found with tranquilizers and handcuffs, an indication that they were planning to kidnap an Israeli soldier, Israeli officials said.

3. The Tunnels Resemble Those Built by the Viet Cong During the Vietnam War

Fox News reports that the tunnels in Gaza are “strikingly similar” to those used by the Viet Cong during the Vietnam war. The tunnels are similar in their construction and their status as a pipeline for weapons and a hideout for leaders.

Some tunnels are thought to have enough provisions to allow somebody to live in one for up to six months.

4. The Israeli Military Is Making Destruction of the Tunnels its Main Priority

The Washington Post reports that “as the full extent of the Hamas tunnel network becomes clear, the IDF says dismantling the burrows is a seminal priority.”

It’s something that may prove extremely difficult. During the Vietnam war, U.S. forces found it nearly impossible to destroy the Viet Cong’s network of tunnels. According to the History Channel:

In January 1966, some 8,000 U.S. and Australian troops attempted to sweep the Cu Chi district in a large-scale program of attacks dubbed Operation Crimp. After B-52 bombers dropped a large amount of explosives onto the jungle region, the troops searched the area for enemy activity but were largely unsuccessful, as most Communist forces had disappeared into the network of underground tunnels.

Fox News reports “…the goal of sealing off the tunnels proved elusive at best.”

5. The Construction of 1 Tunnel Was Called ‘Lethally Shoddy’

According to Al-Monitor, the digging of the tunnels involves mechanical drills instead of electrical ones to reduce noise. An article by James Verini in National Geographic details the construction:

It was about 9 p.m., and the brothers were on a night shift doing maintenance on the tunnel, which, like many of its kind—and there are hundreds stretching between Gaza and Egypt’s Sinai Peninsula—was lethally shoddy in its construction. Nearly a hundred feet below Rafah, Gaza’s southernmost city, Samir was working close to the entrance, while Yussef and two co-workers, Kareem and Khamis, were near the middle of the tunnel.

They were trying to wedge a piece of plywood into the wall to shore it up when it began collapsing. Kareem pulled Khamis out of the way, as Yussef leaped in the other direction. For a moment the surge of soil and rocks stopped, and seeing that his friends were safe, Yussef yelled out to them, ‘Alhamdulillah!—Thank Allah!’

Then the tunnel gave way again, and Yussef disappeared. 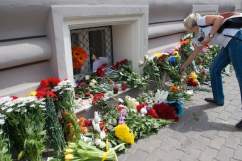 Loading more stories
wpDiscuz
0
0
Would love your thoughts, please comment.x
()
x
| Reply
Hamas' strategy in its ongoing war with Israel revolves around a network of tunnels militants are using in an attempt to catch Israelis by surprise.