Discontinued ’90s soft drink Surge is back for the first time in 12 years and is available on Amazon. The first batch is already sold out.

1. Surge Is Returning Thanks to Social Media

Remember @Surge soda? The "SURGE Movement" FB group helped bring it to @Amazon today, and it sold out in 1 hour. http://t.co/Fm2rfg19rv

Only available on Amazon, Surge is being sold again for the first time in 12 years, thanks to a huge push by loyal fans including a Twitter account backed by Coke, Facebook fan site “Surge Movement” and even a $4,000 billboard in Atlanta near Coke’s headquarters.

The first batch of Surge is already sold out, and a second will be available soon for purchase.

2. It Was Ranked Number 7 On a Top 10 Discontinued Sodas List

I will never forget when I got in trouble for bringing (unhealthy?) Surge as an after-game snack at a 4th grade soft…http://t.co/VK7WSa4Kb5

According to listserv.com, which provided a list of the top 10 discontinued sodas in 2008, Surge ranked number seven. It beat out Pepsi’s Wild Bunch, Hubba Bubba Soda, and Coke II.

Limited Re-Release Of Coca-Cola’s Surge Sells Out Within Hours On Amazon http://t.co/uSMab15560

Thanks to fan-funded “Surge Movement” t-shirt sales, the Facebook fan site was able to crowd-fund a $4,000 billboard near Coke headquarters, stating: “Dear Coke, We couldn’t buy Surge so we bought this billboard instead.” This is the largest fan-funded pledge for any discontinued product, and it seems to have worked out.

Surge was first introduced in 1996 to compete with Pepsi’s Mountain Dew and was marketed in Norway as Urge, before it was discontinued in 2003. Like Dew, it’s a highly caffeinated citrus-flavored soda that’s marketed as an energy booster. With Mountain Dew as the fourth-best-selling soda in the U.S. and sales beginning to decline, there could be an opportunity for Coke to pick up market share.

In 1996, the same year Surge was released in the U.S., the Monkees and Kiss both reunited, while House of Pain broke up. Korn released their second studio album, “Life is Peachy,” while Faith Hill and Tim McGraw got married. Tupac released “All Eyez On Me” and MC Hammer filed for bankruptcy.

1996 was also a great year for movies including Independence Day, Twister, Mission: Impossible, The Nutty Professor, The Rock and two Disney movies, The Hunchback of Notre Dame and 101 Dalmatians.

The same year, 3rd Rock from the Sun, Dexter’s Laboratory, The Daily Show, 7th Heaven, Superman: The Animated Series and Sabrina, the Teenage Witch all debuted.

Pokémon Red and Green released in Japan, Braveheart won the 68th Academy Award for best picture, Major League Soccer had its first game and the 1996 Summer Olympics in Atlanta began. 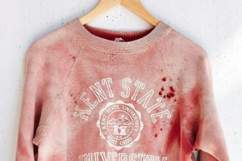 Loading more stories
wpDiscuz
2
0
Would love your thoughts, please comment.x
()
x
| Reply
Discontinued '90s soft drink Surge is back for the first time in 12 years and is available on Amazon. The first batch is already sold out.