A Maryland-based surgeon has died after contracting Ebola. Dr. Martin Salia got the virus while he was working to help fight the Ebola in his home nation, Sierra Leone. He was being treated at the Omaha Medical Center in Nebraska after arriving there on November 15. He is the second person to die of the disease in the United States.

Dr. Salia pictured with his family in August 2014. (Facebook)

Dr. Salia, 44, was not a U.S. citizen but does have permanent residency. He lived with his wife and two sons in Annapolis, Maryland, according to his Facebook page. His page adds that he studied at the College of Medicine and Allied Health Sciences at the University of Sierra Leone.

Upon his death at the Nebraska Medical Center, the hospital’s biocontainment unit medical director said:

Dr. Salia was extremely critical when he arrived here, and unfortunately, despite our best efforts, we weren’t able to save him.

You can watch a video of Dr. Salia performing surgery below:

2. Nebraska Was the Only Hospital Ready to Take Dr. Salia

The Associated Press reports that Dr. Salia was due to arrive in Nebraska on November 15, having being diagnosed on November 13. The agency goes on to say that Nebraska was chosen to treat Salia because staff at Atlanta’s Emory University and the National Institutes of Health in Washington are still under a 21-day monitoring period.

3. Prior to Being Moved to the U.S., He Was in ‘Stable Condition’ in Sierra Leone

USA Today reports that Dr. Salia had been working as a surgeon at the Kissy United Methodist Hospital in Freetown, the capital of Sierra Leone. He is in stable condition at a separate Sierra Leone hospital. That country is among the worst hit by the 2014 Ebola outbreak.

4. A Hospital Where He Previously Performed Surgery Was Destroyed by Rebels in Sierra Leone

According to a 2013 online profile, Salia is a devout Christian “from a United Brethren background.” The profile says that Salia first trained as a medical missionary in Burkina Faso. It adds that he came to work at Kissie Hospital, after his previous employer, Mattru Hospital, was blown up during the Sierra Leone civil war. You can watch a documentary about the conflict above.

5. His Son Was Praying for Him

His son, Maada, sent out an emotional message on Facebook, praying that his father didn’t have Ebola. Maada told NBC News about how proud he was of his father:

Even though he knows the sickness is already out, he decided to still go and help his people because he wanted to show that he loves his people. He’s really, really a hero to me. 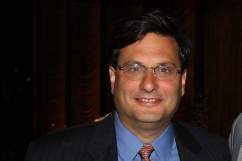