Celebrated in the March 5, 2015, Google Doodle is a man who successfully stopped millions of college students from starving to death. The man is Momofuku Ando, and he’s the inventor of instant ramen noodles. The doodle celebrates what would have been his 105th birthday. Ando passed away in January 2007 after suffering from heart failure at the age of 96. He was survived by his wife, Masako, and his two children, a son and a daughter. His secret to longevity? Eating a Chicken Ramen nearly every day. He had his last one the day before his death. Ando was a native of Japanese-controlled Taiwan but moved to Japan and became a Japanese citizen after World War II.

Here’s what you need to know about this instantaneous genius:

1. He Got His Idea for Quick Noodles During Food Shortages in Post-War Japan

Ando capitalized on food shortages in Japan in the post-World War II era. After surrendering, the Japanese government had encouraged the public to eat bread instead of noodles. The reason for this was that noodle companies at the time were too unstable to satisfy demand. This inspired Ando, and in 1958 he sold his first package of Chicken Ramen. The cost was six times as much as the other noodles on the market at the time in Japan. Slowly, his business took off. After a business trip to the U.S. in 1971, he noticed how Americans were consuming noodles, so he started selling his product in its now-famed polystyrene cup. This concept kept the noodles hot longer.

Just prior to setting up his noodle empire, Ando worked in finance and sat on the board of credit union in Japan. In 1948, according to his Los Angeles Times obituary, Ando was jailed for tax evasion. Ando claimed that he was providing college scholarship for impoverished students, something which was illegal at the time in Japan. Soon after his release, Ando’s credit union went belly-up, and he lost nearly everything. Prior being involved in finance, he had owned textile store, which was a family business. When he came upon his noodle epiphany, he had just founded his company, Nissin, which produced salt in Osaka.

3. Ando Picked Chicken as His Ramen Staple Because It Avoided Religious Taboos

In his 2002 autobiography, How I Invented Magic Noodles, Ando wrote that he specifically chose chicken as the staple of his noodle empire because it didn’t break any religious taboos. He wrote, “By using chicken soup, instant ramen managed to circumvent religious taboos when it was introduced in different countries. Hindus may not eat beef and Muslims may not eat pork, but there is not a single culture, religion or country that forbids the eating of chicken.”

The New York Times reports that there are now ramen plants in Japan, Hong Kong, Indonesia, India, Brazil, Mexico, Peru, Singapore, China, the Philippines, Thailand, Hungary and Germany, as well as two in the U.S., in California and Pennsylvania. You can watch a documentary about his empire above.

4. There Are 2 Museums Dedicated to Him in Japan

A visitor at the Ramen Museum in Yokohama. (Getty)

There’s a museum dedicated to Ando in the city of Ikeda in Osaka, Japan. It’s called the Momofuku Ando Instant Ramen Museum. It has free admission. There’s also a CupNoodles museum in Yokohama. Inside, visitors can make their own cups of noodles using a variety of ingredients.

In 2005, special-vacuum packed noodles were made so that Soichi Noguchi, the Japanese astronaut, could eat ramen while onboard the space shuttle Discovery. At the time Ando said, “I’ve realized my dream that noodles can go into space.”

5. Momofuku Ando Day Is Celebrated in Texas Every Year

In January 2007, the month of Ando’s death, a hospital in Dallas began celebrating Momofuku Ando Day in his honor, as detailed in this research paper about Ando. It’s celebrated on the second Friday in January. The holiday soon spread to other hospitals in the area because of ramen’s status as a ubiquitous staple for anybody needing a quick meal, including hospital staff, students, or victims of a disaster. 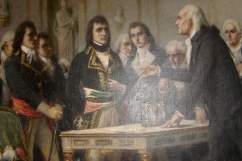