Kera Birkeland, an at-large delegate from Utah, told The Salt Lake Tribune that she was threatened in a bathroom by Trump supporters at the Republican National convention on Monday.

Birkeland said the threats came from two “pro-Trump” women because of the floor fight over rules at the convention, which started July 18 in Cleveland. She said she didn’t inform police of the comments. The floor fight ignited when anti-Trump delegates protested a fight over rule changes, according to The Los Angeles Times. 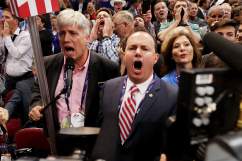 “They said: ‘You should die. They should pull the protection from the Utah delegation. You should all die,'” Birkeland told the newspaper. She said she had gone to the bathroom after the newspaper said delegates forced “a roll call vote to block the rules, part of an attempt to deny Trump the presidential nomination.”

Birkeland is a former beauty queen. According to Cleveland Magazine, Birkeland “competed in the Mrs. Utah pageant in 2012 with a platform to encourage foster parenting. She and her husband, Lars, have five kids and have also been foster parents for eight years.”

Among other things, she says she is director of operations for a company named Oil Vault, is an executive committee member of the Utah Republican Party, and is the owner and founder of a children’s center. The Standard Examiner describes her as “a 33-year-old wife and mother of five.” Her husband Birkeland’s husband ran unsuccessfully for state Senate.

Cleveland Magazine says she was “pledged to Ted Cruz.” She has spoken negatively about Trump in the past. “Not one to be dazzled by Trump’s celebrity, Birkeland said she’s still not ready to back the real estate mogul and TV personality,” said the magazine, quoting her as saying. “I don’t know enough to be able to trust him, he doesn’t have a track record. You have his words and business record, but neither of those have been stellar.”

Here’s how they reacted on Twitter to her story:

Kera Yates Birkeland is my friend. Just remember, if this is happening in our country, it is because this is the… https://t.co/kvNvX9AAJl

Threatening to kill a delegate (Kera Birkeland, Utah) is how trumpkins define the democratic process? #TyrantTrump

@FoxNews @RepPeteKing LOL! Ask Kera Birkeland how that "unity" is working out for her. pic.twitter.com/fjVwywWwCI

UT del. Kera Birkeland, one of the group wanting a roll call vote, tells NBC News she was threatened by Trump supporters in an RNC bathroom.