A student who spoke before Bernie Sanders at a Sanders rally for Clinton dumped his script and spoke out against Clinton instead. You can watch the video of his speech above.

The student, Kaleb Vanfosson, president of the Students for Bernie Club and the Young Democratic Socialists group at Iowa State, was supposed to give a speech at the Ames, Iowa rally about Sanders and Clinton supporters uniting, the Iowa State Daily reported. Instead, he spoke about how terrible Clinton is and how she only cares about billionaires.

He was escorted off stage after his speech.

During his speech, he started out talking about student loan debt and how Donald Trump wasn’t concerned about this issue. Then he added: “But unfortunately, Hillary Clinton doesn’t really care about this issue either. The only thing she cares about is clearing her debt … to billionaires… The only people who can really trust Hillary are Goldman Sachs… The military industrial complex can trust Hillary. Her good friend Henry Kissinger can trust Hillary.” At that point, the crowd cheered.

Vanfosson told the The Iowa State Daily that he was “basically assaulted” after being escorted off stage.

During Bernie Sanders’ speech at the event, he said that Clinton believed what he believed about student debt, which was that it needed to be refinanced at lower interest rates, Iowa State Daily reported.

The rally was held at the Scheman Building at the Iowa State Center in Ames on Saturday, November 5. It was listed on Clinton’s campaign website here as the “Ames Get Out the Vote Rally with Bernie Sanders.” 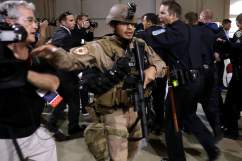 Read More
Bernie Sanders, Breaking News, Hillary Clinton, Politics
A student who spoke before Bernie at an Iowa rally for Clinton instead spoke about how Clinton only cared for billionaires. Watch the video and learn more here.