Erik Prince, who gained notoriety as head of the security contractor Blackwater, is back in the news as the alleged intermediary between President Donald Trump and Russian President Vladimir Putin.

One interesting twist in the Prince saga, though: His family tree.

DeVos and Prince are the children of an industrialist named Edgar Prince. The Washington Post says her mother has “supported anti-gay marriage efforts in the past” but Besty DeVos has not been “publicly involved” in that issue.

American Progress.org had harsh words for the Prince family. The site said that Edgar Prince “helped start the fundamentalist Family Research Council,” which was known for its anti-LGBT views. Edgar’s wife, Elsa Prince, was labeled “an extreme fundamentalist” by the site, which said she was “once called a ‘portrait of Christian hate’ by the Daily Kos,” which is a liberal site.

According to The Daily Beast, “(Erik) Prince is a vice president of his family’s foundation, the Edgar and Elsa Prince Foundation, which gave more than $1.5 million to the Family Research Council from 2014 to 2014, one of the groups that has worked hardest to oppose gay rights.”

In 2016, a head of an investment company was accused of stealing $16 million from Elsa Prince, the mother of Erik Prince and Betsy DeVos, according to MLive, which called Elsa Prince a philanthropist.

Erik Prince founded Blackwater, the controversial and now defunct security group that, according to The Washington Times, was a “mercenary firm” that “gained infamy during the Iraq War for incidents involving civilian casualties.”

The Washington Post put Prince back in the news on April 3 with a report that the Blackwater founder “held secret Seychelles meeting to establish” a Trump-Putin “back channel.”

According to The Post, “Though Prince had no formal role with the Trump campaign or transition team, he presented himself as an unofficial envoy for Trump to high-ranking Emiratis involved in setting up his meeting with the Putin confidant.” The newspaper alleges that, in the meeting, “the UAE agreed to broker the meeting in part to explore whether Russia could be persuaded to curtail its relationship with Iran, including in Syria.”

Both Erik and Elsa Prince made hefty donations to Make America Number 1, a pro-Trump Super PAC, according to the Daily Beast. The site labels Erik Prince “one of the most controversial figures of the Iraq War,” saying he “founded Blackwater, a private security firm that contracted with the U.S. military in Iraq during the war there. In 2007, Blackwater employees were involved in a mass shooting there that left 17 civilians dead, including two boys, age 9 and 11.” 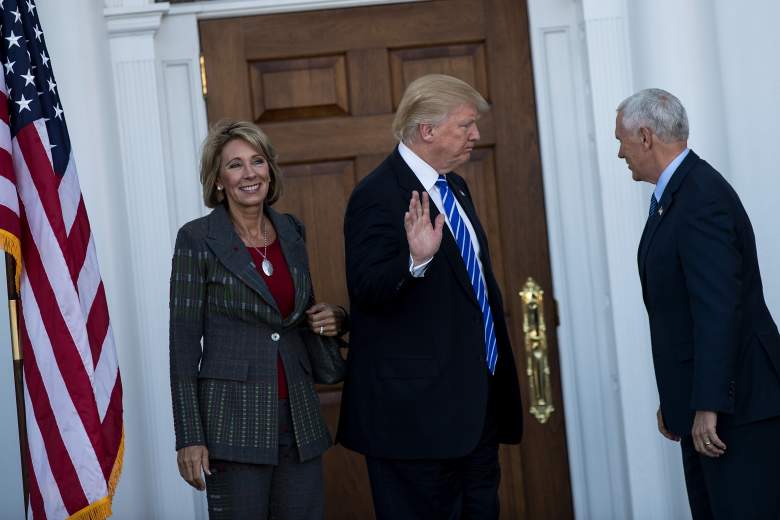 Betsy DeVos married into money. Her husband Dick DeVos – who ran unsuccessfully for Michigan’s governor in 2006 – is the son of Richard DeVos Sr., the billionaire co-founder of the company Amway. According to Forbes, Richard Devos Sr. is worth $5.1 billion and first sold cleaners door-to-door.

Richard DeVos Sr. owns the Orlando Magic. Born in Michigan and a lifelong resident of that state, according to her website, Betsy DeVos is a graduate of Holland Christian High School and Calvin College, her bio says.

Loading more stories
wpDiscuz
3
0
Would love your thoughts, please comment.x
()
x
| Reply
Erik Prince, Blackwater founder, is back in the news for allegedly holding a back channel meeting for Putin and Trump. He is the brother of Betsy DeVos.