In what has proven to be a whirlwind of new information, Suge Knight’s son Jacob says that his father’s revelation about knowing who murdered rapper Tupac Shakur is false.

In a recent interview with WENN, filmmakers Richard Bond and Michael Douglas Carlin announced that Knight, the co-founder of the infamous Death Row Records, confirmed their theory regarding who shot and killed Tupac. According to them, the chief’s ex-wife Sharitha Knight and former head of Death Row security Reggie Wright Jr. orchestrated the murder as means of actually killing Knight, but Tupac got caught in the crossfire. Knight even claims that it was only the first of what proved to be many murder attempts on his life.

A film spokesperson for Tupac Assassination: Battle For Compton, the documentary that Bond and Carlin released last year, went on to reveal more of Knight’s claims. “Culpepper told Carlin individually that not only did Knight confirm the events as portrayed in Compton, which portray Knight was the intended target and Shakur, as collateral damage, as true, but also goes on to allege that these 1996 events may have been the first in a history of attempts on Knight’s life, culminating in the recent attempted killing of Knight at the 10AK Club in Los Angeles where Knight was shot six times.”

According to Uproxx, however, Thadeus Culpepper, Knight’s attorney, has since issued a statement saying that he never made such comments to Carlin, saying: “I have never made any official statement regarding Tupac Shakur, nor have I had made any statements on my client’s behalf regarding Mr. Shakur, written or otherwise.”

Now, it seems that Jacob Knight has also taken issue with these claims, and gotten on social media to express why he feels the theory is actually false. “This is a terrible publicity stunt,” he writes on Instagram, “And these are the same ones that want to keep my father locked up. Tryna profit off my dads life is sick and he deserves his rights and freedom! They never mentioned him getting shot back then now they say this?” Neither filmmaker has commented on the statement, nor has Suge Knight, who is currently serving a prison term for a fatal hit-and-run during the filming of Straight Outta Compton in 2015. 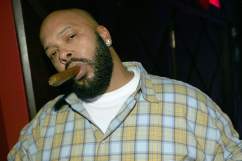