On July 15, Justine, 40, of Australia, was shot and killed by a police officer, Mohamed Noor, in Minneapolis, Minnesota. The officer’s body cameras were not activated, authorities said, and Justine Damond’s family says the yoga teacher and motivational healer was the person to call 911 because she wanted to alert police to an assault in an alley.

The Minnesota Bureau of Criminal Apprehension, which is investigating the shooting, released its most detailed accounting of it yet on July 18. BCA identified Justine Damond as Justine Ruszczyk; Damond was the name she used professionally.

“BCA agents interviewed Officer Harrity earlier today,” BCA wrote on July 18 referring to Noor’s partner, Matthew Harrity. “Officer Noor has declined to be interviewed by BCA agents at this time. Officer Noor’s attorney did not provide clarification on when, if ever, an interview would be possible.”

According to the BCA’s preliminary investigation, “officers Harrity and Noor responded to a 911 call from a woman now identified as Ruszczyk of a possible assault near her residence just after 11:30 p.m. Saturday. Officer Harrity was driving. Officer Noor was in the passenger seat. The officers drove south through the alley between Washburn and Xerxes avenues toward West 51st Street in search of a suspect. All squad lights were off.”

As they reached West 51st Street, continued BCA, “Officer Harrity indicated that he was startled by a loud sound near the squad. Immediately afterward Ruszczyk approached the driver’s side window of the squad. Harrity indicated that Officer Noor discharged his weapon, striking Ruszczyk through the open driver’s side window. The officers immediately exited the squad and provided medical attention until medical personnel arrived. Ruszczyk was pronounced dead at the scene. Both officers have been placed on standard administrative leave.”

Officer Harrity told investigators “that the officers saw an 18-25 year old white male who was bicycling eastbound on West 51st Street immediately before the shooting. This individual stopped at the scene and watched as the officers provided medical assistance to Ruszczyk. BCA agents would like to speak with this person, and anyone else who may have witnessed the incident. These individuals are asked to contact the BCA at 651-793-7000.”

“Two Minneapolis police officers responded to a 911 call of a possible assault just north of the 5100 block of Washburn Avenue S. just before 11:30 p.m. Saturday,” the state’s Bureau of Criminal Apprehension said in a news release. “At one point, an officer fired their weapon, fatally striking a woman.” The shooting occurred around 11:30 p.m. on a Saturday, July 15.

The Minneapolis Star-Tribune is reporting: “Three sources with knowledge of the incident said Sunday that two officers in one squad car, responding to the 911 call, pulled into the alley. Damond, in her pajamas, went to the driver’s side door and was talking to the driver. The officer in the passenger seat pulled his gun and shot Damond through the driver’s side door, sources confirmed. No weapon was found at the scene.”

Justine Damond was engaged to be married, according to her Facebook page. She was engaged to a casino vice president named Don Damond, and she was already in the process of forging a new family with him, using his name for her meditation classes and work in Minnesota, where she had moved.

She wrote with one joking photo on Facebook of her and Don, “My heartfelt wish for you: As you get older, your self will diminish and you will grow in love. YOU will gradually be replaced by LOVE.- George Sanders – (AND SECONDED BY ME!!)”

Outrage was growing the day after the shooting with vigils and rallies in Justine’s memory. Her stepson, Zach Damond, demanded answers from police in an emotional video that was posted to Facebook by an advocacy group.

Justine Damond had a website devoted to her healing efforts, which she wrote stemmed from watching family members die of cancer.

She wrote on the website that her interest in “supporting people to heal and transform themselves developed after she saw family members suffer greatly from depression, alcoholism and cancer,” the website’s bio reads.

“After losing much of her family to cancer she has spent many years on a personal investigative journey to discover how habits and disease develop, and how people can change and live in joy, expressing their full potential. Her adventure led her initially away from western medicine, to the world of complimentary/alternative therapies, Mind-Body medicine, and studies in eastern philosophies, consciousness and quantum physics. But eventually she came to rest in the best place of all – right in the middle – where she embraces wisdom and knowledge from many sources.”

She wrote on the website that she had “recently relocated to Minneapolis from Sydney,” and added, “Justine consults to individuals, groups and organisations while exploring the new home of the mid-west USA.”

The mayor of Minnesota has expressed great concern about the shooting of Justine Damond.

Betsy Hodges, the mayor, wrote on Facebook, “As Mayor of our City, a wife, and a grandmother, I am heartsick and deeply disturbed by what occurred last night. My thoughts are now with everyone affected by this tragic incident, especially the deceased woman and her family.”

Going by the name Justine Damond, Justine ran Tuesday night classes on meditation for the Lake Harriet Spiritual Community in Minnesota, which is “a center for conscious living.”

“Originally trained as a Veterinary Surgeon, Justine has also studied and practiced yoga and meditation for over 17 years, is a qualified yoga instructor, a personal health & life coach (EFT, Theta and Reconnective Healing practitioner) and meditation teacher, embracing and teaching the neuro-scientific benefits of meditation with trainings under internationally renowned neuroscientist Dr Joe Dispenza from What the Bleep,” the site’s bio for Justine reads.

According to LinkedIn, she received a bachelor’s degree in veterinary science from the University of Sydney in Australia.

“We are so sad to report the tragic shooting of Justine Damond. Justine was one of the most loving people you would ever meet. We can’t even imagine LHSC with out her. The article mentions there will be a vigil at 6pm tonight,” the Lake Harriet center posted on Facebook.

Damond’s son and Justine’s future stepson, Zach Damond, said in a video posted online: “My mom is dead because a police officer shot her for reasons I don’t know, and I demand answers,” Zach Damond said. “If anybody can help, just call police and demand answers. I’m so done with all this violence. It’s so much bullsh*t. America sucks.”

He added, “These cops need to get trained differently. I need to move out of here. I just know she heard a sound in the alley, so then she called the police, and the cops showed up and she was a very passionate woman, and she probably, she thought something bad was happening. Next thing I know, they take my best friend’s life. So, I’m just done. F*ck the police. Some of you are good, but like I’m just done. I’m so done. This has to stop. This has to stop. That was my mom.”

Justine Damond wrote with the below photo, “Two girls ready to head out and one teeny lady in the background NOT impressed!!!!”

Justine Damond Ruszczyk is on the right.

You can read more about Justine Damond Ruszczyk here: 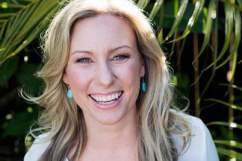