An attack in Turku, Finland, has left several injured according to reports. Just one day after the deadly terror attack in Barcelona, Spain, reports of at least one attacker with a knife were reported in Puutori-Market Square. Gunshots were also heard in the area, but reports seem to indicate that the shootings were by police.

According to NBC News, authorities in the area have told people to stay away from the city center “due to an unfolding security incident.” Authorities have not confirmed whether or not this was an act of terrorism and ISIS has not claimed responsibility at the time of this posting.

According to the New York Times, police have confirmed that a suspect was shot and taken into custody. An investigation is underway and the search for potential additional suspects has been ongoing. There has been at least one eyewitness who claims to have seen a “lifeless body on the ground.” Police have not confirmed if there were any deaths following this attack.

Photos posted on social media show the scene where people filled the streets.

The photo below shows a group of people crowded around two people that are on the ground.

The following photo shows law enforcement and other people standing outside following the knife attack.

Breaking: Man stabs people on street in Finland, shot down by police pic.twitter.com/c5bjvubO4x

A Twitter user uploaded a video to the platform in which you can hear a man yelling in the streets. Although the caption claims that he is yelling, “Allahu Ackbar,” others say that he’s yelling “watch out” in Finnish.

Turku is located on the southwest coast of Finland, approximately 85 miles west of Finland’s capital city, Helsinki. Various areas in Turku are often densely populated and the city is a tourist destination. There are several restaurants, the Turku Cathedral, and a medieval fortress called Turku Castle which houses a museum. 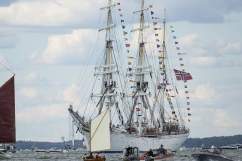