Getty Carolyn Goodman is the Mayor of Las Vegas. Her husband, Omar Goodman, preceded her in office.

Carolyn Goodman is the Mayor of Las Vegas, the site of the deadliest mass shooting in U.S. history. At least 59 people were killed and over 500 others injured during the Route 91 Harvest Music Festival. The suspect was identified as Stephen Paddock, a 64-year-old man known by local authorities. The motive behind the shooting remains unknown.

The 78-year-old Goodman is the second female mayor of Las Vegas and has been in office since July 2011. However, the city has been under her family’s leadership since 1999, when her husband Oscar Goodman was elected mayor. The two have been married since 1962 and have four children.

Here’s what you need to know about Las Vegas’ mayor and her response to the shooting. This is a breaking story and will continue to be updated.

1. Goodman Tweeted ‘Pray for Las Vegas’ After the Shooting

Pray for Las Vegas. Thank you to all our first responders out there now.

So far, Goodman’s first public response to the shooting has been a tweet. “Pray for Las Vegas. Thank you to all our first responders out there now,” she wrote.

Goodman later wrote, “The act and insanity of a madman shall not define us or keep us from living whole and meaningful lives with pride in our shared humanity. Our prayers for everyone and a huge thank you to our great law enforcement and first responders.”

The shooting happened late Sunday night when a man began firing from the 32nd floor of the Mandalay Bay Resort and Casino, across the street from the country music festival, police said. According to the Las Vegas Sun, the death toll was updated to over 50 people killed and over 200 injured.

Paddock was killed when a police SWAT team entered his room after causing an explosion to open the door. Marilou Danley, who police first described as a “companion” of Paddock’s, was killed.

“My warmest condolences and sympathies to the victims and families of the terrible Las Vegas shooting. God bless you,” President Donald Trump tweeted.

2. Goodman Is an Independent Who Didn’t Endorse Either Presidential Candidate in 2016

Goodman is not a member of the Democratic or Republican party and instead identifies as an Independent. The role of Las Vegas mayor is considered non-partisan.

During the 2016 presidential campaign, she declined to endorse either Hillary Clinton or Trump. As The New York Times noted last year, she has changed political affiliations in the past, but she wouldn’t take a side in 2016.

“I’m really praying that between now and November there’s some clarity, that somebody shows some leadership,” she told the Times.

3. Her Husband Was the Previous Mayor of Las Vegas

Las Vegas has been under the leadership of the Goodmans since 1999. Goodman’s husband, 78-year-old Oscar Goodman, was Mayor of Las Vegas from 1999 to 2011. Like his wife, Oscar Goodman is also an Independent, although he was a Democrat during his time in office.

Last month, Oscar Goodman was featured in a Las Vegas Review Journal expose, which found that Goodman was driven by Las Vegas Convention Center security officers to 260 speeches and events since 2013. He has a $72,000-a-year contract as the convention authority’s chief ambassador.

The Review-Journal reported that the contract was paid mostly by tax revenue from hotel rooms. It’s a ceremonial position created after he left office. While Goodman wasn’t interviewed in the expose, he posted a video on YouTube claiming the security was necessary for his job. 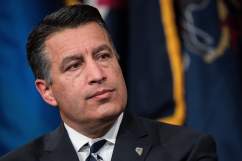 4. All 4 of Her Children Are Adopted & They Were All Born Within 38 Months of Each Other

Goodman and her husband are the parents of four children, all of whom are adopted. Their children are Oscar Jr., 47; Ross, 47; Eric, 46 and Cara, 44. According to the Las Vegas Review Journal, they were all adopted shortly after they were born. They were all born within 38 months of each other.

“I think that’s why she is so good as the mayor — she wants to take care of everybody,” Cara told the Review-Journal. “I know how much she did for all of us. I’m glad other people can share in that.”

Oscar Jr. is a doctor at the Comprehensive Cancer Centers of Nevada, while Ross is a criminal defense attorney. Eric is a Justice of the Peace in Las Vegas and Cara is a marriage and family therapist.

5. Goodman Has Supported Stricter Gun Control Measures, but Was Booed for Saying Guns Weren’t to Blame in Orlando

Goodman has been a supporter of stronger gun control measures. Back in 2013, Goodman sent a letter to President Barack Obama, asking that he sign a ban on assault weapons and high-capacity magazines. She also wanted Obama to make the national background check system tougher and close loopholes.

“We know that preventing gun violence, whether it is a mass shooting or a murder on a street corner, will take much more than strengthening our gun laws,” Goodman wrote. “We need to reverse the culture of violence in our nation so that a violent act isn’t the first response to settling a difference or compensating for a wrong.”

In 2013, Goodman also backed a resolution passed by the U.S. Conference of Mayors calling for stricter gun control measuers.

After the Pulse night club shooting in Orlando, Florida last year, Goodman’s response was criticized. As KNPR reports, she told the crowd that guns were not the issue, but the behavior was. She was booed off the stage. The Las Vegas Sun reported that someone shouted “Gun safety laws!” while she spoke. Her speech was then cut short.

Goodman is one of only two Nevada mayors to join the Mayors Against LGBT Discrimination. The other is Hillary Schieve of Reno.