The historic Fountaingrove round barn, a landmark in Santa Rosa, California known by many, was one of the hundreds of structures destroyed in the Tubbs Fire. People in Santa Rosa considered the round barn iconic.

“The historic red barn suffered severe damage, according to video footage. One of the most significant buildings in Santa Rosa, the Round Barn was built in 1899 and is the center of Fountaingrove Ranch, SFgate reported. Photos also document the complete destruction of the barn.

“The 16-sided barn was built by John Clark Lindsay, a contractor from Napa who settled in the area in 1898. It originally housed horses used in the vineyards,” according to SFGate.

Of course, the loss of life is the most tragic aspect of the California wildfires. However, historical landmarks help form a community’s identity, and its shared experience.

“While the destruction of heritage may not be as devastating as the loss of a family home, the absence of familiar landmarks holds its own visceral punch,” noted Smithsonian Magazine. “One such iconic landmark for Santa Rosa was the Fountaingrove Round Barn, built in 1899 as part of a Utopian colony managed by Kanaye Nagasawa, one of the first Japanese immigrants ever to enter the United States.”

Sorry to see the round barn in Santa Rosa destroyed by fire https://t.co/gbokGRO50m pic.twitter.com/tRKPVoLMms

You can see photos on Trip Advisor of the barn here.

In addition to the historic property, a high school and a series of commercial businesses also burned to the ground in the devastating wildfire, which is still not contained. “The McDonald’s, the Applebee’s, the Kmart, the round red barn built in 1899, the neat-as-a-pin tract homes — all burned to the ground,” reported The LosAngeles Times.

As of October 12, the Tubbs Fire was only 10 percent contained and had burned more than 34,000 acres, according to CalFire. Over 570 structures were destroyed, and almost 30,000 were threatened.

The round barn was located on property that also contained an inn and restaurant. “In the late hours of October 8, 2017, Fountaingrove Inn | The Steakhouse @ Equus fell victim to the devastating fire in Sonoma County, and guests were subsequently evacuated. At this time we are unable to conduct business in any capacity. As we have more information we will post updates. Our thoughts and prayers are with those affected by the tragic fire,” the general manager reported on Facebook on October 9. The barn sat on a hillside on the property, the page notes.

Its website explained of its history, “The Fountaingrove area was first settled by Thomas Lake Harris. Harris purchased 1400 acres of land for a mere $21,000 and established his commune in 1875. A number of buildings were erected including a winery which produced 70,000 gallons of wine, about 90 percent of the wine in Sonoma County at the time. The Round Barn was built in 1899 and is the landmark for the Fountaingrove Ranch. It was built by John Clark Lindsay, a contractor from Napa who settled in the area in 1898. Lindsay was hired to build the barn by Kanaya Nagasawa who came to Sonoma County with Harris. The Round Barn is actually a 16 sided building approximately 70 feet in diameter and almost 60 feet high that originally housed the horses used in the vineyards.”

According to Smithsonian Magazine, “The story of Fountaingrove began in 1875, with the arrival of five men from New York State. Led by Thomas Lake Harris, the group had come to purchase land upon which to form a new colony for their socialist-spiritualist Utopian commune, the Brotherhood of New Life. Among those who came West with Harris was Kanaye Nagasawa, a 22-year-old Japanese student sent on a clandestine mission by the Satsuma clan (famous for their rebellion against the Japanese Imperial Army) to learn about Western culture to help prepare Japan for the 20th century.”

You can read about people who have lost their lives in the Wine Country wildfires (there are several fires raging and at least 23 people have perished in the blazes) here: 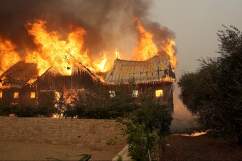 Loading more stories
wpDiscuz
0
0
Would love your thoughts, please comment.x
()
x
| Reply
The Santa Rosa round barn, an iconic historic landmark in Fountaingrove, burned to the ground in the Tubbs fire. See photos and learn about its history.