Kodak Black is looking at an early release just granted by a judge. He was originally going to be released in October but the Broward County Sheriff’s Office says his new date is August 18 according to jail records.

Kodak Black to be released from jail two months early.

In April, Black was sentenced to one year in county jail after he pleaded guilty to just two of 12 original charges. He’s been credited with time served and ‘good time,’ time scratched from a sentence for good behavior.

In March Black had three less charges to stress while he’s locked up in a Florida jail.

Prosecutors dropped three criminal charges against the rapper after his attorney Bradford Cohen argued that the drugs and guns in an Instagram live video of Kodak and his Sniper Crew were fake. Cohen said the rapper often makes videos and promos using prop drugs and guns as is common in the music industry.

Police raided Kodak’s Pompano Beach house Jan. 18 after getting word of video where he and his crew are seen with drugs and guns. At the time, Kodak faced seven charges: grand theft of firearm, 2 charges of weapon possession by a felon, possession of marijuana, child neglect because his young son appears in the video, and two probation violation charges. Dropped by state prosecutors was one of the possession charges, the gun theft charge and the child neglect allegation.

1. At 14, ‘J Black’ Released a Cover of a Hit Song Called ‘Ambition’ That Chronicled Life in His South Florida Housing Project 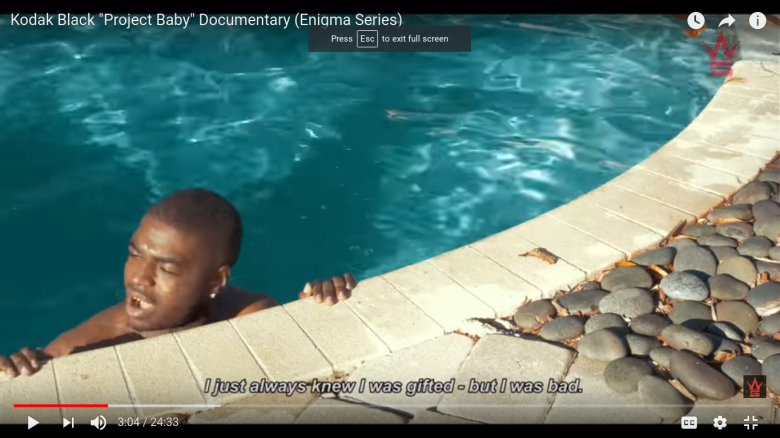 What was fresh was his elevated lyricism, for a 14-year-old. Turns out as a kid he spent a lot of time reading thesauruses and writing rhymes in a notebook he carried. 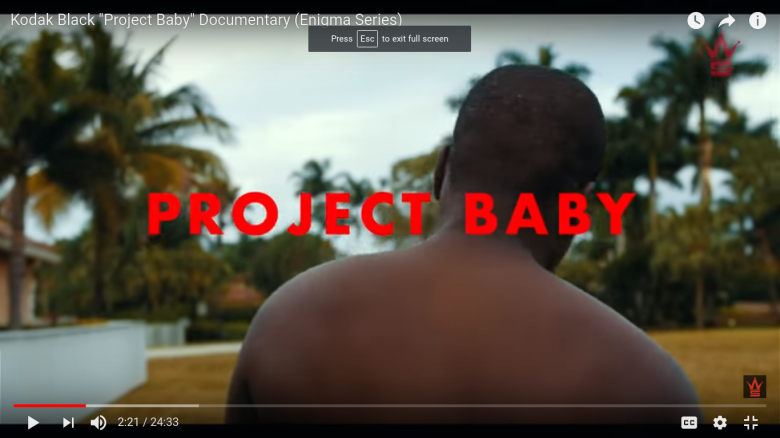 2. Kodak Has Been In & Out Of Juvenile Detention & Jail Since He Was in Middle School 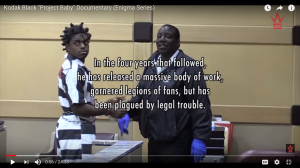 Born Born Dieuson Octave, growing up in poverty in a small but rough-and-tumble south Florida housing project meant trouble with the law from a young age. Stole a car in middle school, and expelled for fighting, and by 2015, he’d been arrested, charged and locked up for weed possession and robbery.

Kodak would be released from jail and violate probation conditions and that became a pattern. And he was on house arrest on a South Carolina charge of sexual assault at the time of his arrest which meant more new violation charges.

Kodak posted this on Instagram the day before the January raid:
https://www.instagram.com/p/BeEm-M9n7o2/?taken-by=kodakblack

His cases often show up in his lyrics, like in ‘Fall Thru:’
‘When I’m behind bars, I be facin’ charges
You the one I call, cause you keep it solid
You know I’m a catch you when you fallin’
Remember I used to have you in the projects’

Kodak toasted, and boasted, his fame literally a few hours before he was in custody again.
https://www.instagram.com/p/BeGeaqZn-6x/?taken-by=kodakblack

3.Being Locked Up Doesn’t Stop The Music For Kodak, Who Just Posted Newly Released Tracks on His Instagram

On Feb. 14, two posts from Kodak with new music and lots of sentiment: “If I Wasn’t Able To Endure The Pain, Success Wouldn’t Taste So Good.”

It’s not clear why his account with more than 5 million followers his account is not a verified one by Instagram. “Everyone Has They’re Own Journey,” he says, “Understand Mines Wasn’t Paved Of Gold, It’s A Long Hard Road.” With the hashtag, #DyingToLive

4. Kodak’s Backstory, a Pugnacious Projects Kid With Undeniable Talent, Was Recognized Early on by Superstars Like Drake

Despite his hard-knock, thug persona and demeanor, borne of his life in the projects, it was clear Kodak had serious talent. And when Drake posted on Instagram dancing to his track ‘SKRT’in 2015, it was noticed considering Champagne Papi, with 40 million followers and a mega hip hop phenom himself, paid homage to the then-17-year-old rapper.

Kodak doesn’t hold back in describing where he’s coming from lyrically and how hip hop has evolved, and if that means calling out old schoolers like Jay-Z, so be it.
https://www.instagram.com/p/BcnNLmhHw-u/?taken-by=kodakblack

Fader said Kodak’s music explores “issues that have concerned global black communities of late: redemption, mental health, self-care, and the willingness to share an occasional sense of helplessness in a way that’s more descriptive than it is prescriptive.” It’s likely not an overstatement that he’s an “essential, emerging voice.”

“Kodak articulates the constant state of affliction that living in a poverty-stricken environment can mean. He makes emotionally intelligent observations,” Lawrence Burney wrote in an essay.

In this video, for ‘XXL Freshman 2016,’ “…the freshman hopefuls are gearing up to possibly make this year’s class. Next up, Kodak Black.”

Ask Kodak and he’ll tell you he grew up with nothing but fought and with lemons made lemonade.

And now, he has more than he likely ever could have fathomed, though probably dreamed of. So it’s not a surprise to see him rhyme about his wealth and fame and share photos and videos galore.

5.Kodak Is Devoted to His Son & Shares Images & Videos of Him Regularly

At once heartbreaking and affirming, Kodak, though already a father to his son King Khalid, had a paternity test done just to be sure. Born in 2015 after Kodak released his ‘Project Baby’ and ‘Heart of the Projects’ mix tapes, the father wasn’t told by his son’s mother that he was the dad. In November of 2017 Kodak was ordered to pay $4,200 a month in child support. Although any images he shares of his son show the 3-year-old with bling and big-money things.