Yann Arnaud, a member of Cirque du Soleil, has died after falling during a performance at Volta, a traveling tent show that set up in Tampa, Florida, for a limited engagement.

“While he was performing the aerial straps number, long-time aerialist, Yann Arnaud fell onto the stage,” a statement from Cirque reads. “Emergency procedures were immediately activated and Yann was transported to the nearest hospital, where he later passed away from his injuries.”

A native of Champigny-sur-Marne, France, Arnaud loved to travel and take photographs. He enjoyed spending time with his wife, Inna D Gorelova, and his two daughters.

1. The Accident Occurred on Saturday, March 17, in Front of a Live Audience

Arnaud’s shocking fall happened in front of a live audience on Saturday, March 17. According to the Tampa Bay Times, Arnaud fell about 12 feet onto the stage below after losing his grip.

He was quickly approached by emergency personnel, as the audience looked on. Audience members have told the media that Arnaud was laying motionless on the stage.

The Hillsborough County medical examiner’s office said that Arnaud was unresponsive after the fall and was having a hard time breathing. After a few minutes, an announcement was made over the loudspeaker, asking the audience to leave the tent. Arnaud was rushed to Tampa General Hospital where he underwent emergency surgery, but he went into cardiac arrest and died.

According to his most recent post on Instagram, Arnaud was trying a new act for Saturday’s show.

“After so much work and training and staging, our straps duo act is finally in the show tonight. It’s time to go for it,” he wrote. It is unclear if he fell during this particular act.

Several people who were at the show and witnessed Arnaud’s traumatic fall took to social media to share their thoughts and well wishes. One of those people was New York Yankees outfielder, Shane Robinson, who is in town for Spring Training. You can see his tweet below.

Cirque du Soleil’s Volta is a tent show that is performed on a large, circular stage. The show is filled with all kinds of small skits and big stunts, from aerial tricks to a sensational BMX number.

“VOLTA tells a spellbinding story about the freedom to choose and the thrill of blazing your own trail. Inspired in part by the adventurous spirit that fuels the culture of action sports, the show weaves acrobatics in a visually striking world driven by a stirring melodic score. VOLTA is a story of transformation. It is about being true to oneself, fulfilling one’s true potential, and the power of the group to make that possible. It celebrates freedom as a movement,” reads the company’s description of the show.

2. The President & Ceo of Cirque Has Released a Statement & an Investigation Has Been Launched

Rest in peace, lost but forever in our hearts, condolences to family ???????#yannarnaud @yannarnophoto

Members of Cirque du Soleil are mourning an incredible loss. Not only was Arnaud a co-worker, but he was a dear friend to many of the performers involved with the company.

“The entire Cirque du Soleil family is in shock and devastated by this tragedy. Yann had been with us for over 15 years and was loved by all who had the chance to know him. Over the coming days and weeks, our focus will be on supporting Yann’s family and our employees, especially the VOLTA team, as we go through these difficult times together,” Daniel Lamarre, president and CEO of the company, said in the statement.

An investigation into what happened is currently underway. The company said that it is “gathering more information” about the accident and that they plan to collaborate with authorities.

This isn’t the first time that a Cirque du Soleil performer died while performing an act. Back in 2013, Sarah Guyard-Guillot died “after she fell 90 feet into an open pit during the grand finale of ‘Ka’ at the MGM Grand in Las Vegas,” according to The Wrap.

3 He Was Married & Had 2 Daughters

When Arnaud wasn’t on tour with Cirque du Soleil, he was spending time with his family. He and his wife, Inna D Gorelova, welcomed their first child together in August 2015.

Gorelova has been a huge supporter of her husband’s work, and has traveled the globe with him. She has posted some photos of Arnaud on Instagram, sharing his talent with the world.

“My man rocking the stage! The opening night in New Zealand,” she captioned a picture of Arnaud doing Totem in 2014.

Arnaud has posted several photos with his wife and daughter. The family had been living in Miami at the time of his passing.

“The precious day off of the week, always beautiful time spending with my family creating unforgettable moments,” he captioned a recent picture of his little girl.

One of their favorite places to visit was Disney World. Gorelova has several pictures of various trips to Disney, including Disneyland Paris, where she took in the parade back in 2014. With Arnaud in Tampa for a few weeks, a trip to Disney World in Orlando was in store. Check out some photos from their trip below.

Arnaud also has an older daughter, whom he’s posted about on social media. She lives in France, presumably with her mom.

4. He Was in La Reve in Las Vegas & He Loved to Travel & Take Photographs

16 years of his life given to the acrobatics training, living to the extreme in each presentation, only in a second change his life. My condolences to your family. #cirquedusoleil #rip #YannArnaud

Arnaud loved to travel and see new places. In addition to being a skilled aerialist, he was also a really good photographer. He’d often share his work on Instagram.

“As the run of the city start, it’s also time to discover the beauty of the city, back to photography is always a good way to escape and see the world with a different eye. Travelling the world is the best way to enjoy what nature and landscape as to offer,” he captioned a photo that he took in Canada back in August.

While Arnaud was part of Cirque’s traveling troupe, he’s been part of the Cirque family for several years.

Additionally, he was part of the cast of Le Reve, a water-based show that has a residency at Wynn in Las Vegas.

5. The Remaining Tampa Shows Have Been Cancelled

Life is short, live it to the fullest with no regrets. RIP #yannarnaud #cirquedusoleil #cirquefamily #volta

The remaining two shows scheduled in Tampa (both on Sunday, March 18) have been canceled. Cirque du Soleil confirmed that anyone who had purchased tickets for today’s shows would receive full refunds.

Volta will be traveling to Rutherford, New Jersey, for several shows beginning at the end of the month. From New Jersey, Volta is scheduled to head to Uniondale, New York, Oaks, Pennsylvania, and Seattle, Washington.

Cirque du Soleil has not shared any additional information about these upcoming shows or the remainder of Volta’s tour. 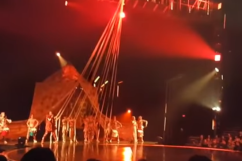