In a surprising feat of secret-keeping, comedian Daniel Tosh has reportedly been married to Carly Hallam, a Tosh.O writer, since 2016. According to People, they were married in a private ceremony in Malibu, California, in 2016.

Hallam has been a writer for Tosh.O since 2012, though it’s unclear when she and Tosh began to date, as there is little to no evidence of their relationship on either social media account.

According to TMZ, who first broke the news via inside sources, Tosh and Hallam were married on April 15, 2016. This means that an A-list celebrity managed to keep his marriage under wraps for just over two years, which is nothing short of impressive.

Hallam is a member of the Writers Guild of America, and is originally from Florida. Here’s what you need to know.

1. She’s Over a Decade Younger Than Tosh

Hallam is currently 31 years old, according to Page Six, while Tosh is 43 years old. Though it’s unclear how old they both were when they started dating, this does mean that Hallam was 25 when she started writing for Tosh.0 and 29 when she married Tosh in 2016.

2. She Writes for Another hit Show

Tonight's episode of #Brooklyn99 has my name on it! Watch to find out why @JoeLoTruglio has a tail. pic.twitter.com/krXVooKvYc

What’s more, in her IMDB listing for Brooklyn Nine-Nine, her name is “Carly Hallam Tosh”, which makes it all the more surprising that she and Tosh were able to keep their marriage under wraps for so long.

In addition to television writing, Hallam also has a penchant for some literary writing on the side— sort of. For example, this tongue-in-cheek piece on how to wear a little black dress, written for the notorious satire site McSweeney’s.

3. In Addition to Writing, She Also has Some Acting nods Under Her Belt

According to her IMDB page, Hallam has acted in several episodes of Tosh.O, and also had a small role in the 2010 film ‘New Low’.

In Tosh.O, Hallam played the roles of “protestor” and “woman on track”, and on ‘New Low’ she was a “movie starlet”. However, Hallam’s focus is clearly exclusively on writing, as her site only lists her writing accomplishments and offers scripts that she’s written, on request.

Wonder if Eminem would still switch seats with Christina just to sit next to Carson Daly.

If your name is Antonia you are legally obligated to become a yoga instructor.

Her pinned tweet reads, “Would you like a printed receipt or would you like us to email you 3-5 times a week for the rest of your life?”

In another tweet written on April 25, Hallam wrote, “The world is your oyster so forcibly remove it from its home, pry it open with a knife, cover that shit in Tabasco, and swallow it whole.” It’s safe to say that anyone familiar with Tosh’s comedy is probably starting to understand why these two are together.

On her official site, her bio reads, “Everything happens for a raisin.”

5. She Just Quashed Those old, Unanswered Rumors About Tosh’s Sexuality

An imaginary conversation between me and Selena Gomez – carlyehallam: Me: Hey, Selena Gomez. Selena: Hi…. http://t.co/TtK3IK1TiR

In the past, on more than one occasion, Tosh has reportedly been the subject of rumors regarding his sexuality, with fans speculating about whether the comedian and television host is gay or not.

In one of his standup routines, Tosh addressed the ludicrous arguments that have been made against legalizing gay marriage in the, though he didn’t address his own sexuality in the skit.

He said, “This is what I say to the most conservative person that’s so terrified of gay marriage becoming legal: Just because the state says it’s legal, it’s not like God’s gonna let them into heaven?! You can still sleep sound every night, knowing that goal line defense is up at the pearly gates going, “You’re not getting in here, *&^$#!” Do you remember the commercials they ran? A little girl would come running home from school, saying “Mommy, Mommy, Mommy! Teacher said that when I get older, I can marry a princess if I want to. And they go, “What are you gonna do when your kid says THAT?” And every parent in California is like “Whoah… We are gonna have to talk to our kids?”

Though Tosh and Hallam have yet to comment or confirm their marriage, Hallam’s IMDB name really says it all. 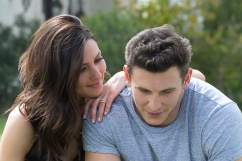 Loading more stories
wpDiscuz
0
0
Would love your thoughts, please comment.x
()
x
| Reply
Carly Hallam and Daniel Tosh have reportedly been married for over two years in secret, according to a source by TMZ. Hallam, a writer for Tosh.O, is also a writer for the hit comedy crime show 'Brooklyn Nine-Nine'.