Laquisha Ann Jones was arrested Tuesday night as the prime suspect for the beating of Rodolfo Rodriguez, a 92 year-old man, who was attacked with a brick on the Fourth of July, police say. Police say she was arrested for assault with a deadly weapon, and her bail was set at $200,000.

During the beating, a young child was standing next to her and three or four male suspects eventually joined her in kicking and beating the elderly man, according to police.

Rodriguez is currently recovering at home with multiple head and body injuries, including a fractured jaw, broken ribs and head wounds. A GoFundMe has been set up by his grandson, Erik Martinez, to cover medical expenses. It has already surpassed its initial goal of $15,000 many times over, with donations continuing to pour in past the $300,000 mark.

It’s not fully clear why Jones allegedly began to beat Rodriguez, beyond his simply bumping into her child on the street, though officials are considering the possibility of this being a hate crime, given what witnesses heard her saying to the man, according to police.

According to interviews with the family, Jones begin to beat Rodriguez after he bumped into her child. Rodriguez said that he was going on his usual evening stroll around eight in the evening in Willowbrook, the neighborhood where his family lives, when he bumped into Jones’s little girl while trying to move around her.

That’s when Jones reportedly threw Rodriguez to the ground and began hitting him with her fists, as well as a brick. Rodriguez’s grandson Erik Mendoza explained that Rodriguez doesn’t speak English, and had no idea why he was being attacked.

Luckily, a witness was driving by and saw the entire thing, as well as the three or four men who joined Jones in beating Rodriguez. The witness claims that when she confronted the woman and told her she had taken a picture of her, Jones said that Rodriguez had touched her girl.

Laquisha Jones, a 30-year-old African American woman who lives in Los Angeles, was assisted by three or four other men who are still at large, police say. Here’s what you need to know:

1. She’s Been Arrested Five Additional Times in the Past, With a Prostitution Conviction

Jones has been arrested on multiple occasions in the past, according to Los Angeles County Records.

These arrests began as early as 2011, when Jones was in her early twenties, and have continued through to 2017. This arrest will be her sixth.

2. She Shouted Racist Statements at Him & Told Him to ‘Go Back to His Country,’ Witnesses Say

According to the witness, who asked that she not be named, Jones repeatedly screamed a series of racist statements at Rodriguez while beating him, the Los Angeles Times reports.

“She was yelling at him, ‘Go back to your country,’ or ‘Go back to Mexico,’” the witness said, via The Los Angeles Times. “It was racist.”

Rodriguez is from Mexico, but visits his family in Los Angeles often. The witness explained that while she was on the phone with 911, the men returned to continue beating Rodriguez.

Of the beating, Eric Mendoza said, “He’s only been here for two days, and this is the welcome they gave him.”

Who hits an old man with a brick for God's sake? I hope she is prosecuted to the full extent of the law. Shame on her.

One week after Mendoza launched the GoFundMe site for his grandfather, over 9,000 people have donated to contribute to the current $250,000 sum.

In the GoFundMe story, Mendoza writes, “On July 4th at around 7pm, my grandfather Rodolfo Rodriguez  whose 92 years of age was going for his daily walk around the block when he was assaulted by and African American lady and five other guys. He is doing really bad, has a lot of bruises on his face and a broken cheekbone.”

3. Rodriguez Didn’t Know Why Jones Was Beating Him, Since He Doesn’t Speak English, Police Say

Rodriguez was only on his second day of vacation visiting the United States, and since he doesn’t speak English he had no idea why Jones was mad at him, though it seems like speaking English might not have helped him to understand, either, according to his family.

Rodriguez told CNN with the aid of his grandson Mendoza translating, “I didn’t even bump into her kid. I just passed her, and she pushed and hit me until she was done.”

When told that Jones claimed he was trying to take away her daughter, Rodriguez reportedly said through tears, “That’s not true. In my years I have been alive I have never offended anyone.”

The witness did not photograph the other suspects who are alleged to have taken part in the attack, but identified them as African American males.

The men ran to Jones’s defense after she had already begun to kick him while he was on the ground, police say. According to the eyewitness, the men returned to continue beating Rodriguez even after Jones had run away upon seeing a picture had been taken of her.

In a statement, the Los Angeles Sheriff’s Department said,  “Detectives began an extensive investigation into the assault. They obtained an arrest and search warrant for a suspect.Due to working every angle and lead in the case, it ultimately resulted in the arrest.”

4. Jones’s Beating of Rodriguez Has Sparked Outrage Down Partisan Lines

In response to Jones’s relentless and brutal beating of Rodriguez, there’s been an outcry against both the act and the coverage of the act itself- though the frustration is going in separate directions.

Another hateful T-rump supporter, shame on her. This gentleman did nothing wrong. Unless she is of American Indian heritage, her family were immigrants. Praying for Rodolfo Rodriguez. https://t.co/wJI7KED7AX

Many Twitter users are citing the Trump administration as a catalyst for this violent act, as seen above. Still others are claiming racism on the part of the media outlets who didn’t outwardly identify Jones as African American in their titles.

Why didn't you also show the black woman beating a 91 yr old Mexican man? Only want to call white ppl racist but not black woman who beats a Mexican 91 yr old??? #rodolforodriguez

“So sad that this happened and even more when people try to make it out as a racial issue, I hope they find this stupid lady and guys and they get the same treatment smh people are so wrong now always #rodolforodriguez ,” Twitter user Kristy_Guera tweeted.

So is @ShaunKing gonna talk about Rodolfo Rodriguez, the grandpa that got bricked in the face and told to go back to Mexico or not? He had this tweet up but deleted it. I dont wanna make the assumption he deleted it based on him finding out too late who the suspect was ? pic.twitter.com/P0wCrgUSqT

Others think that the motive is irrelevant, and anyone who would harm an elderly man like this is “beyond broken”.

The motive is almost irrelevant. ANYONE who would viciously attack a 92 year old man doesn’t deserve to walk around freely in society. If she’ll hit a 92 yo man with a brick, she’s beyond broken. Beyond repair.

5. It’s Still Unclear Whether This Was a Hate Crime or Not, & the LASD Are Looking Into the Motive

92 year-old Rodolfo Rodriguez was visiting his family in LA from Mexico when he was brutally assaulted on July 4th. A witness who intervened said that the woman who hit him with a brick was yelling “Go back to Mexico” to the grandfather. It was only his 2nd day in the US. pic.twitter.com/MPu91HFEAQ

Given that the male suspects are still at large and the motive of the assault isn’t entirely clear, the investigation for the beating of Rodriguez is still ongoing.

The eyewitness to the crime maintains that Jones was spewing racist vitriol at Rodriguez while beating him on the ground. To The Los Angeles Times, she recalled, “She was yelling at him, ‘Go back to your country,’ or ‘Go back to Mexico.’ It was racist.”

Though the motive of the act has yet to be confirmed as racially motivated, Twitter users are calling out notable activist Shaun King for his surprising absence in the matter.

King has not replied to users about why he’s not commenting, though many are suggesting it’s because the perpetrator of the act is an African American woman. Some users are even alleging that King tweeted out news of the attack, then deleted the tweet upon finding out Jones’s race.

CNN didn't even mention the race of the attackers in their column in the early morning. The link was tweeted out by Shaun King. When he discovered the attackers were black 5 minutes later, activist Talcum X deleted the tweet! https://t.co/cOOkVtDwXZ 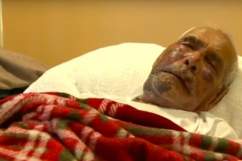 Loading more stories
wpDiscuz
0
0
Would love your thoughts, please comment.x
()
x
| Reply
Laquisha Jones repeatedly hit 92 year old man Rodolfo Rodriguez with a brick, along with three or four other male suspects who have yet to be named, police say.