Former Senator Jon Kyl has been appointed by Arizona Governor Doug Ducey to replace the late Senator John McCain in the U.S. Senate. Kyl, 76, can hold the seat until 2020, when a special election will be held to fill the remainder of McCain’s term, which expires in 2022.

According to Arizona state law, a vacant U.S. Senate seat must be filled by a replacement appointed by the governor until the next general election, which will be held in 2020. According to the Arizona Republic, Kyl might not serve until then. He told Ducey he would be willing to serve at least until the end of 2018. If Kyl steps down from the seat at the end of the year, Ducey will be required to pick another replacement to hold the seat until the 2020 special election.

When a vacancy occurs in the office of United States senator or representative in Congress by reason of death or resignation, or from any other cause, the vacancy shall be filled at the next general election. At such election the person elected shall fill the unexpired term of the vacated office.

At a press conference announcing his appointment to the Senate seat, Kyl said he would not be running in the 2020 special election. “I will not seek this seat in 2020, nor any other office in the future,” Kyl said.

Kyl served in the U.S. House of Representatives from 1987 to 1995 and then in the U.S. Senate from 1995 to 2013. He retired ahead of the 2012 election as the Senate Minority Whip, the second-most-powerful Republican in the Senate. Kyl is married with two children and four grandchildren.

According to the Arizona Republic, Kyl is the first person to be appointed to the U.S. Senate by the state’s governor in Arizona’s 105-year history.

Along with his job as a lobbyist, Kyl has recently been working as the “sherpa” guiding Supreme Court nominee Judge Brett Kavanaugh through the Senate during his confirmation process. According to the Arizona Republic, “Ducey will submit a certificate of appointment to the U.S. Senate secretary Tuesday. An aide is flying the paperwork to Washington, D.C., and will hand-deliver it to the secretary’s office. Kyl could be sworn in as early as Tuesday night, though Wednesday is more likely, the aide said. Kyl will return to a chamber where Republicans narrowly hold control and where votes can be unpredictable.”

Before he leaves office, Kyl’s vote on Kavanaugh will be key, as the Republic notes, “On Tuesday, the chamber began deliberating the Kavanaugh nomination. A Senate committee hopes to vote later this month to send Kavanaugh’s nomination to the full Senate to get him on the bench before the midterm elections.” 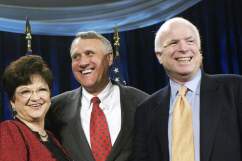 Loading more stories
wpDiscuz
0
0
Would love your thoughts, please comment.x
()
x
| Reply
Jon Kyl has been picked to replace the late John McCain in the U.S. Senate. He could serve until 2020 before a special election will be held, but might leave sooner.