A fake video of the ride “Gyro Drop” from Lotte World South Korea went viral on Thursday and had a lot of people fooled.

The video was doctored with CGI to make the ride look much more terrifying and innovative than it actually is. The video shows an extendable arm that doubles the size of the drop. The seats of the ride then drop down, attached by extendable bungee ropes, and turn into swings as the ride rotates in circles before retracting riders back up and dropping them straight down.

The video was posted all over social media from large influencers who were fooled by the slick CGI. It was posted earlier in the day by @Mewcg and @wonwoobabie and went viral from there.

The Gyro Drop Is Real, it Just Isn’t Quite That Dramatic

The gyro drop in lotte world is on another level of scary ?pic.twitter.com/Qb7UrBhmcu

Gyro Drop is an actual ride, but the reality is much less exciting. The regular ride is accompanied by virtual reality goggles which give thrillseekers the vision of a futuristic landscape during the drop. The ride is located within Lotte World’s Magic Island and has been a main attraction since 1998.

Magic Island is a man-made island on a lake which is located across the street from the main park. The drop is 230 feet and, according to one profile, the ride was intended “to combine the sightseeing qualities of the Gyro Tower and the thrills of the Giant Drop.” The dropping is speed is a mind-bending 142 miles per hour.

Nobody should ever make a real ride like this pic.twitter.com/EoSAaRR2D3

The Tower Is Regularly Closed During the Summer Due to Typhoons

According to the park’s official website, thrillseekers have to be no more than 6-foot-2 to take the plunge. The ride takes 40 people per turn. During the summer, the ride is regularly closed due to typhoons and heavy rainfall. Thankfully, one review says, “The best part of Lotte World is that most of its space is indoors so you don’t have to worry about the rain or the heat from the sun.”

The first result on YouTube is the fake viral video but the rest of the results are of the actual ride. The seats do rotate as the ride moves upward but it does not have the extendable pole and bungee seats that are in the viral video.

While some people were fooled, most users on social media quickly discovered that the video was doctored.

It’s not clear where the CGI video originated or who exactly produced it but the results are impressive. 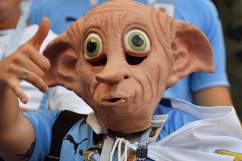 Lotte World Is the Largest Indoor Theme Park in the World

Lotte World, which opened in July 1989, is the largest indoor theme park in the world. The park is owned by Korean multinational, the Lotte Corporation, who are based in Seoul.

While the gyro drop tower was designed by Intamin, a Swiss-based rollercoaster manufacturer. The company created the world’s first freefall drop rollercoaster with the Thirteen in Alton Towers, England.

Loading more stories
wpDiscuz
0
0
Would love your thoughts, please comment.x
()
x
| Reply
A doctored viral video has been circulating the internet showing the ride "Gyro Drop" from Lotte World in South. Korea. Watch the video of the real ride.