Getty LeBron James of the Lakers defends James Harden of the Nets.

The Brooklyn Nets took on the Los Angeles Lakers in a potential NBA Finals Preview on Thursday. Despite being without their best player, Kevin Durant The Nets beat the Lakers 109-98. Even though Durant and Anthony Davis did not play in the game, the sneaker heat was still on display at the Staples Center. Check out the best kicks of the night.

While Nets forward Kevin Durant did not play in Thursday’s game he still made the trip to Hollywood to support his team. Durant is still out due to a strained hamstring that he suffered during his return to Golden State. The Slim Reaper was on the Brooklyn Nets bench to support his team in style in the Grateful Dead x Nike SB Dunk Low in the Orange Bear colorway.

Los Angeles Lakers forward LeBron James continues to reign supreme in the NBA. LeBron added another milestone to his Hall of Fame career as he debuted the low-top version of the Nike LeBron 18 in a black and silver colorway.

On Thursday LeBron joined another Lakers star, Kareem Abdul-Jabbar, and two-time MVP Karl Malone as the only players to reach 35,000 career points.

Despite the loss, James finished the game with an impressive stat line of 32 points, eight rebounds, and seven assists as continues his quest to become the NBA’s all-time leading scorer.

James is considered to be the favorite to win the league’s Most Valuable Player award this season.

The NBA’s Most Valuable Player from 2018, James Harden, continues to put on a show for the Brooklyn Nets this season. “The Beard” debuted a yellow colorway of the Adidas Harden 5 Futurenatural in the Nets’ win. Harden had yet another double-double on Thursday as he finished with 23 points and 11 assists to go along with 5 rebounds and two steals. Harden leads the league in assists and is the only current player averaging double-digit dimes.

Kyrie took the court against his former teammate, LeBron James, in a new colorway of his signature shoe, the Nike Kyrie 7. Irving was named an All-Star Game starter before tip-off of the Lakers game. This will be Irving’s seventh time being selected to the All-Star team. Kyrie talked about what it meant to him to be voted a starter after the win. 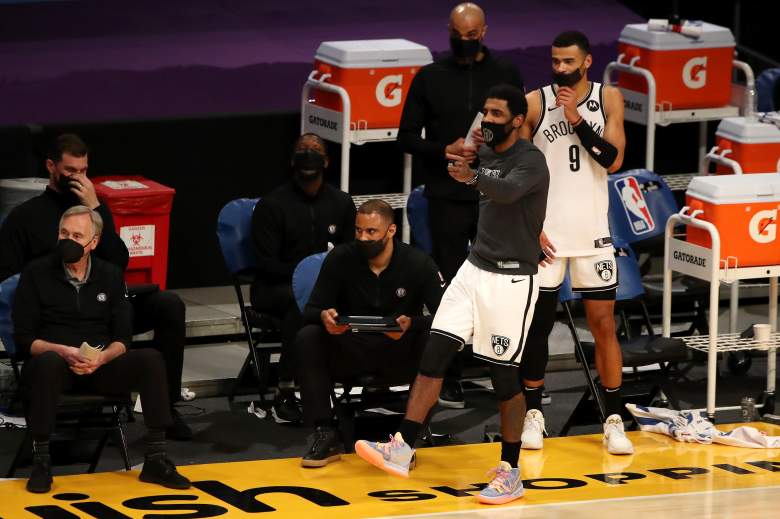 “I’m really grateful I have the support…from communities all over,” Irving told the media after the win via SNY.

"I'm really grateful I have the support…from communities all over"

Kyrie Irving reflects on being named an All-Star starter and the brotherhood of the NBA pic.twitter.com/o66I29gi11

“To be able to vote me in,” Irving said, “vote [KD] in, and hopefully we get James in as well we just always want to put on a great performance after we’ve taken hours to go home and work on our craft and then we get selected out of the best of the best in the world. That honor doesn’t just go over my head.”

Loading more stories
wpDiscuz
0
0
Would love your thoughts, please comment.x
()
x
| Reply
The sneaker heat was out at Staples Center during the Nets blowout of the Lakers.