An 11-year-old boy was killed in a shooting at the Vireo Apartments in Harris County, Sheriff Ed Gonzalez says. The shooting occurred on Tidwell Road near Houston, according to the Harris County Sheriff’s Office. Video from the tragic scene can be watched above. No suspects are in custody after the Thursday, February 3, 2022, shooting, according to officials and the investigation is ongoing.

Gonzalez tweeted, “Update to shooting on Tidwell: the child, believed to be 11 or 12 yrs old, has been pronounced deceased at the hospital. Our condolences go out to his family. Shooting occurred in the parking lot of the Vireo Apts. If you have info, pls call us at 713-274-9100 or 713-222-TIPS.” Police at the scene said the victim is believed to be 11. His name has not been released yet.

Gonzalez previously said Harris County Constable Precinct 3 deputies responded to a call of a shooting in the 12200 block of Tidwell Road about 8:40 p.m. Gonzalez said, “He was outside a residence when multiple shots were fired.” Gonzalez said investigators were at the scene. The boy was initially taken to a local hospital in critical condition. The apartment complex is located near C.E. King Parkway and Sam Houston Tollway.

The Boy Left His Apartment to Get a Jacket From His Family’s Car & Was Then Shot in the Parking Lot, Sheriff Ed Gonzales Said

OnScene TVAn 11-year-old boy was killed in a Harris County shooting on February 3, 2022.

“He’s only 11 years old,” Gonzalez said. “At this point we have very limited information.” Gonzalez said investigators haven’t learned what led up to the shooting and would be working to determine if an altercation or argument took place before the shots were fired. “What we know is apparently he had gone outside, apparently said he was going to grab something from the car and then this happened,” Gonzalez said about the boy.

The sheriff said people heard multiple gunshots and came outside to find the boy suffering from his wounds outside of the apartment building. “Gun violence has been a big problem,” Gonzalez said. “Ironically, in unincorporated Harris County, not any particular city, but unincorporated Harris County, we’ve actually started the year doing pretty well. We’ve had very little gun violence related to children so far in the first month. It’s only one month. But we were optimistic that at least we were starting off in decent way. And now this obviously happened.”

Gonzalez added, “So it’s something that is very concerning to us. We don’t want it to be like last year where we responded to 100s of scenes where juveniles had been shot. That is unacceptable. We can’t have that in any community. Violence in general is unacceptable, especially when it’s targeting young children. So this is a problem when young children are being shot and injured. So we have to do better, we must do better, and we will. We’re going to look at all the data and see what else can be done and continue different strategies to try to reduce juvenile crime.” 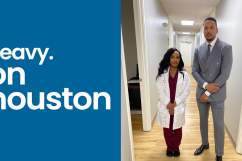 OnScene TVHarris County Sheriff Ed Gonzalez at the scene of a shooting that killed an 11-year-old boy on February 3, 2022.

Gonzalez said at the scene of the shooting that the Harris County Sheriff’s Office Homicide Division and crime scene investigators were at the apartment complex to canvass for any possible witnesses or other information. It was not immediately known if there was any surveillance video showing possible suspects or the shooting.

He added, “We were told that a male was spotted running from the location with a white T-shirt and an afro but we don’t know his connection to the scene. But that was something that was spotted when everything went down. So we’re just trying to determine exactly what happened. But tragically an 11-year-old has been shot.”

Gonzalez said a weapon was not found at the scene. He said, “If anyone has any information please call the Harris County Sheriff’s Office at 713-221-6000 or Crime Stoppers at 713-222-TIPS.” Heavy on Houston will update this report as more information is made available.