If there is one thing we do know about Miami Heat president Pat Riley is that he is always looking for possibilities and potential deals. He is also looking to finalize this new version of the Heat to be able to bring another NBA title to Downtown Miami as he might want to create one more superb team that could potentially perennially contend in the league.

According to reports, that one name that ends up being such an enticing prospect is that of All-Star point guard John Wall.

The former Washington Wizards star finds himself mired and disgruntled with the Houston Rockets and the possibility of a move is still in the cards. He could be one of the players that is sought after by many teams should the conditions be right.

The Miami Herald recently reported that he would be considered if the conditions were right for both sides.

The caveat is there- if it is right.

Is Wall Coming To The Heat The Right Thing?

This is a very good question to ask.  Wall is a player that was long linked to South Florida.  He enjoys being in this part of the country and has a residence here that he frequents during the offseason.

Well, it is a bit more complicated than that.

There are a series of problems that Miami would have to contend with if they would ultimately become adamant about bringing in John Wall.  The first order of business is that the team already offered Kyle Lowry a three-year contract while Victor Oladipo is returning very soon from the injury that he suffered.

Now there are other matters that are out of the Heat’s hands should they end up acquiring the All-Star guard.

What Are The Heat Willing To Do To Get Wall? 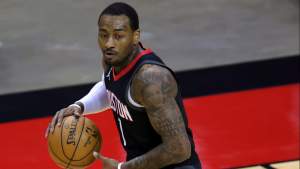 There is no doubt that any team that would be willing to acquire the former Kentucky star knows that his abilities are capable of lifting a team to the next level.  Wall’s career numbers have him in that light. Miami are one of the teams that have constantly mentioned t be signing Wall, albeit things did not work out the right way.

But there is one thing that would make Miami pull the trigger almost immediately.  If the Rockets decide to buyout Wall’s contract, it would not be a surprise at all to see the Heat jump in and sign him.

Although, at this moment, this might not be something that neither the team nor the player would like to do.  In the player’s case, a buyout would effectively see him renounce to the $44 million this year plus $47.36 million next year.

Wall finds himself on the outs with the Rockets organization and is planning on not playing this season, according to a report from The Athletic’s Shams Charania.

The major reason for this discord is that Wall finds himself in a stage in his career where he wants to be at a contender instead of a team that finds itself in the midst of what could potentially be a slow rebuild.

In 40 games in the 2020–21 campaign, his first year with the Rockets, Wall averaged 20.6 points per game, adding 6.9 assists on 40.4% shooting. Despite that being mighty impressive, it still Wall’s counting stats are impressive enough, but the final stages of his career it shows that he is not able to stay healthy.

This past year was another one where he was out for a significant amount of time due to ailments that limited his production.  The last four seasons, Wall played only 113 games.  Overall, the North Carolina native was active in less than a third of the games that his teams participated in during that time.

Loading more stories
wpDiscuz
0
0
Would love your thoughts, please comment.x
()
x
| Reply
The disgruntled point guard said that he would be willing to give a green light to a deal that would see him leave Houston