Houston Police Officer William "Bill" Jeffrey was shot and killed in the line of duty in Houston, Texas.

Houston Police Officer William “Bill” Jeffrey was shot and killed while serving a warrant in the Texas city on Monday, September 20, 2021. Another Houston Police officer was wounded in the shootout and the suspect was killed in the exchange of gunfire with officers. Jeffrey, 54, was rushed to a hospital where he was pronounced dead. The senior officer was a 30-year veteran of the police force.

Officers were serving a felony arrest warrant when the suspect opened fire, Houston Police Chief Troy Finner said at a press conference. Sergeant Michael Vance was identified as the officer who was wounded. The arrest warrant was being served at a home in Harris County. The suspect has been identified as 31-year-old Deon Ledet.

The officers were part of the Houston Police Department’s Major Offenders Unit, which serves high-level felony arrest warrants considered to be the “most serious.” Ledet had been accused of violating terms of his release while awaiting trial on methamphetamine charges, the Houston Chronicle reports.

“I want to ask for prayers for our city, our department and most importantly these families,” Finner said.

The Suspect Opened Fire on Jeffrey, Vance & Other Officers After They Talked to a Woman Who Lives in the Home, Asking if He Was There, the Police Chief Says

Houston Police officers were serving the warrant just before 7:30 a.m. in the Timber Ridge gated community at 5350 Aeropark Drive, officials said at a press conference. Houston Mayor Sylvester Turner said, “shots were fired and two of our police officers were hit multiple times.” Jeffrey, who would have been celebrating his 31st anniversary with the police department in December, “unfortunately he did not survive,” Turner said.

“We had officers assigned from the Major Offenders Division running a warrant,” Finner said. “They knocked on the door. Female comes to the door, have a conversation with her, ask where the suspect is, the suspect immediately came out and fired upon our officers. Unfortunately, striking Bill several times. And as we know, he succumbed to his injuries. Sergeant Michael Vance, thank God we got him here early and they’re working on him and he’s in stable condition.”

Finner said, “You’ve got a suspect with the female girlfriend, with small kids in that apartment complex and he still fired upon our officers. Officers returned fire, at some point striking the suspect. The suspect is deceased at the scene.” Jeffrey was airlifted to Memorial Hermann Hospital, where he was pronounced dead.

Finner said the investigation is being conducted by authorities in Harris County. The Houston Police Department and the district attorney’s office are also conducting an investigation into the shooting by officers. 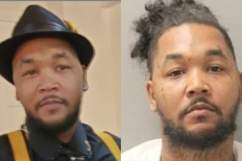 Jeffrey, ‘a Great Family Man,’ Is Survived by His Wife, Who Recently Retired From the Houston Police Department

Bill Jeffrey was a “great man, a great officer … a great family man.” His wife, Susanne Jeffrey, is a former Houston police officer who retired in December 2020. He is also survived by one child, officials said. Jeffrey had worked as part of the Major Offenders Division for 13 years, Houston Police said. Funeral arrangements are pending and details will be announced at a later time, the department said.

“31 years of service, just a few days shy of that,” Finner said. “Most of us know him personally. I’ve known him my entire career. His wife just retired, they were building their dream home. I want to celebrate the service of him and all of our officers around the nation and in this great city.”

“In talking with his wife this morning, Susanne, … One thing that she made very clearly to me this morning was, ‘Mayor, the city of Houston lost the very best. The very best,'” Turner said. “I wanted to echo that this morning because she was very emphatic about that. Let’s lift up his wife Susanne, let’s lift up the entire family of Senior Police Officer William “Bill” Jeffrey.”

Finner said, “Every police officer, every first responder is special. But like his wife said, he’s one of our very best. And I’m telling you, I’m going to celebrate that.”

Turner added, “This has been a tragic day today, it is another reminder that police work is inherently dangerous. Police officers never know what they’re going to face when they leave their homes during the course of their duty. … I’m going to ask the city of Houston to pray for both families. Pray for the Jeffrey family and pray for the full recovery of Sergeant Vance.”

Vance, 49, has worked for the police department since 1998 and has been a part of the Major Offenders Division for the past two years. He was undergoing surgery on Monday, but Turner said his condition was “fairly stable.”

READ NEXT: Woman Accused of Coughing on Mom & Daughter at Grocery Store Is Fired

Loading more stories
wpDiscuz
0
0
Would love your thoughts, please comment.x
()
x
| Reply
Houston Police Officer William "Bill" Jeffrey was shot and killed while serving a warrant in the Texas city. Another officer was wounded in the shooting and the suspect was killed.