Zombie Tsunami offers mobile gamers a different take in the realm of infinite running games. You make your way through 300+ levels while racing alongside a violent horde of hungry zombies. You’ll get your zombie horde up to insane levels be nibbling on the people that reside in each level. There’s power up’s to collect, hundreds of missions to run crazy through and 9 worldwide locations.

It’s possible to get more coins and add plenty of more zombies to your undead gang. With these top 10 tips/tricks/cheats we’re going to throw your way, you’ll have an even more awesome time running through each level.

1. Become Familiar with the Basics of Vehicles

As you run through the game, you’ll amass a large gathering of zombies that’s capable of turning over vehicles. After you turn over a few vehicles, you’ll cop a few extra brains. The three type of vehicles you come across needs a specific number of zombies to help overturn them. Check out the list below to know how many zombies you need to turn over automobiles and how many brains you’ll get for taking them down:

2. Work Up To Getting 4 Zombies at the Start of Each Level

As you purchase upgrades, you’ll notice that each upgrade moves up an ever increasing grid. Make sure you get your upgrades to the point where you begin to add more zombies to your starter set. You’ll know that you’re getting somewhere when you upgrade to a group of four zombies for the beginning of your future run’s. Those four zombies will certainly give you a boost when you’re taking down even more civilians and eating up brains.

Once you start the game, make sure you purchase some packs of civilians. Purchasing civilian power up’s and using them immediately will start you off even stronger during your stage runthroughs. Buying plenty of civilian packs may also be the way towards getting that tough-to-obtain 30-pack of zombies.

4. Stock Up on Scratch Cards

PocketGamer.Co.UK knows getting brains means filling the gird and getting those wonderful prize cards:

Each brain you collect during play is added to the grid at the end of a game. Fill the grid and you’ll get a scratch card as your reward. Prizes range from new backgrounds to bonus items – so concentrate on collecting brains if you’re trying to save money to spend in store.

PocketGamer.Co.UK also knows you should pay attention to the warning signs of incoming vehicles:

Large groups of moving vehicles can bring your game to an abrupt end if you don’t time your first jump correctly. Keep a constant ear out for their early warning horns and make sure you’ve got your tap finger prepared!

6. Sell Those Scratch Off Lottery Tickets to Gain Some Coins

If you’re looking to get more coins instead of random prizes from those scratch off tickets, then just sell them off. You’ll get a nice collection of coins if you sell ’em off, which seems like a better method than sometimes losing out on lottery rewards.

7. Get to Know About Those Giant and Ninja Zombies

Two great zombie types that you’ll grow fond of are giant zombies and ninja zombies. Giant zombies cause massive havoc by shooting lasers through its seven eyes, knocking over vehicles and collecting a massive amount of coins. As for ninja zombies, their sword can cut right through vehicles. No need to flip ’em over since you can slice ’em instead.

8. Save Those Upgrades for The Missions That Require Them

Sometimes you’ll encounter missions that require certain item upgrades. Wait until you get to those missions before you start purchasing the upgrades required to beat them. Upgrading an item before the mission comes up means you’ll have to pay twice as much coinage to beat the mission. Don’t harm your pockets by buying upgrades too early. But ’em when they’re required only.

WriterParty.com gave up a few tips on how to maximize your jumping distance:

To ensure that you make long jumps every single time, jump at the very end of each platform, right as your zombies are about to be one millimeter from falling off the cliff, and hold the jump until it’s completely done. If you do this every time, you will never miss a jump, unless you are late in the run and you have the quarterback power up, since quarterbacks tend to be slow.

10. These Tips Should Help You Complete the Long Jump and Flying Missions

WriterParty.com also provided a few tips on what’s needed to complete the long jump and flying missions in the game:

To complete the 2-second long jump mission, jump off of a higher platform onto a lower platform, and hold your finger down on the screen the entire time that you are performing your jump. Do the same thing with the dragon to complete the 20-second flying mission, when you unlock it.

If you have any extra tips and cheats you’d like to contribute to fellow Zombie Tsunami players, throw them in the comments section! 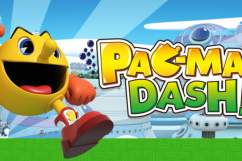 Pac-Man Dash!: Top 10 Tips and Cheats You Need to Know