The biggest map change to come to Fortnite in recent memory might be the one that’s currently happening at Holly Hedges.

In the last update, we saw Holly Hedges finally complete its transformation to Holly Hatchery, but that wasn’t just a simple name change.

While the location itself might seem very familiar to anybody just exploring the area, you’ll notice there are now three anti-gravity locations there. On top of that, you’ll be seeing Alien Parasites running around making a mess of things.

Lately, the start of a season hasn’t really been giving noteworthy map changes outside of a couple of name changes, but Holly Hatchery shouldn’t be slept on.

A third portion of Holly Hedges has become an Alien Zone! pic.twitter.com/rZ1c2o4hvT

Over the past several days, Holly Hatchery has been adding more and more anti-gravity zones to the POI, and pretty soon it looks like the whole area will be one big one.

In the image from Fortnite leaker FireMonkey, you can see that there’s just a small part of the area left that isn’t in an anti-gravity field. If you’re not a fan of how the game plays when you’re in the area, then you’ll want to avoid it.

We’re not sure what the plan is for the area yet, but the aliens do seem very intent on taking it over. Whether the anti-gravity zones will expand to other locations remains to be seen, but it looks like this is a mechanic that Epic will want to keep around for the foreseeable future.

The changes won’t be stopping at Holly Hedges either and, thanks to leakers, we know the Coral Castle’s days are numbered. We don’t know exactly when it’ll happen, but the one of the longtime POIs will be taken out in a future update and there are a lot of fans who are very happen with that possibility. 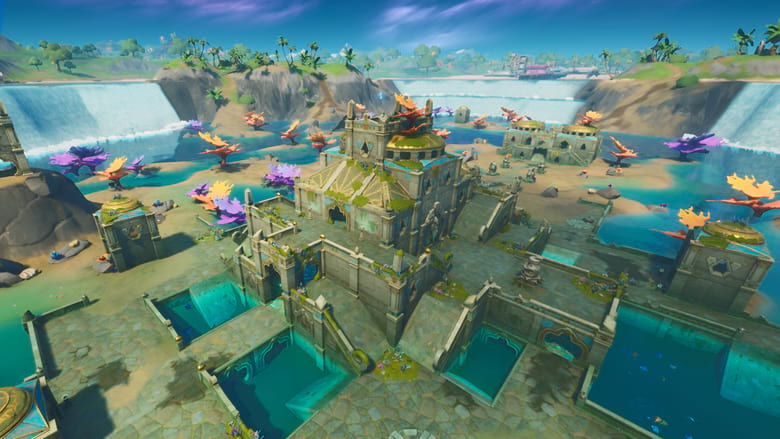 For a few weeks now, we’ve known that Coral Castle would eventually be wiped off the face of the map and replaced with a crater, similar to how Dusty Depot turned into Dusty Divot all those seasons ago.

While we never knew exactly how this would happen, the expectation is that the mothership that’s looming over the island would destroy it. So far, we haven’t seen the big UFO show any weapon capabilities, and the inside of it doesn’t even look all that threatening either.

However, if there are going to be significant map changes like destroying a whole location, we can’t think of another way Fortnite would be able to do it. We’re not sure why the aliens would want to start destroying areas on the map, but we’re sure Epic would explain it to us.

It’s not entirely clear if Doctor Slone is the one controlling the aliens or if she’s here to defend us against them. We do know that she’s working behind the scenes with some DC supervillains, so she definitely doesn’t have good intentions for the island’s inhabitants, but she might not want aliens destroying them before she can.

Loading more stories
wpDiscuz
0
0
Would love your thoughts, please comment.x
()
x
| Reply
Holly Hedges no longer feels like its old self in Fortnite.