Deadly 'Knockout Game' Spread by New Jersey Teens (VIDEO)A terrifying new 'Knockout Game' has caused deaths in Syracuse, St. Louis and New Jersey is sweeping the nation (they say). Innocent people walking the streets are targeted by groups of teens who aim to knock someone out in a single punch. Obviously this knockout game has cropped up every couple of years. Could social…2013-11-18T21:19:41.000Z

It’s the deadly, brutal, game that’s widespread in New York, Philadelphia and as far as London. The ‘Knockout Game,’ appears to involve teenagers approaching innocent victims and punching or attacking them in some way. The attacks are unprovoked and motivated purely as being part of a game, reports CBS News.

Here are the videos that have picked up of this deadly new craze:

This horrible attack happened in New Jersey, the video was uploaded on November 9:

This heinous attack happened in Pittsburgh on October 9, English teacher Jim Addlespurger was walking close to his school when he was attacked.

In this video, a group of New Jersey teens try to explain the nature of the “game.”

Watch in this video as the attack just walks on after striking a 63-year-old man in Brooklyn in September:

Knockout game? Assault on 63 year old man in BrooklynPolice are asking for the public's assistance in locating a male and female wanted in connection with an assault that occurred at approximately 0352 hours on Saturday, September 14, 2013 in front of 229 Knickerbocker Avenue in the confines of the 83 Precinct. The suspects approached the male Hispanic 63 year old victim, assaulted the…2013-09-29T22:21:29.000Z 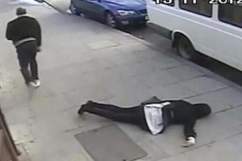