Ashley Roethlisberger is the wife of Pittsburgh Steelers quarterback Ben Roethlisberger. Big Ben was known for his playboy tendencies off the field before he met Ashley who seems to have straightened out the former partier.

The talented quarterback who stands at a looming 6 feet 5 inches has led the Steelers to four division titles in his 10 seasons in the NFL while capturing several career franchise records. After accusations of rape and a in 2008 and then in 2010 followed by a drawn out trial, he got himself together and found Ashley whom he married in 2011.

In 2013 he was rewarded for his community service efforts and contributions on and off the field when he received the Walter Peyton Man of the Year Award. He is now happily married to Ashley with whom he has two children.

Here’s what you need to know about Ashley and her marriage to the the big guy calling the shots in the Pittsburgh huddle:

Ashley Harlan met Roethlisberger six years before they married and they dated on and off since then. The couple was married on July 23, 2011 in Pittsburgh, PA. The Roethlisbergers did not live together until after they married to honor each other’s religious beliefs.

The charitable couple asked the 500 guests present at the wedding to donate to a foundation they started that gives money to the Ronald McDonald House and Children’s Hospital of Pittsburgh of UPMC.

2. They Have Three Children Together

Ashley got pregnant with their first child four months after the couple married. In November of 2012, she gave birth to their first child, Benjamin Jr. Baylee Marie Roethlisberger was born on March 19, 2014.

Ben said of his son in an interview with WDVE Radio:

It puts things into perspective. For me it’s like what’s important. You don’t really know love until you have a child and it’s pretty cool. I got up early and he was awake so we were playing this morning before I left to go to practice. The changes you see every day are just awesome!

The most recent addition, little Bodie Roethlisberger, was born May 26, 2016.

3. Ben Said Marrying Ashley Was Not an Attempt to Restore His Public Image

In 2008, Andrea McNulty, a former VIP casino hostess at Harrah’s accused of Roethlisberger of rape. He was accused of sexual assault again in 2010 of a college student Miledgeville Georgia, but the charges were dropped due to lack of evidence needed. The trial with McNulty lasted for two years until charges were dropped also because of the lack of evidence. The women all claimed he kept giving them more and more alcohol until they didn’t have any control or say in the situation.

The pattern rose many questions about Roethlisberger’s morals and the fact that he was able to get away with these actions, despite the lack of proof found in the trials. Ashley and the Harlan family received oppressive attention when Roethlisberger asked for her hand in marriage and her decision to marry the former Miami of Ohio star was highly scrutinized by the public. He ended up fighting off accusations that he proposed in order to revive his public image.

People will always have opinions of everybody and me, and that’s fine, they’re entitled.

People can say that it is whatever, but people who know and can see and are around us and know me, know that it’s something special when you find that person, and I’m extremely lucky.

I try to protect her as much as I can. People have gone to her parents’ house and have been doing some things. That bothers me a little bit because it’s what I do for a living, I have to deal with it, but her parents and her, that’s not what they have to do.

Ashley grew up in New Castle, PA and attended Laurel High School in 2004. There she was a star athlete in basketball, softball, and volleyball. Like Ben, she was a student-athlete at the collegiate level, going on to attend college at St. Francis University where she excelled at softball until she graduated in 2009.

5. She Works as a Physician’s Assistant

Ashley studied nursing and currently works as a physician’s assistant in Pittsburgh. She landed a job working in the cardiac surgery department of the Presbyterian Hospital in Pittsburgh. 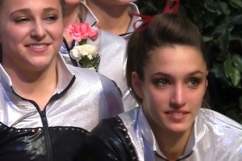